This is a money-driven developer project. 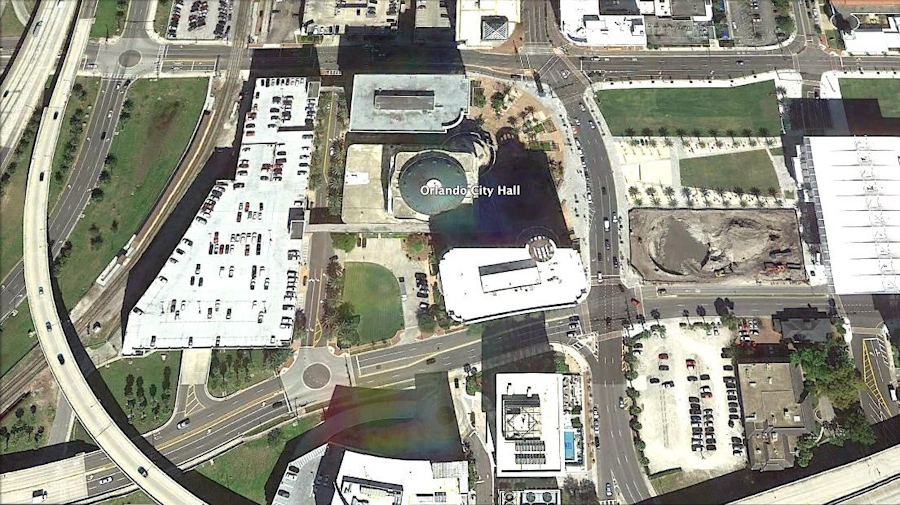 Orlando’s City hall is a nine storey ‘postmodern’ building constructed by the Lincoln Property Company and completed in 1992.

It replaced these embarrassing little elevated suburban boxes whose designer clearly bore the stamp of Harvard under the rule of Walter Gropius and his so-called ‘Total Architecture’, which despised and abjured anything to do with ‘The City Beautiful’. Its site is now the forecourt of the new building.

Once the new building was erected in close adjacency to the first, the old one was dramatically imploded in collaboration with a movie company to whom the film rights were sold. City hall 2 was a commercial venture from the beginning. The new building briefly occupied the entire city block.

but it was promptly trapped between two larger, taller office buildings, both part of the Lincoln Property Company deal with which it shares a formal garden.

The walled perimeter of this garden is dominated by the flanking office towers while the open perimeter exposes it to the noise and movement of a busy traffic intersection. This less than ‘civic’ space is laid out like the quarter circle of a wagon wheel with segments of grass, trees and ornamental shrubs alternating with footpath spokes that converge to find their hub in the elaborate corner entry to the City Hall. All this seems intended to intimate that ‘All roads lead to Rome,’ 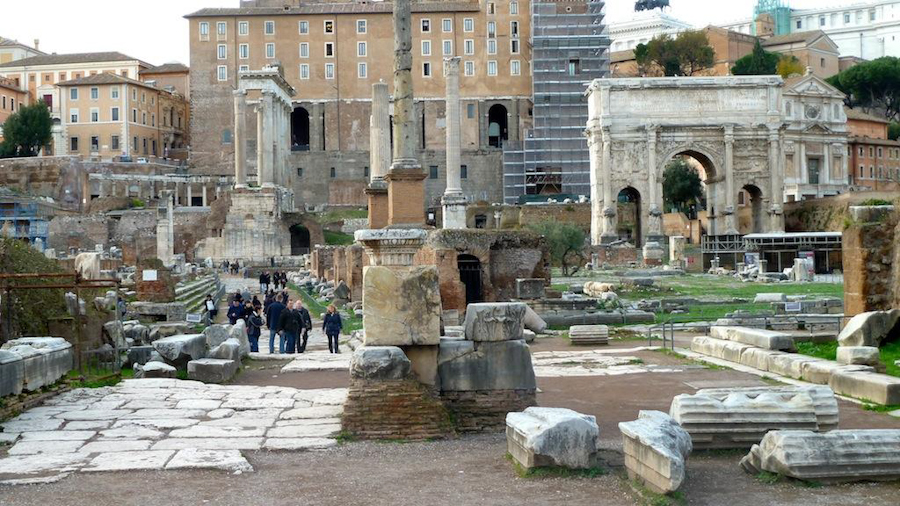 but this City Hall garden is no Forum Romanum -- where the scale was immensely grand -- and its little patches of grass and paving are entirely unsuited to present-day gatherings of any size.

Whether anticipated or not, welcome or not, the people of Orlando do assemble on the threshold of City Hall, but their gatherings are in spite of the ornamental garden, and the experience is marred by discomfort and danger. 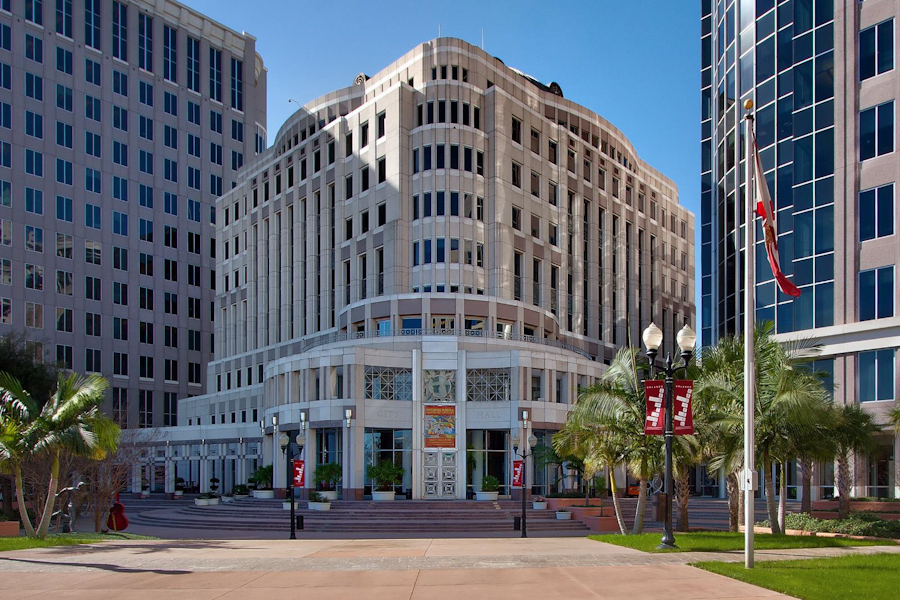 The same must be said of the City Hall building itself. Although it has a facade that sits squarely on the back edge of the forecourt and makes elevational mutterings about frontality and axiality, signals normally leading to the expectation that the entry point will be found at its center, the wagon wheel spokes of the garden have been arranged to converge, instead, on its right hand corner, where, quite casually, its steps also provide access to the corner entry of the office tower that nudges into City Hall across the intervening alley. Looking over at City Hall from their windows in this office tower, the occupants are treated to a left-handed version of the same contradictory mumblings as those of the front elevation.

The junction of the front and alley walls is recessed and rounded off -- something they like to do around here -- then bulges out onto the steps to produce a substantial three-storey hub to meet the garden paths. 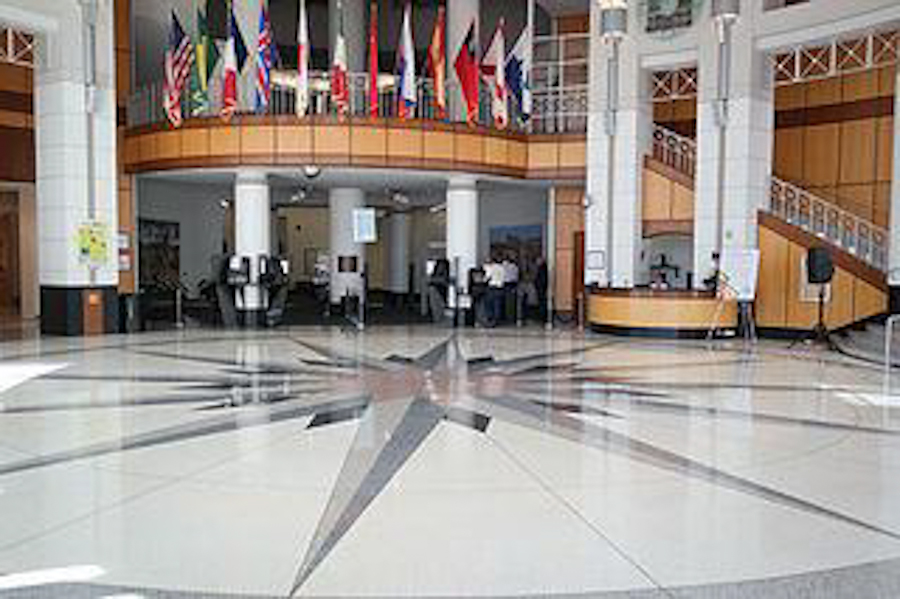 The first two storeys of this disconcerting protuberance contain a circular foyer, half in and half out of the building that hovers above, its weight diverted to foundations elsewhere in ‘the land of sand’ by means that are not made explicit and cannot be pretty.

Certainly their geometry will have little correspondence with that of the giant compass card inlaid in marble across the diameter of the foyer floor and furnishing confirmation, should any be needed, of the metaphor attaching to the wagon wheel of converging footpaths on the exterior: now we are without doubt that ‘all roads lead to Orlando’, and if ever some Floridian equivalent to the golden milestone of Caesar Augustus can be identified without alerting the folks over at Disney World, then a place awaits it in the center of City Hall’s foyer floor. Quite predictably, they call this space ‘The Rotunda’. 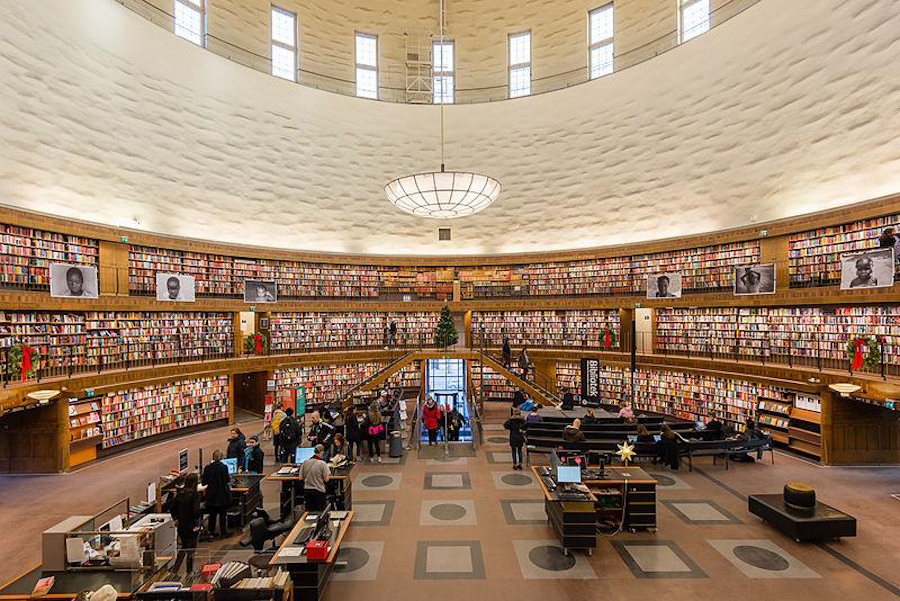 Rotundas tend to be rather generous in dimension, to have a fairly uniform perimeter of walls or combined systems of walls and columns overtopped by clerestory windows. Their other important characteristic is that they tend to be to be distinctly taller than broad, their loftiness bringing grandeur and aiding in the distribution of daylight, so if you encounter one in which the diameter of the drum significantly exceeds the height it’s likely to be one of those old steam age locomotive roundhouses with the engines radiating around a turntable, which have a dark and gritty splendour that is all their own. We shall see one or two more rotundas later, since they have kong been part of the architect’s arsenal of useful forms for city halls and state capitol buildings since at least the early nineteenth century, but in the meantime I cannot resist showing examples at both ends of the range: returning above to Gunnar asplund’s Stockholm public Library of 1928, which you saw a few moments ago, to see the rotunda inside the drum, and showing below the Baltimore and Ohio Railroad roundhouse at Martinsburg, West Virginia.

The folks in Orlando can, of course, call their circular space whatever they please 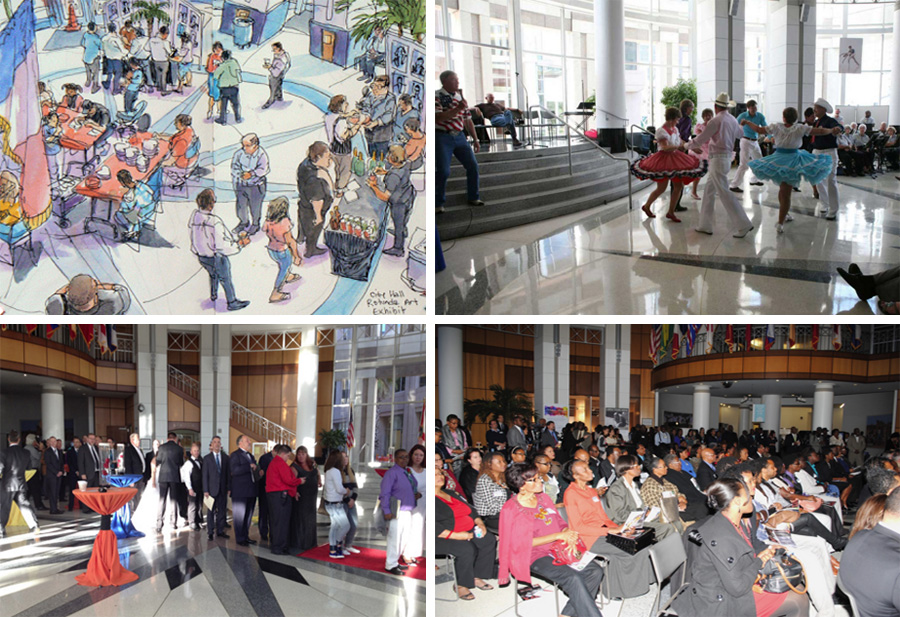 but this conceit, this half in, half out, half too bright, half too dark and gaudily detailed hub to the external cartwheel is clearly no better suited to the accommodation of indoor gatherings and public functions than the garden outside is suited to gatherings in the open air. Seen above are an art fair; a country dancing class; a group gay marriage ceremony; and a Black History Month lecture.

Happily this is the last developer city hall for which I have been able to find illustrations.