An ill-conceived and feebly decorated cube sitting in a vast parking lot in a low density industrial wilderness, claiming no ties to the city it serves but to Robert Venturi and his insidious "Learning From Las Vegas."

This is the first of my cautionary tales.

Corpus Christi, present population about 320,000, has a thirty year old city hall designed by Taft Architects (an acronym for a Houston firm with no connection to the Taft family of Cincinnati). This city hall could be said to be another economical cube, like Como, but quite plainly, it ain’t no Como!

The location of the building embraced the automobile and the concomitant notion of its own hermetic self-sufficiency with such unrepentant vigor that its remaining urban and architectural gestures have been rendered meaningless. It sits the best part of a mile from the city’s downtown and Ocean Drive, occupying the midpoint on the north side of its four-block parking lot, amid a small-scale industrial wasteland that appears to have been persistently indifferent to its presence, content meanwhile to extend allees of trees out among its automobiles as though they were the colorful parterres of some shiny new formal garden, the Villa Medici of Corpus Christi.

Its relationship to downtown.

Its frontal prospect is this blighted little street, which it terminates as though it were some grand boulevard in the ‘City Beautiful.’

Tacitly acknowledging that in this location an intervening apron would be superfluous, an equally superfluous flight of steps ascends to the unused street entry directly from the perpetually deserted sidewalk. The flagpole invites no gathering of the citizens on July 4th, no celebration of the city’s name day, no public event of any kind, whether joyful or in protest. 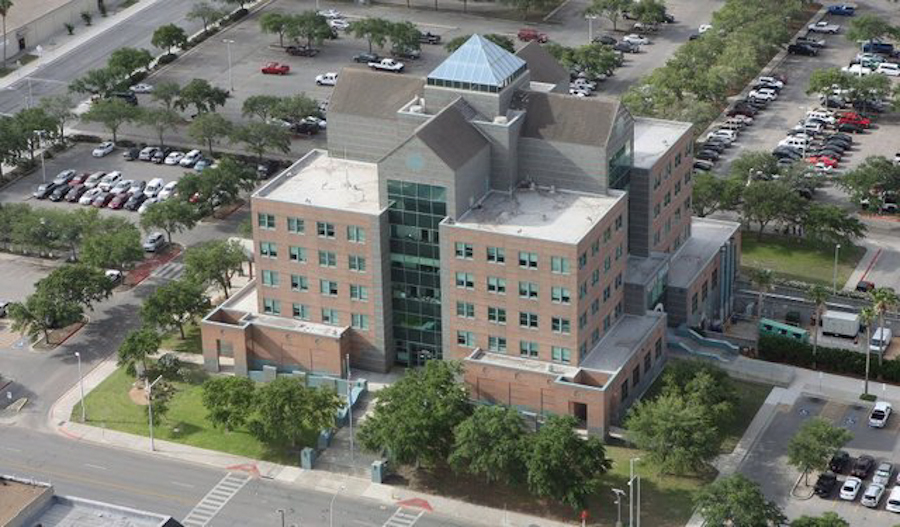 The building’s other three sides provide the same monumental access to the surrounding parking lots, even to identical ‘City Hall’ marquees. This provides the rationale for the cruciform symmetry of the plan and the vertiginous light shaft raised above the crossing. This shaft, by the way, they refer to as ‘the atrium’.
And maybe one needn’t bother with any further consideration of a facility that is so clearly less than ideal, but bear with me because it provokes a few additional thoughts that one hopes may be useful. First, let the buyer beware of loose architectural language, whether drawn or spoken! 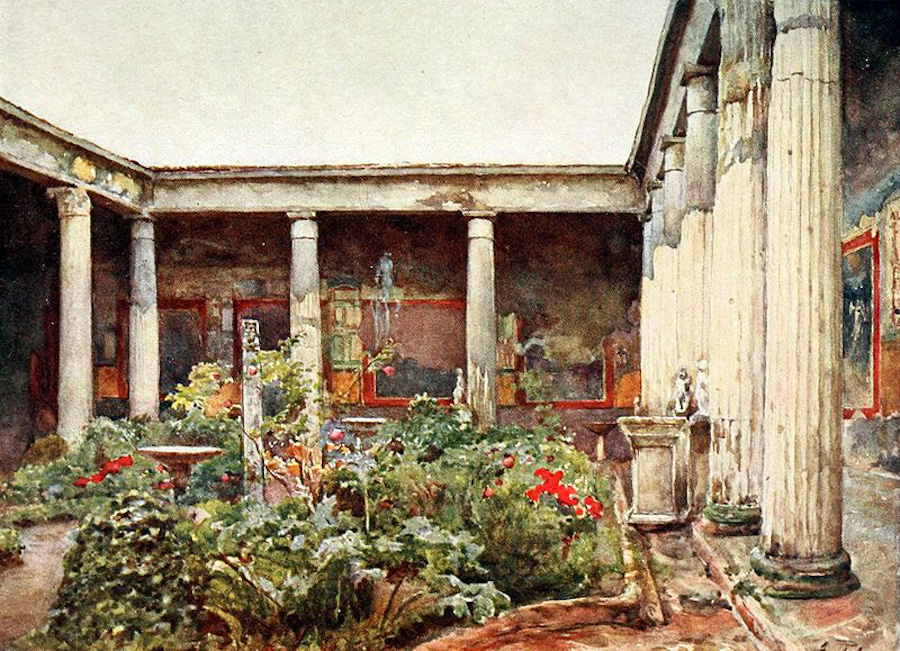 We have already seen a lofty atrium in Mississauga, and in Camo the heavily structured central space roofed with glass block to temper the northern Italian sun, also an atrium. Here is a Frank Fox illustration of an early atrium, open to the sky. As with preceding Mediterranean cultures, the domestic life of the Romans throughout their empire was arranged around atria, as here at the house of the Vettii in Pompeii, where the likelihood is that the intensely cultivated gardens within the columns created ornament largely with plants that were aromatic, edible and medicinal 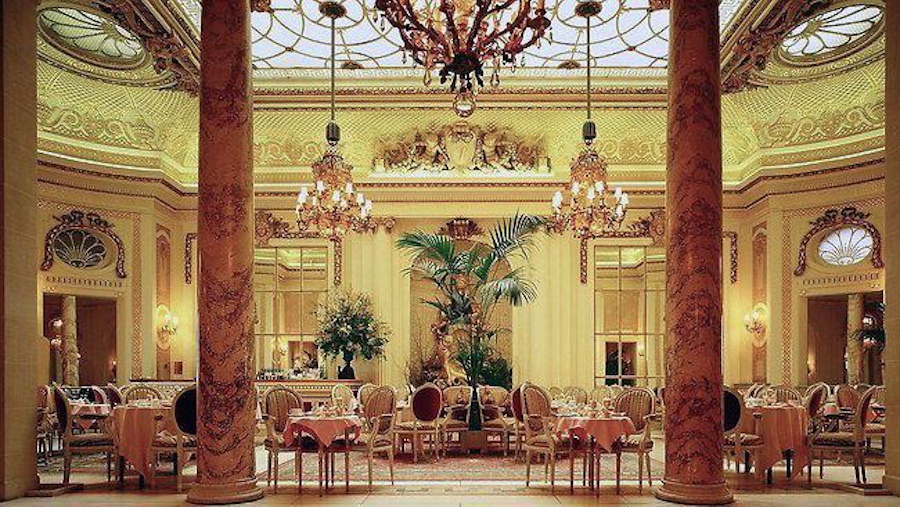 In our own times the more splendid of the grand hotels, such as London’s Ritz, have atria with the lightest of glazed roofs, commonly called ‘palm courts’ or ‘garden courts.’

San Francisco’s pre-earthquake Palace Hotel had a vast atrium which was first used as a glazed courtyard for horse-drawn cabs and then as a lofty dining room. After the great earthquake, its 1910 replacement also has a grand atrium. 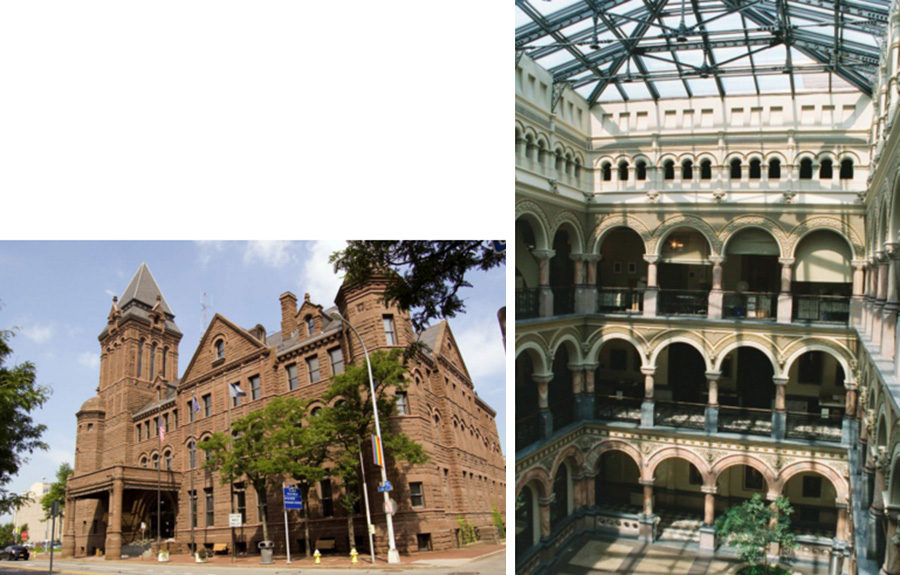 And so does this fine old Romanesque Revival structure, formerly the Federal Building and now the City Hall in Rochester, New York -- its front once again affirming Siena’s republican grip on the iconography of late nineteenth century American public architecture. It, too, has a fine atrium. 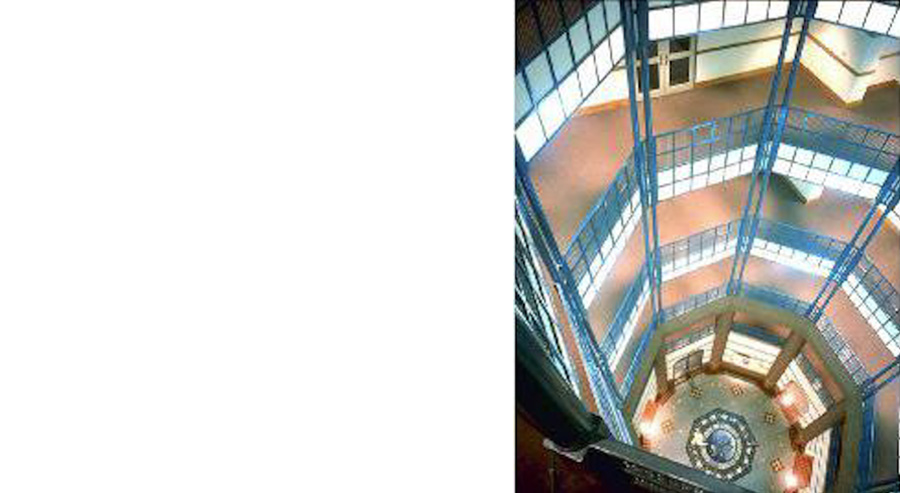 Corpus Christi, on the contrary, has a narrow, octagonal and vertiginous five storey shaft raised above its entry lobby. The glazed smoke screens suspended from the ceilings around its perimeter to appease the local fire marshal would appear to be doing double duty as fluorescent light fittings, because there cannot be much daylight admitted from above: this they call ‘the atrium’? 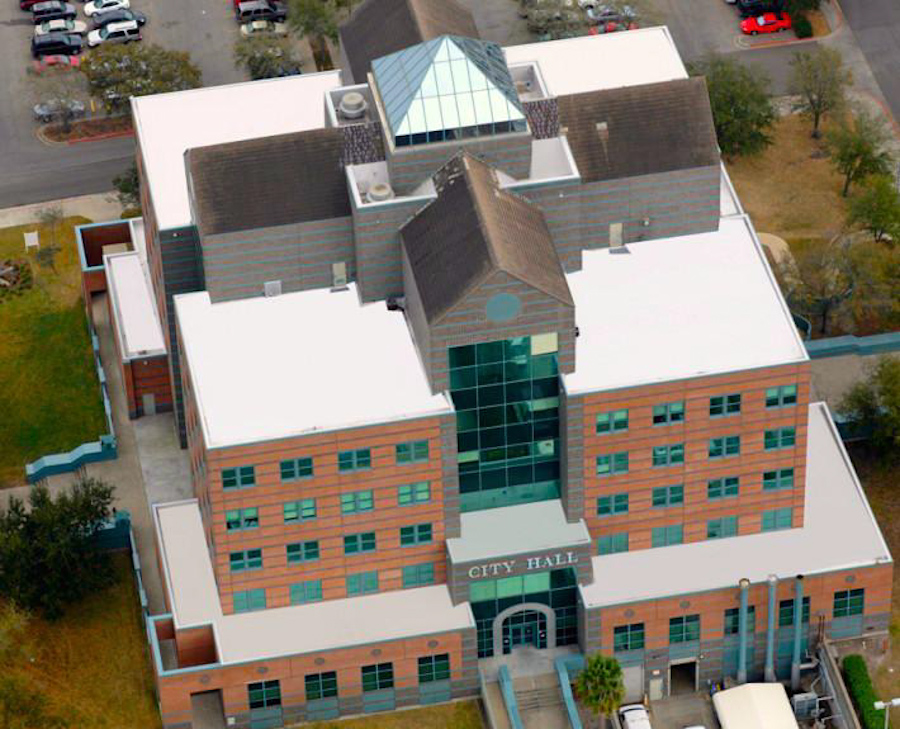 Then, confronted by the busy exterior of the building one has to assume that the candid expression of such potentially powerful things as squares, octagons and cubes must have been a little too direct for the taste of Taft Architects: why else did they feel constrained to complicate the building’s profiles and differentiate the colors of its masonry skin? One might imagine that the idea was to erect a monument to their one idea, the quadrilateral symmetry of the plan but, by the inadvertent irony of ironies in a now heavily secular Corpus Christi, the resulting forms also carry the strong implication the nave, choir and transepts of some distressed little church trapped and squeezed between buttressed cubes.

The above elevation happens to face the east side parking lot, the street being off to the right. Given its surroundings, the prospect has to be equally depressing from any of the apertures in this building, but why is there no accommodation of the movement of the sun, no acknowledgment of the profound difference between facing north and facing south? But let’s return to the question of what they failed to think about once we’ve finished looking at what they did think about. 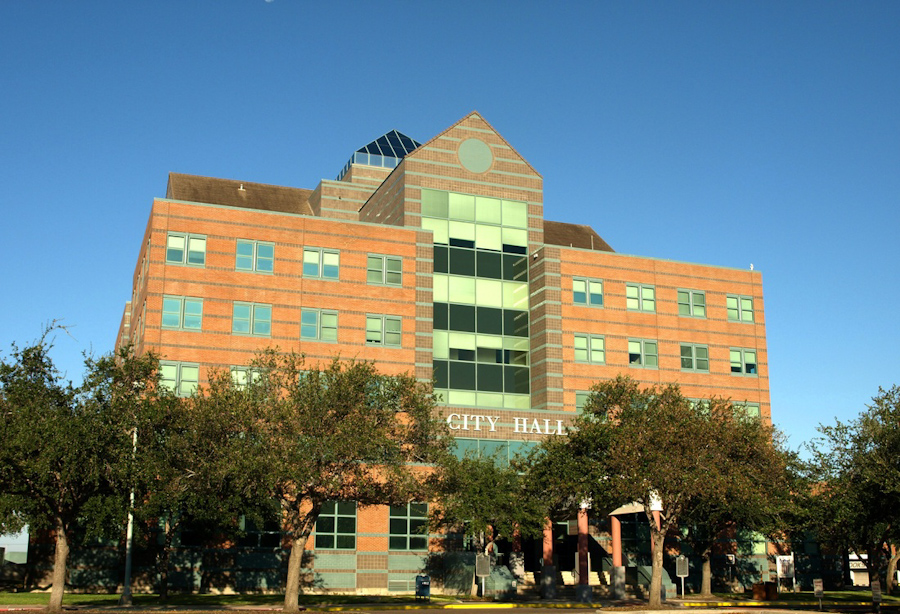 What they thought about was stripes. Perhaps in an effort to pull all the pieces together again, they reverted, like modern day John Hannafords, to drawing mindless pilasters (some light, some dark), skinny uniform string courses and and even vacant clock faces ( or blind rose windows, maybe?!) on surfaces that might actually have defined calm, generous volumes -- like Gunnar Asplund’s Stockholm City Library, say, which we saw Jones and Kirkland re-employ as Mississauga’s council chamber -- if, as then, given a little rhythm and then left alone? 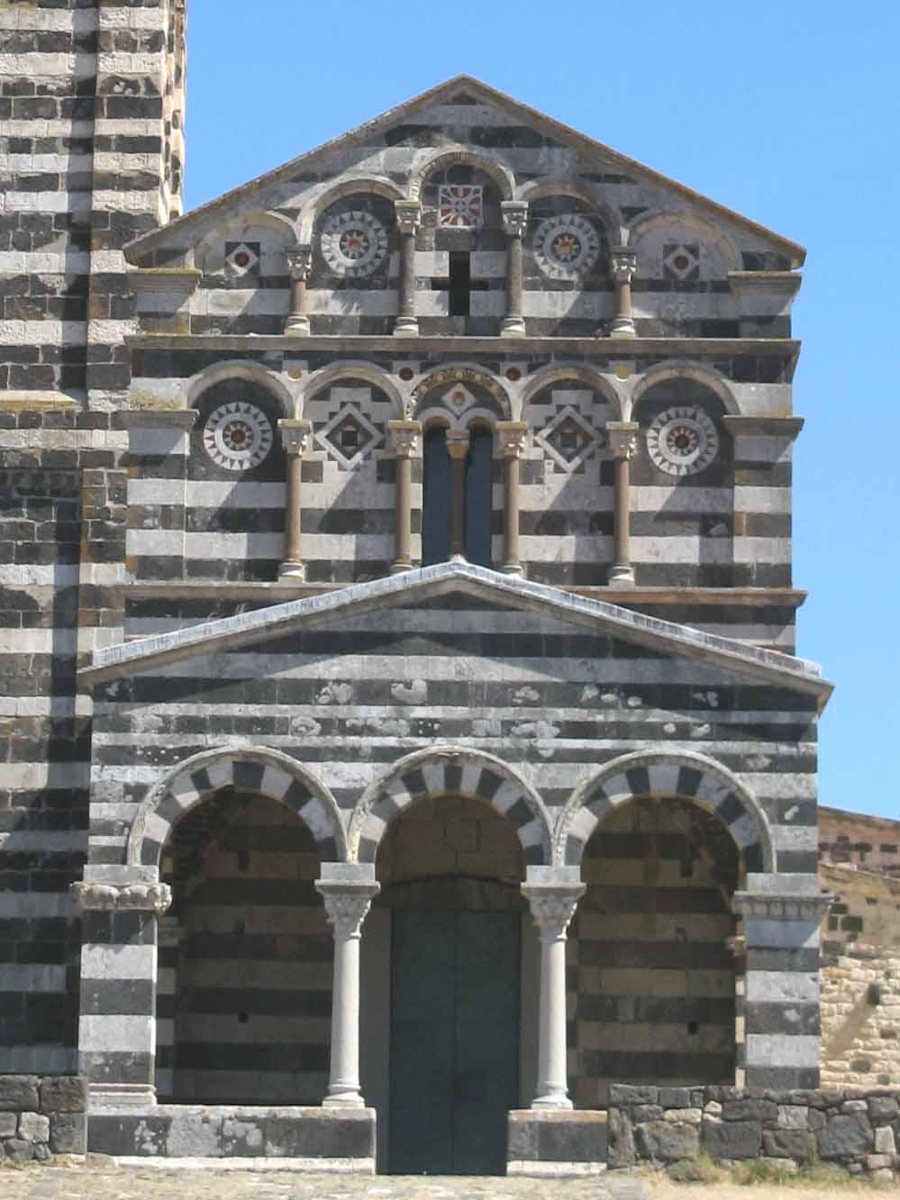 But if simple volumes were too boring for them and more elaborate volumes just had to have pilasters, stripes and non-clock discs then the Romanesque period would have offered them endless captivating models, as here at the charming little baptistery in Saccargia, Sardinia, built in 1116. Too much for a parking lot? 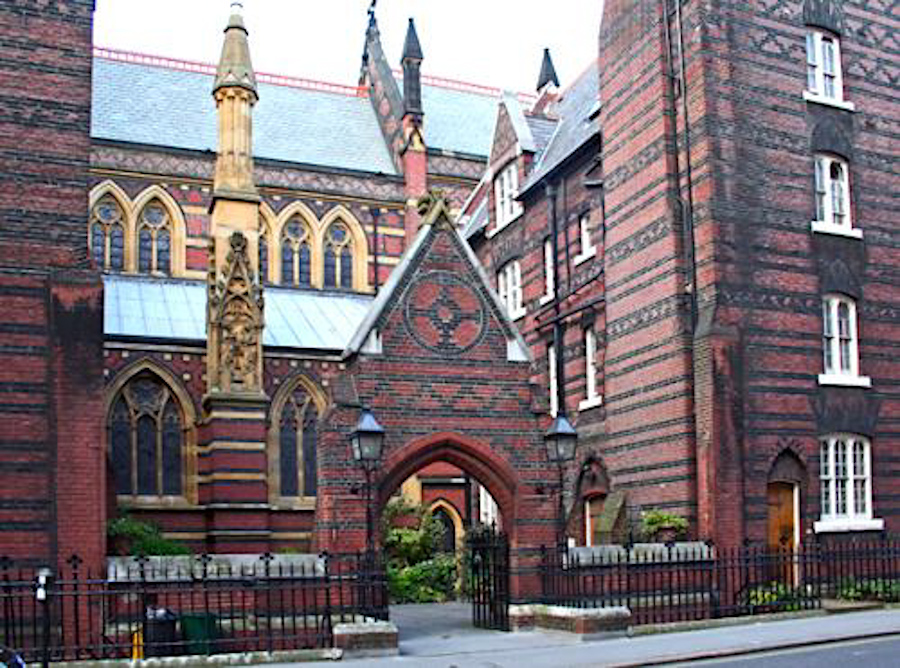 Well, if the Romanesque were too raw and robust for their taste, then one of the period’s great revivalists was William Butterfield, for whom stripes were de rigeur, and who banded everything he built, inside and out, as here at All Saints, London, of 1850-53. It might be amusing to note in passing that Butterfield’s pediment disc is inscribed with a cross which closely resembles Taft’s simple minded and ill-advised plan, all too inescapably emblematic of the 500 year-old origins of a now heavily secular settlement. 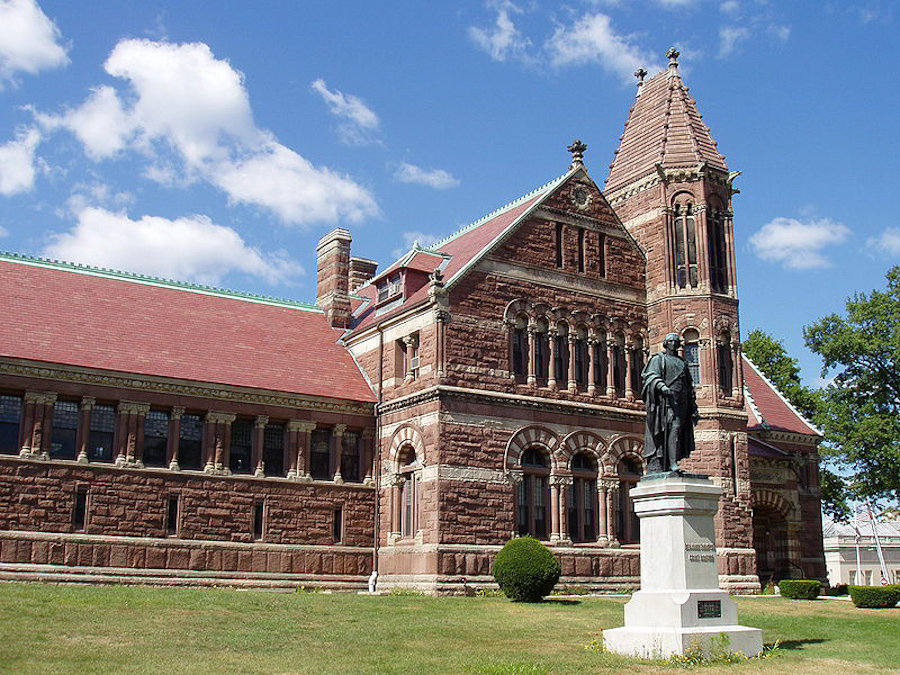 But if all this were deemed too Eurocentric, then closer to home there is H.H. Richardson, who employed banding with powerful intelligence to delineate elevational relationships and to imply sectional and volumetric relationships, as here at the Woburn, Massachusetts, Public Library of 1876-79. 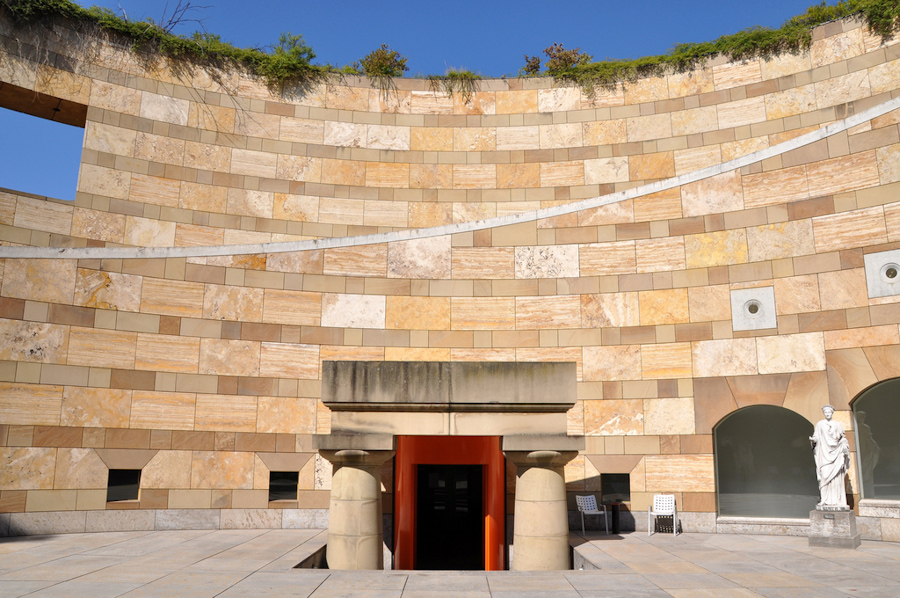 And if, finally, Taft Architects were loath to dirty their hands with any history at all, they still might have learned something had they given a little attention to the work of their contemporary, the late Sir James Frazer Stirling who, with no such squeamishness, developed an affection for Romanesque banding and used the thin veneers afforded by recent stone-cutting technology with wit and irony in several of his later projects. These photos show his extension to the Stuttgart Staatsgalerie, opened in 1984, some years before Corpus Christi.

Finally one must observe that the lugubrious landscape surrounding Corpus Christi’s hermetically conceived city hall might best and most consistently have been dealt with by turning its back on it and looking inward instead, as for other reasons, did the medieval monks in their urban cloisters and colleges. Below is Johannes Kip’s early eighteenth century engraving of the College of Gonville and Caius in Cambridge, illustrating an architectural tradition that this college has maintained into modern times. 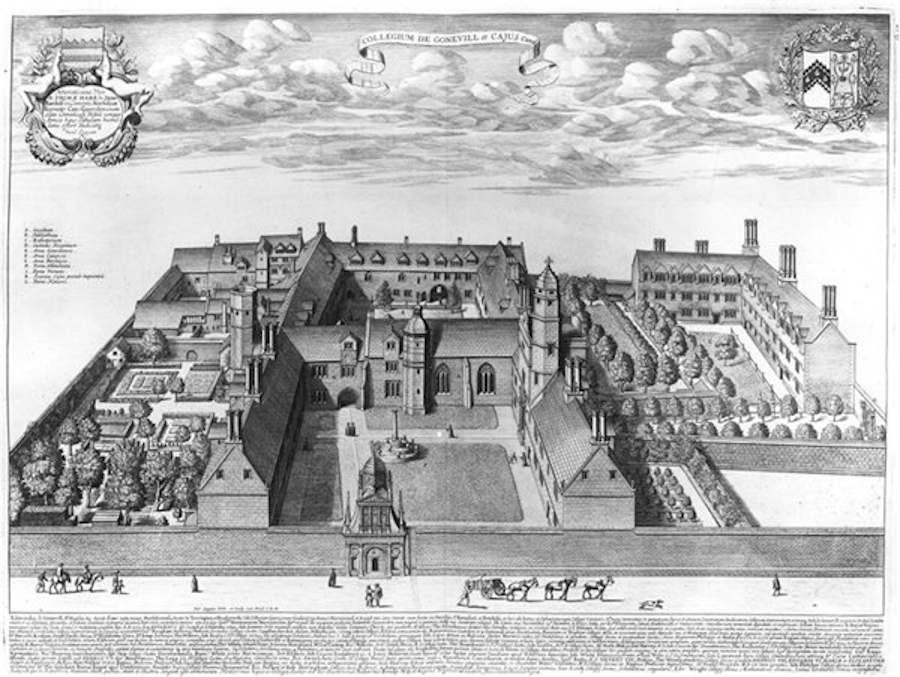 Gonville & Caius’ Harvey Court, designed in the office of Professor Sir Leslie Martin in the late 1950s, presents a deep wall of stairs and utility spaces to the street and has views to the outside only where the prospect is controlled by the college. Its raised court, which surrounds an atrial refectory, was inspired by Alvar Aalto’s Saynatsalo Town Hall of 1952, which we saw above. 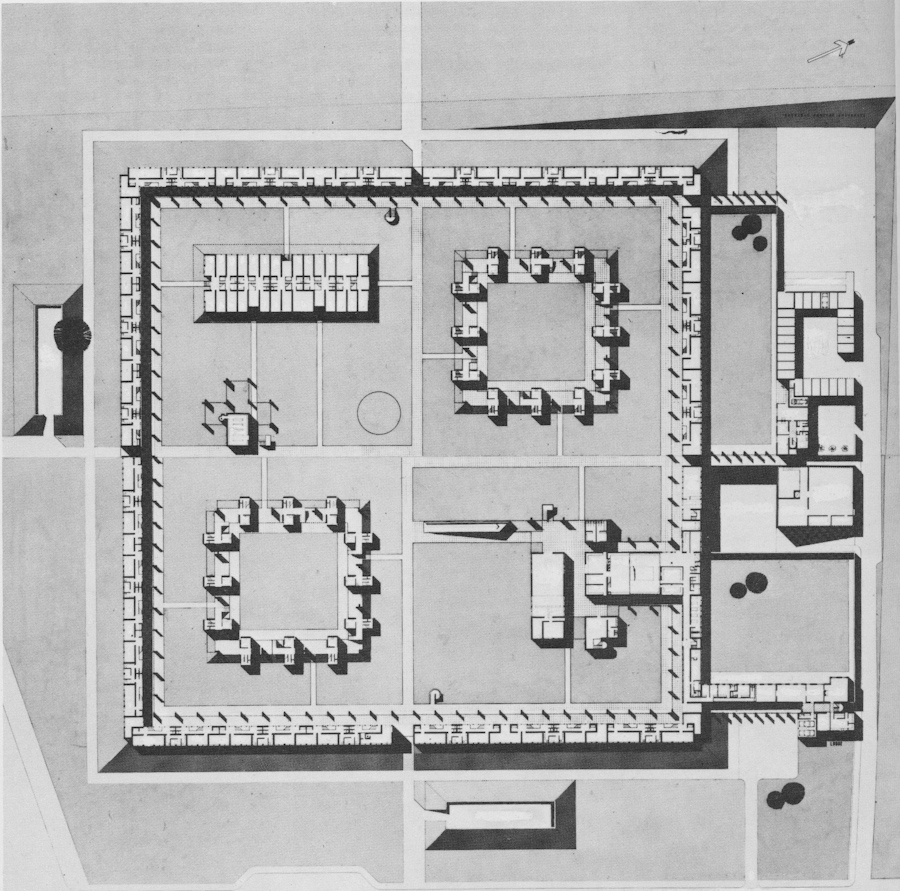 Given a large enough city hall program forced out of the urban core to the cheap land of the automobile in the suburbs one could readily imagine a re-enactment of the Roman creation of the city with a city hall urban services campus, not unlike this Stirling and Gowan submission in the Churchill College, Cambridge, competition of 1959. In those days, the site for this project was on the far limits of the University’s academic residence area, joining the long isolated Girton College for women out in the fields on the maximum three mile radius from the Senate House. The two bunkers outside the walls are for student bicycles and the little fauxburg clinging to the right hand wall contains college support services. 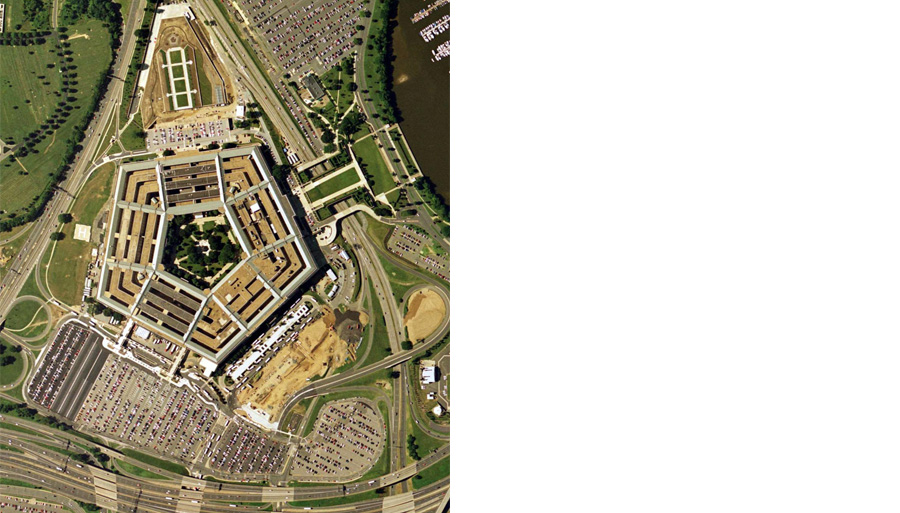 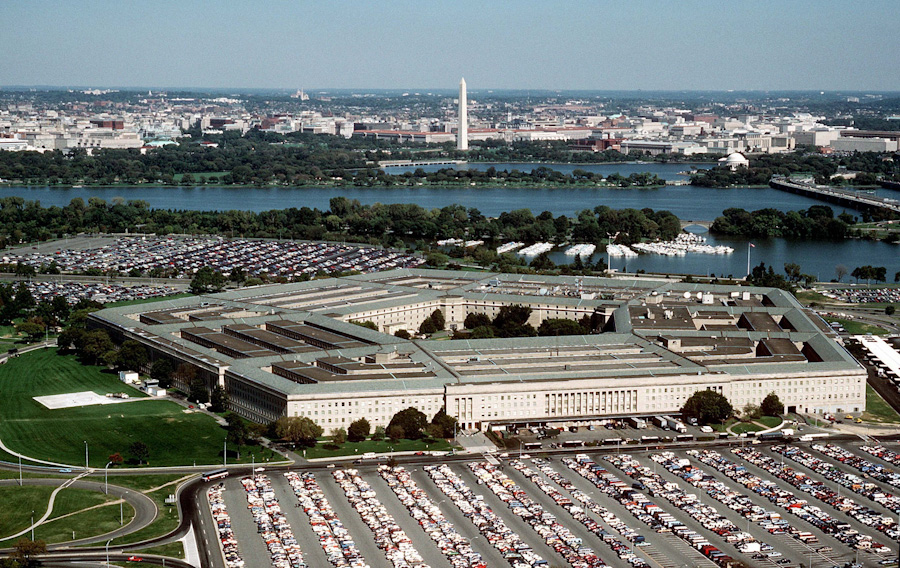 The Pentagon. of course, quite unable to make any long-term demarcation of departmental territory and not primarily concerned with making anyone’s life more livable in any case, carries the idea of the institution as auto-dependant walled city to an extreme, closing off so many views to so many occupants as to be indistinguishable from a gigantic prison.