A city hall of very adequate if modest dimensions and a world renowned tour de force as a recapitulation of the renaissance palace in the terms of twentieth century Italian Rationalism.

This is one of those things long known and revered. Giuseppe Terragni’s Casa del Fascio, completed in 1936 to house the municipal offices of Como in the days of Mussolini, could rightly be seen as a simple economical cube, but this would not begin to describe it. Terragni exercised an unparalleled discipline in the ordering of the plan and section, in determining the building’s response to the scale and proximity of its surrounding context and the views it might afford (which were significantly more generous then than now), its response to the arcing presence of the sun, its articulation of the internal functions on the exterior surfaces, and the proportions, rhythms and modeling of the facades. 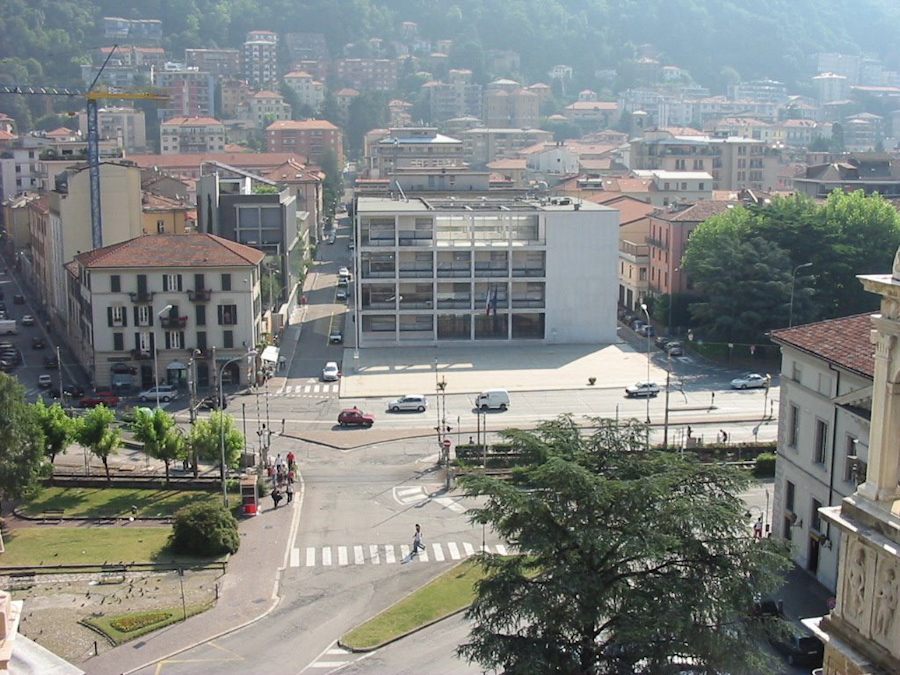 The Casa del Fascio seen from Como’s cathedral of Santa Maria Assunta. The building was conceived as the modern day equivalent of the Renaissance palazzo, arranged around a two storey glazed atrium and exhibiting a high degree of transparency. ‘Fascism is a glass house’, Benito Mussolini had declared to Terragni. ‘In architectural terms this means clarity and honesty in construction,’ he had said. Terragni, a native of Como, embraced the Duce’s program. 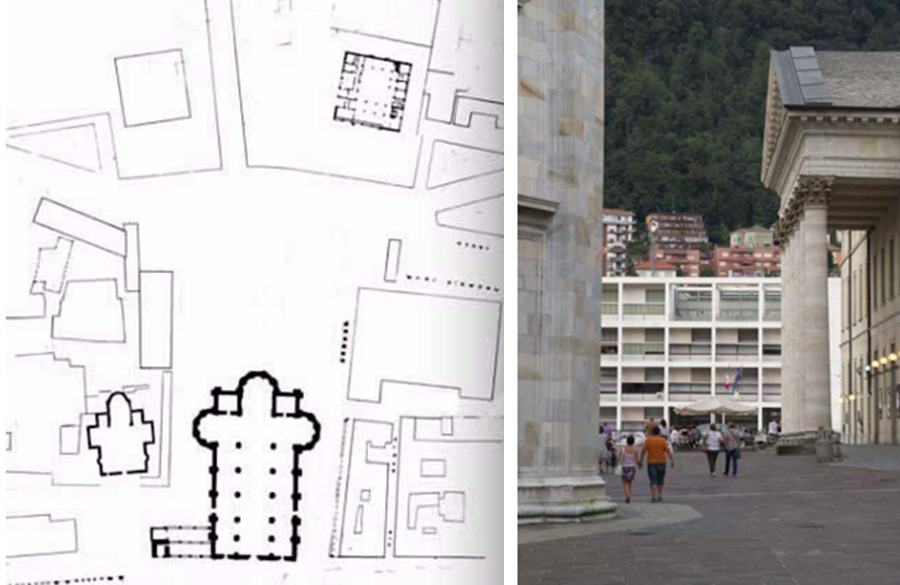 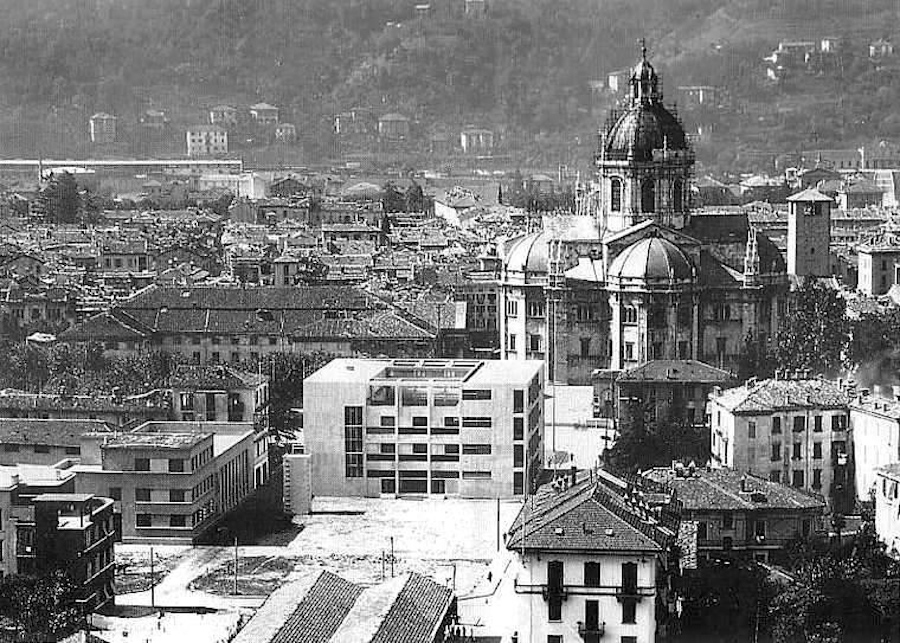 The opposite side of the building prior to the additional development now occupying the remainder of the block, the extent of which was clearly not anticipated by the scale of this elevation: the two-storey stacked ‘giant order’ of its three central bays, perhaps more clearly seen in one of the drawings below; their generous openings on the ground and top floors, which mirror those of the front facade and, by means of the atrium, unite one piazza with the other; the large, slightly protrusive transparent opening of the staircase on the left; and the floor-to-ceiling window openings on the right. These all address a much more generous space than the present service yard. 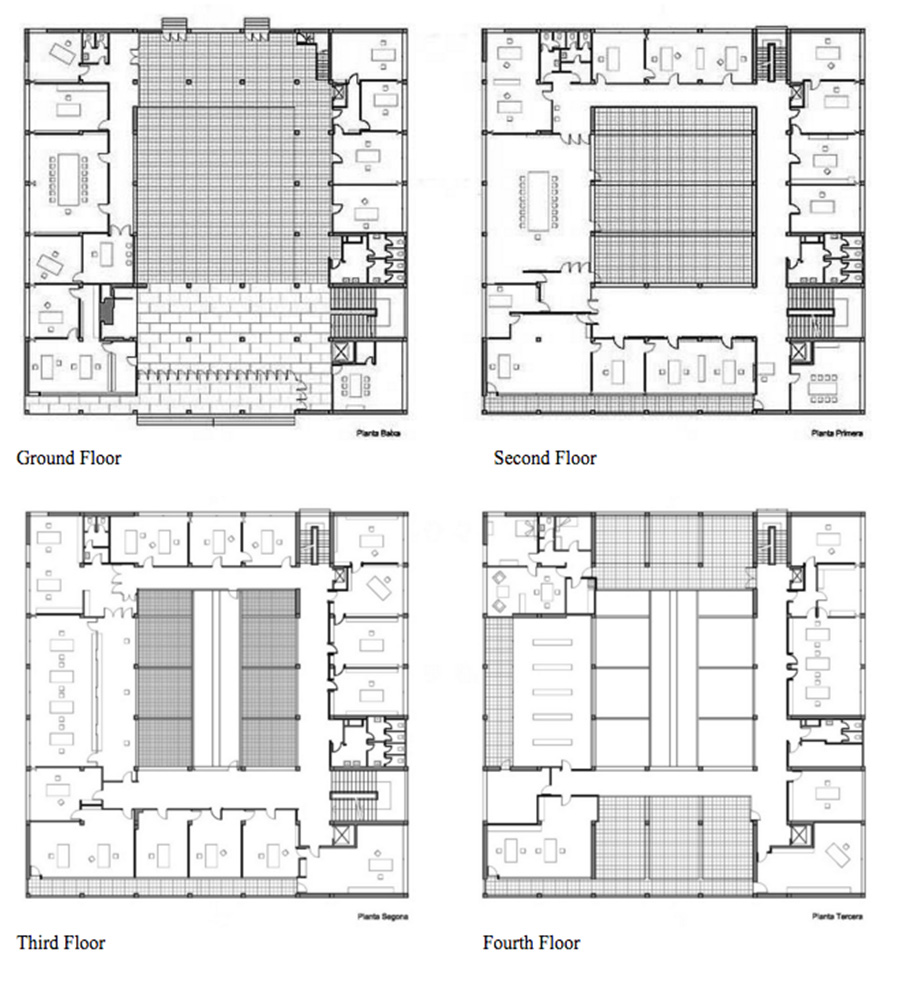 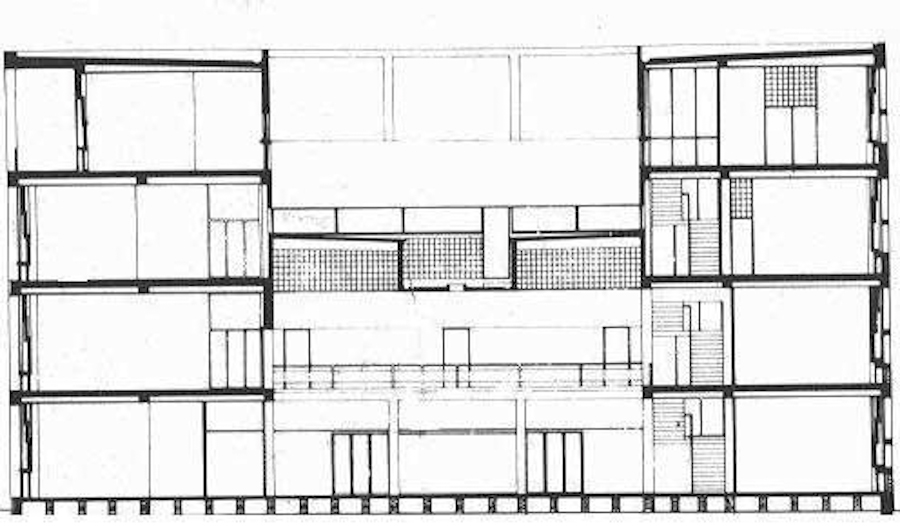 Section looking east. Note the difference in the depth of the street walls: the shallower sunless north wall (left) and the deeper, sun-invaded south wall (right). 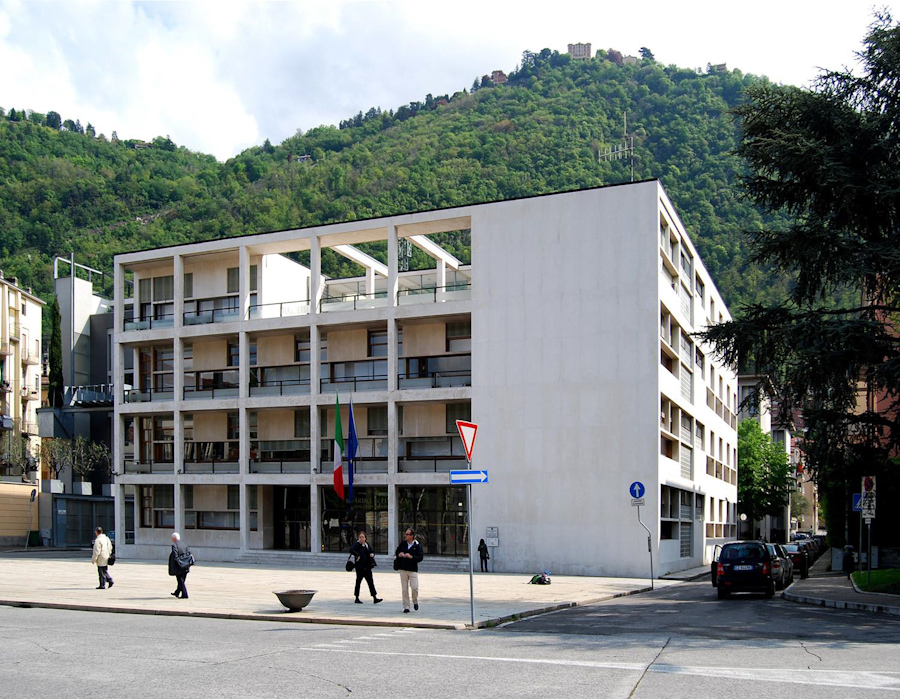 A three-quarter view of the Casa del Fascio. The balcony layer behind the columns of the west facade fronting onto the Piazza del Popolo, endows the structure with scale and monumentality, and provides the office walls with protection from the afternoon sun, while the deeply articulated fenestration of the street wall provides protection from the southern sun. 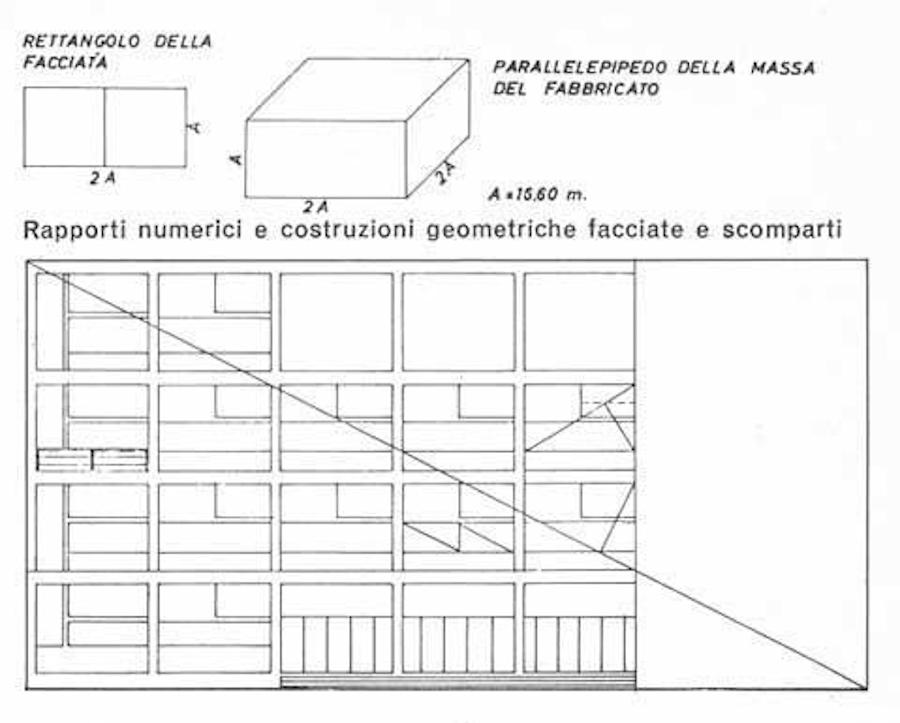 Each facade is a double square, the monumental west front, the simplest of the four facades, being gridded by uniform floor and column thicknesses into 4 equal floor heights and 7 equal but slightly larger bay widths. The diagonal of the double square becomes the ‘regulating line’ establishing the proportion of the subsidiary surfaces in the composition. The other three facades offer deceptively subtle variations on this theme. Common to all the facades are horizontal strip windows set at a height to provide seated occupants with a more or less panoramic view to the outdoors, while higher apertures of half their width furnish daylight to the rooms, except on the north wall where the larger rooms are centered and most of the glazing runs from sill to ceiling. Where transparency is undesirable or unnecessary glass block offers both daylight and privacy and adds to the local interest of the facades, inside as well as out. 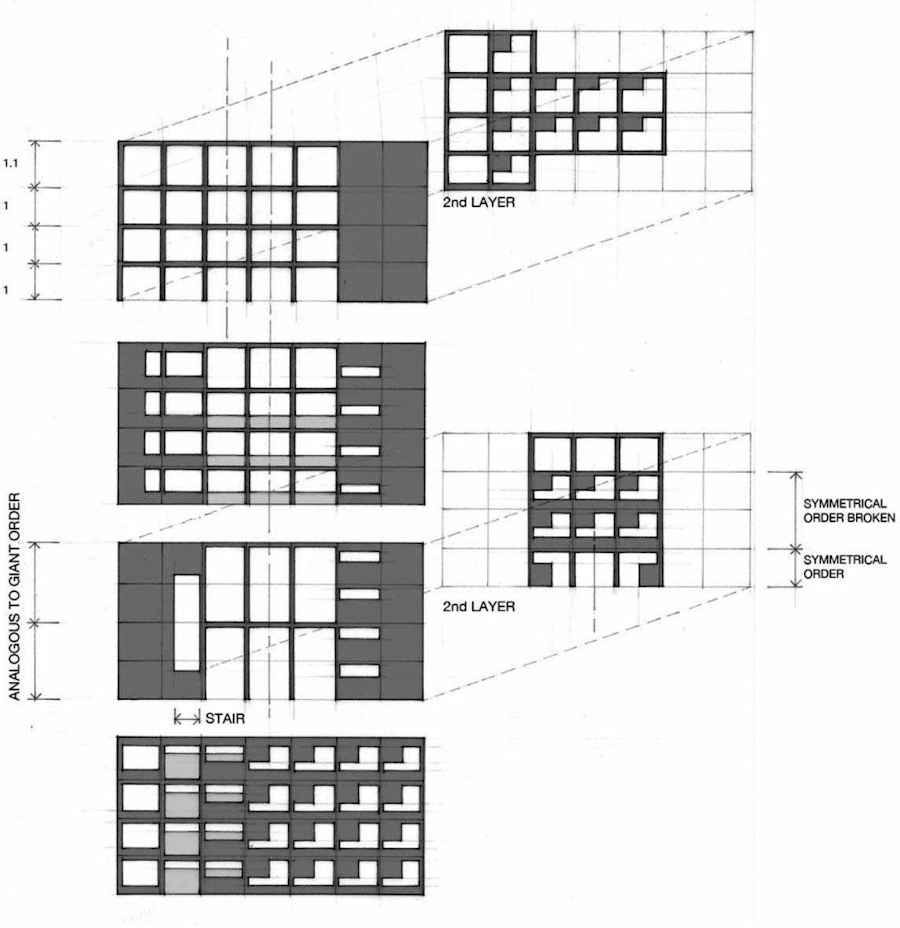 A simplified diagram of the elevations showing the deep layering of the balconies within the west wall and a shallow recession in the east wall, which simply articulates the giant order of the three central bays. 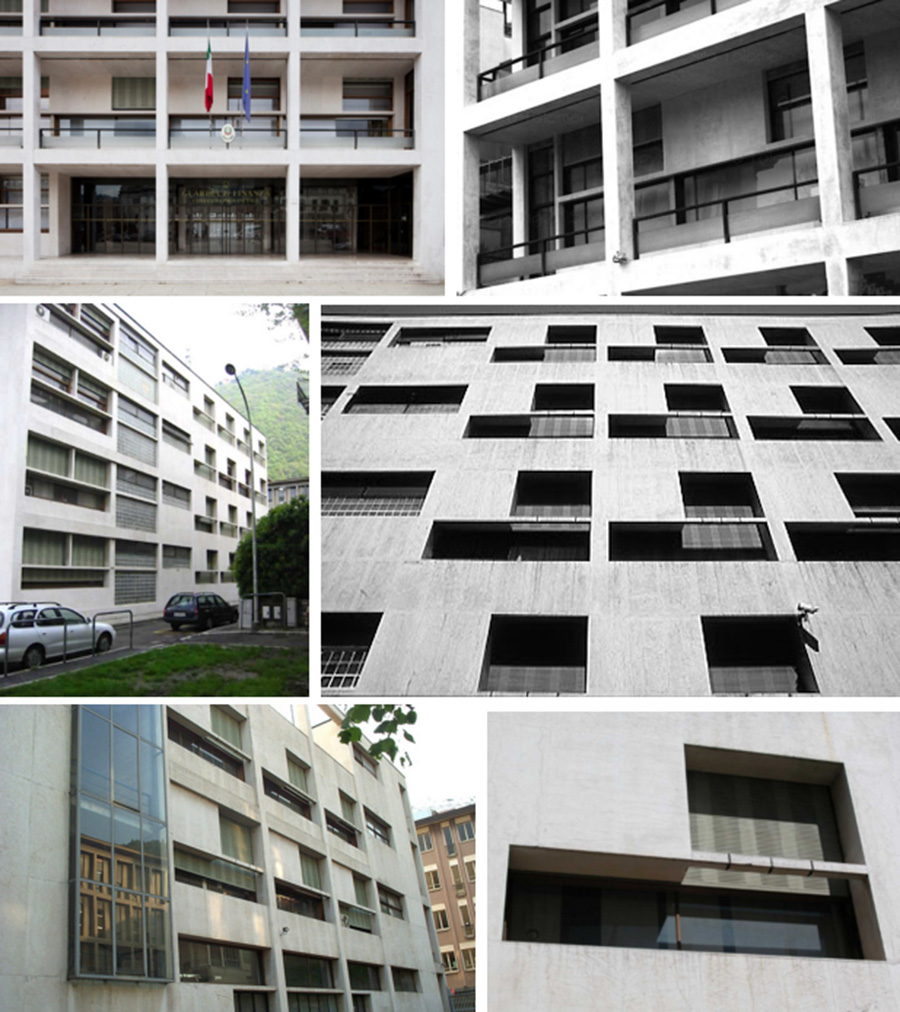 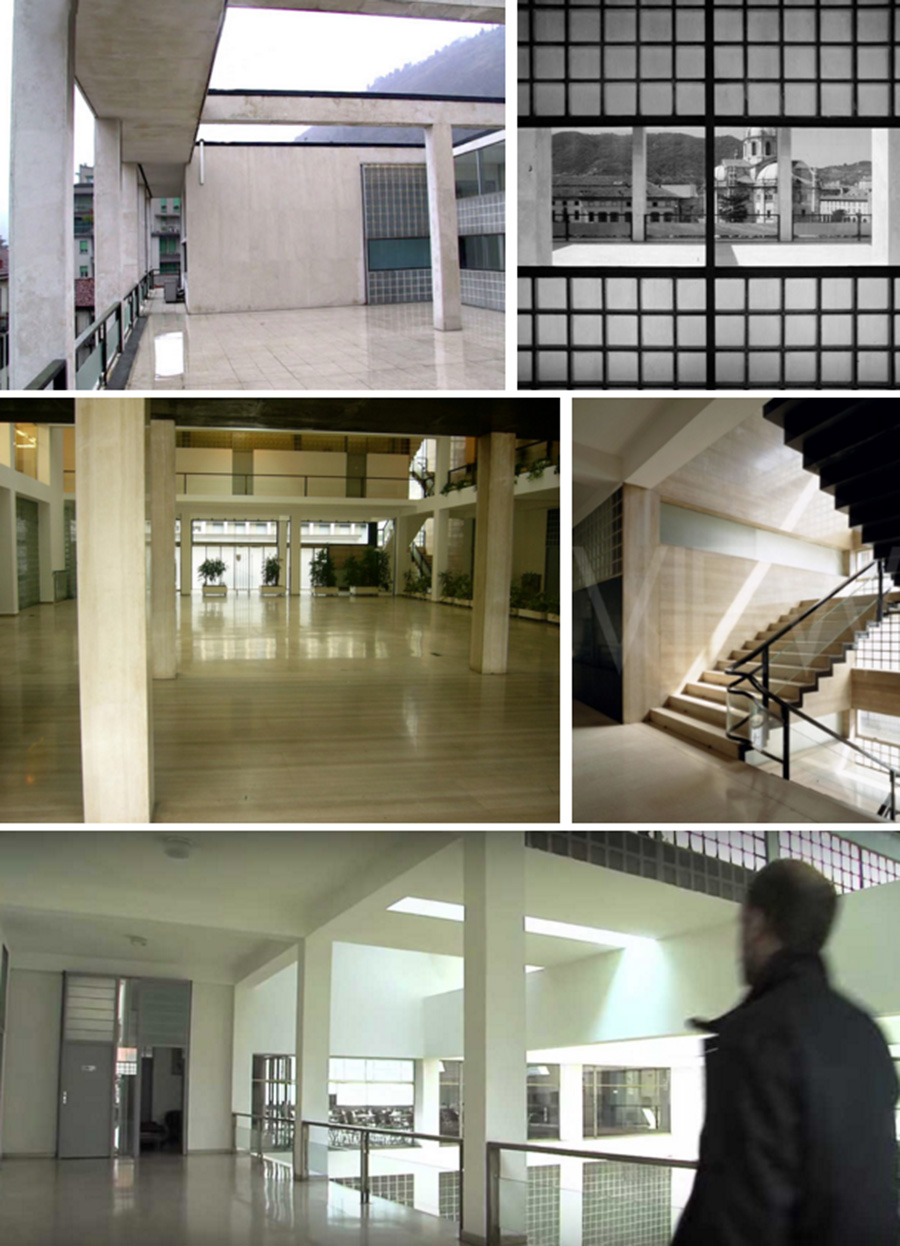 Como exhibits with a stark ‘rationalist’ clarity certain fundamental properties that are requisite to any architecture: some manifest care for the site and its surroundings and an indelible certitude about the direction of North and the seasonal arcs of the sun; a readiness to explore the human purposes of the program and to visualize the spaces and spatial relationships that support and enhance them; a capacity to compose, order and detail the project so that structure and enclosure, opacity and transparency, materials and light come together in mutually supportive and coherent ways that are sometimes even compelling.