A modest city hall in a small capital city, a building reveling in its unique site and its national history.

Reykjavik, the capital of Iceland, has a population of 120,000. It can be linked with Saynatsalo in Finland, and also with Tromsø and Bodø in Norway, and Kiruna in Sweden, all small towns close to the Arctic Circle which have taken pains over the design of their new city hall buildings in the recent past, and all of which can be favorably compared to another very much larger ‘winter city,’ Anchorage, Alaska, which, to its shame, did not. 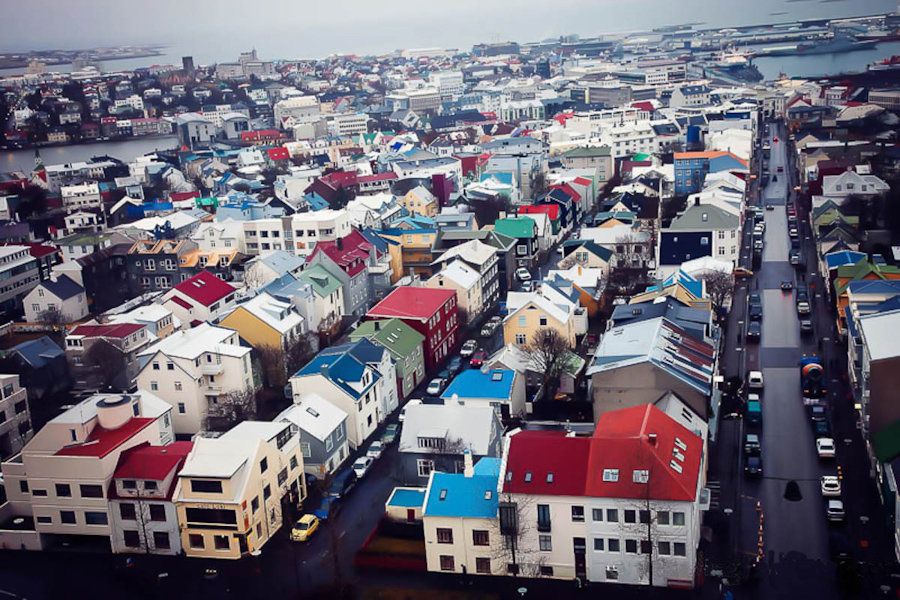 Reykjavik receives more than its fair share of snow and ice -- it had fully two storeys of piled up snow in the Austurvöllur, the city’s main square, on one occasion when I was there in the grudging two-hour, fog- laden half-light of mid-winter 1973 -- but it is really a city of rain and damp, mold and moss, 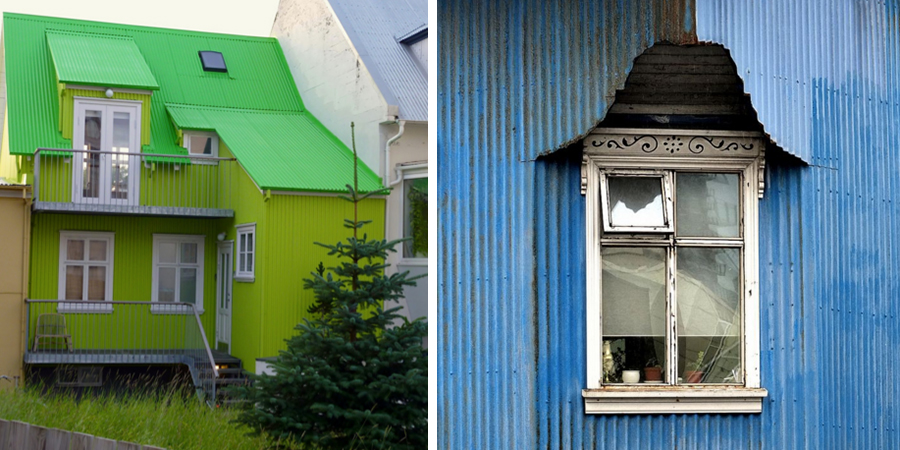 and since about 1960 it has been the cheerfully multi-colored city of corrugated iron cladding.

The brilliant sunshine of a crisp mid-summer day hugely augments Reykjavik’s bright pigments. City Hall can be seen in the middle ground of this photo, occupying its privileged site on the northeast corner of the Tjörnin (the Pond) in the center of the city, the ‘giant order’ of the west building’s colonnade reflected in its waters. 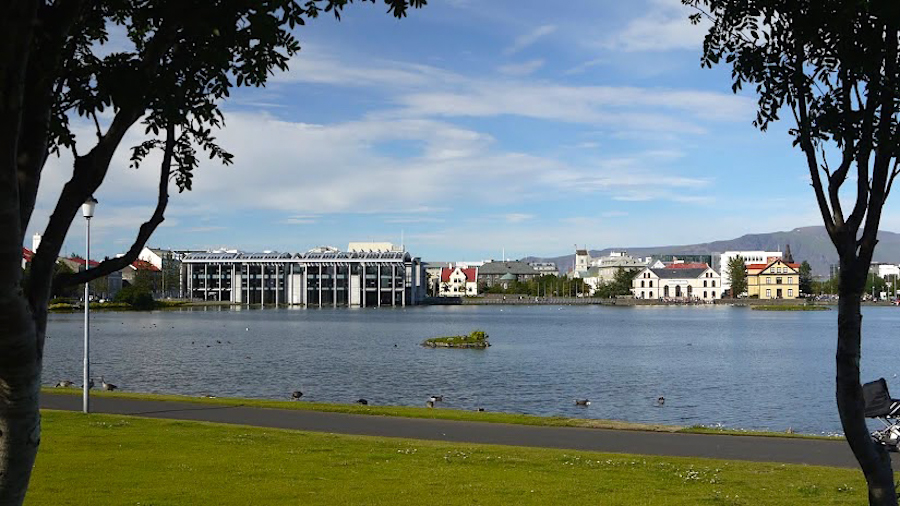 The design for City Hall was commissioned after an international competition identified the local firm of Studio Granda, Architects. 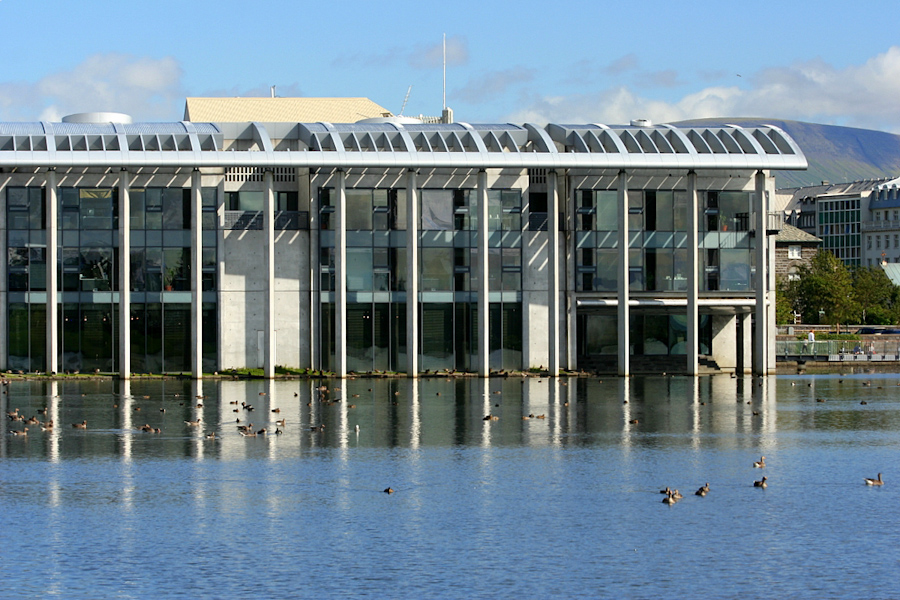 The west building colonnade. The building is situated half in and half out of the water and is designed to be welcoming to some forty or fifty species of waterfowl, some of them bred by local enthusiasts on the farther shores of the Tjörnin, to draw them closer to the downtown.

The building houses the offices of the mayor, council and administration of Reykjavík. On the ground floor and open daily to the public are the information desk; the Öndin Kaffihus, or Duck Café, with internet access and a panoramic view of the Tjörnin; and a much consulted and applauded 850 square foot topographical model of Iceland which is a permanent feature in a gallery hosting a variety of changing domestic and international exhibitions. The ground floor also incorporates a stretch of the ‘City Walk Reykjavik’ walking tour whose route along the north shore of the Tjörnin bends into the west building of City Hall and exits at its south end, affording the participants a closer experience of the Pond on a pedestrian bridge leading to the Theatre Idno. There is also a generous lecture-cum-conference room.

The entry from the Tjarnargata (Pond Street) into the west building. 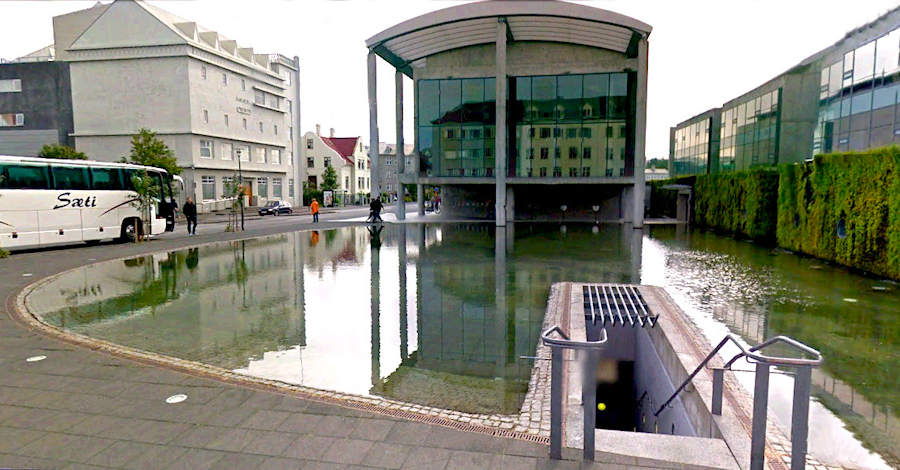 A view of the Vorstreeti (Spring Street) entrance beneath the Council Chamber in the east building. 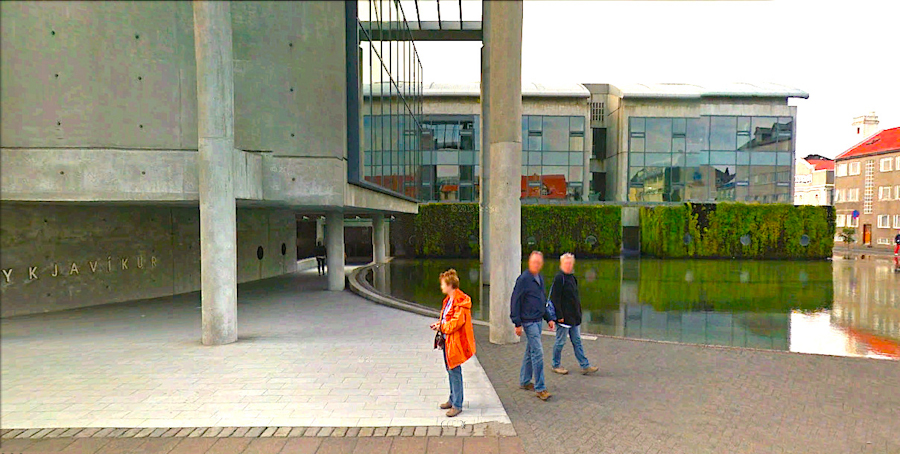 The main entrance on Vonarstreeti. There are flagpoles on the corner which all of these photos manage to miss. 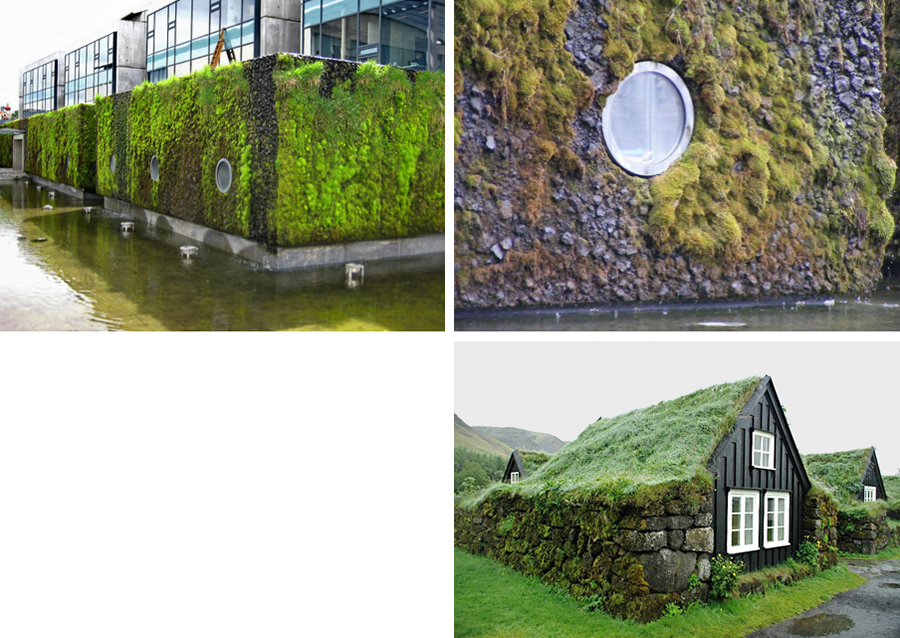 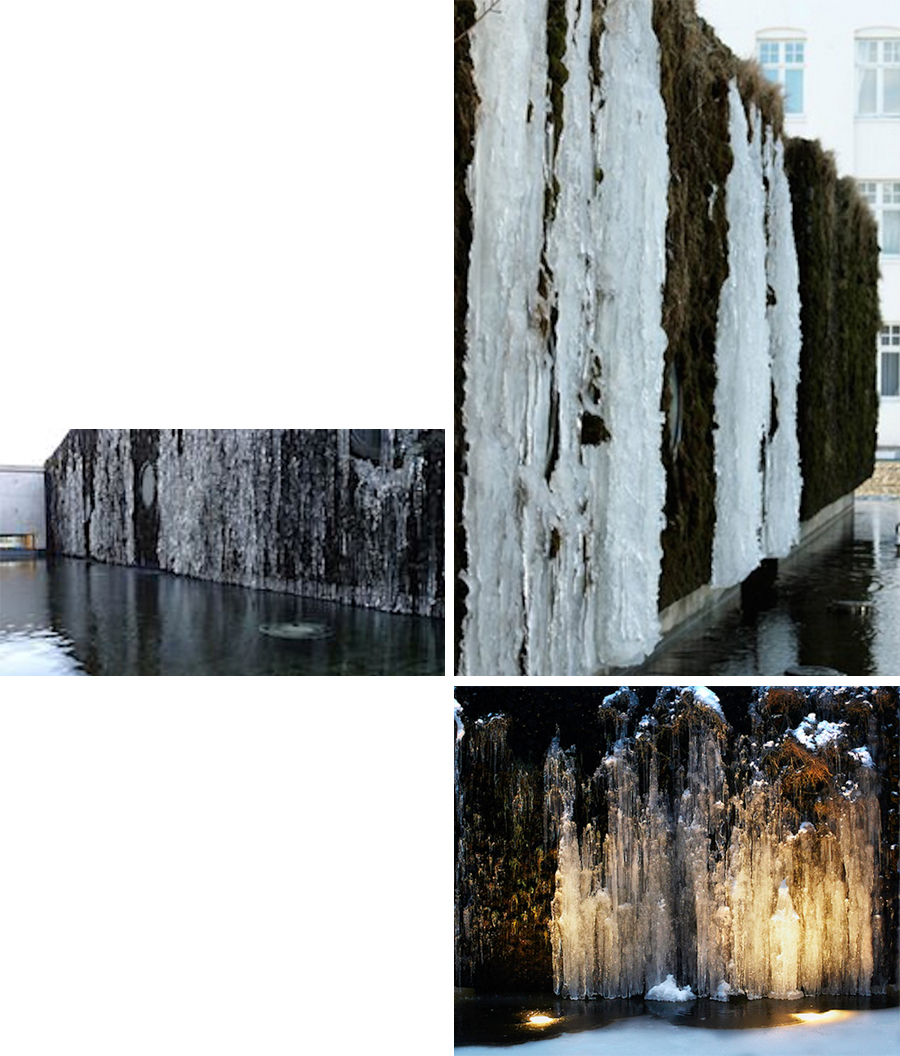 Strongly evoking Iceland’s vernacular heritage, the long line of single storey attachments to the articulated secondary facade of the west building replicates the form of the thick, stone-encased peat insulation walls which embraced three sides of the traditional fisherman’s cottage and, with a crude aggregate of black igneous rock exposed in the concrete, creates a surface calculated to retain moisture and foster the growth of Iceland’s ubiquitous moss. Then, taking advantage of their location in a pond, these attachments invite delight in the changing poetry of their cyclical freeze and thaw accumulations of ice stalactites. 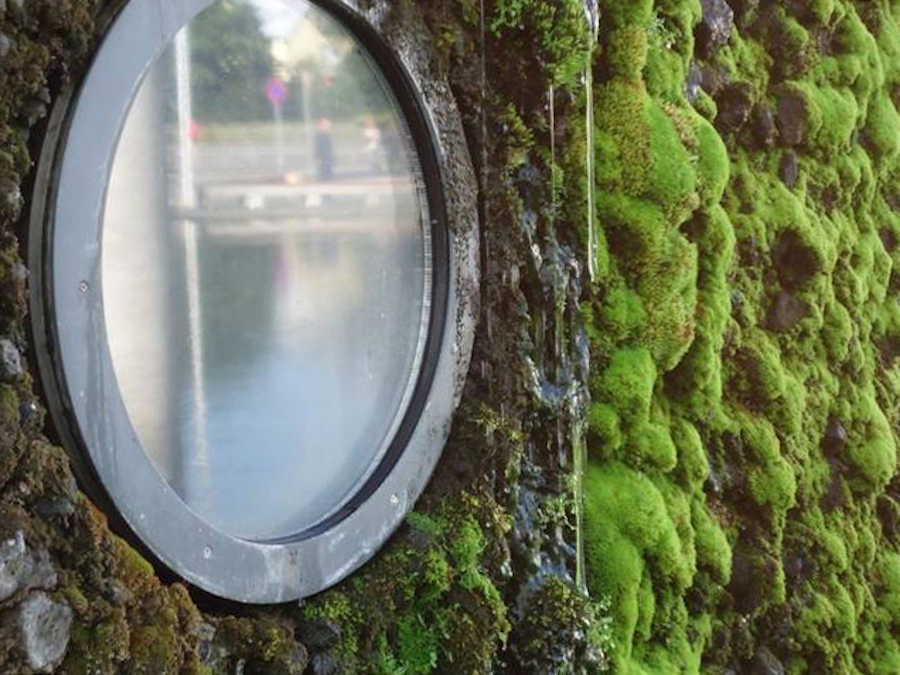 But what are we to make of the portholes?

They were clearly cribbed from the work of James Stirling, who first used oversized portholes as structurally logical openings in in the precast concrete assemblies that mark the staircases on the ‘promenade deck’ of his St. Andrews University Dormitories project of 1964-67 -- a project on the east coast of Scotland confronting the North Sea with with undeniably nautical imagery -- and systematically thereafter in precast unit assemblies such as those in his Runcorn New Town Low Cost Housing project of 1967-76. 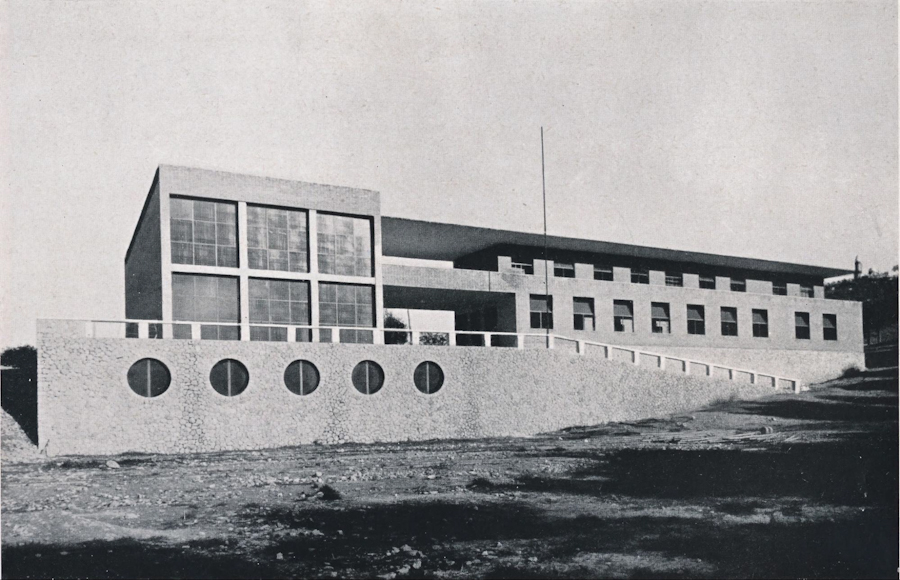 Prior to Stirling, Agnoldomenico Pica had employed oversized portholes in his Italian Fascist Youth Lodge at Narni, in 1937-39.

And the source for both Pica and Stirling must have been Le Corbusier’s 1916 sketches for a seaside cliff top villa for the Paris coutourier, Paul Poiret. 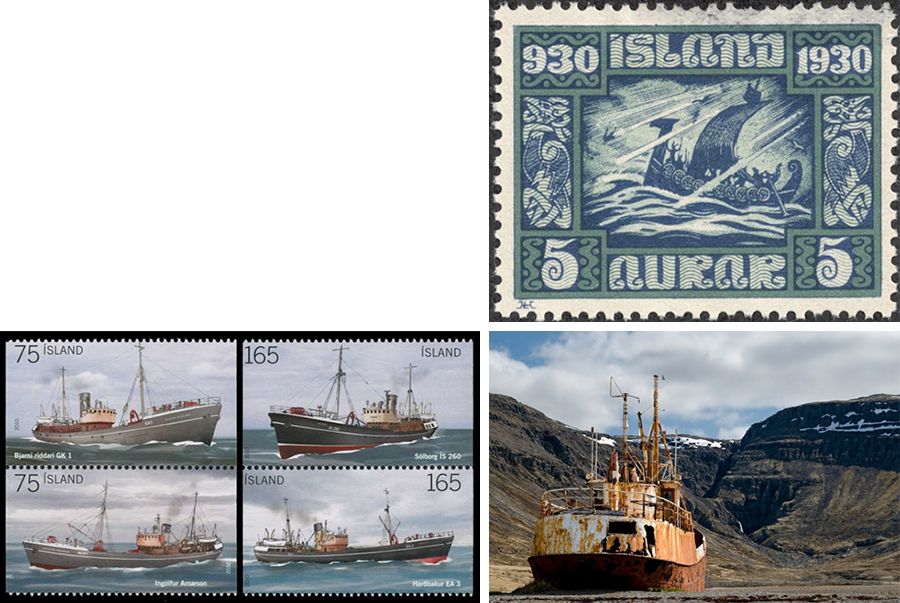 But even though Studio Granda’s moss covered walls may also be precast assemblies, which one would certainly expect them to be, this can scarcely be sole reason for their ‘porthole’ openings or, in a single storey structure to which skylight is available, for any wall openings at all. So the portholes had to be chosen for their inescapable nautical connotation to the people of Reykjavik. But do they simply serve to remind us of Iceland’s proud history of seafaring reaching back to the Vikings, or is their moss-shrouded condition also a lament for a fading fishing and mercantile past and for the rusting hulks on Iceland’s shores? 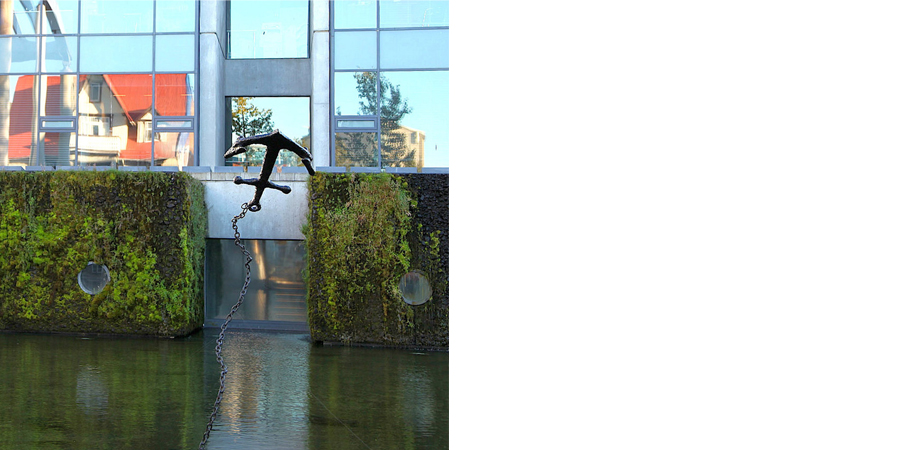 The airborne anchor is even more enigmatic. 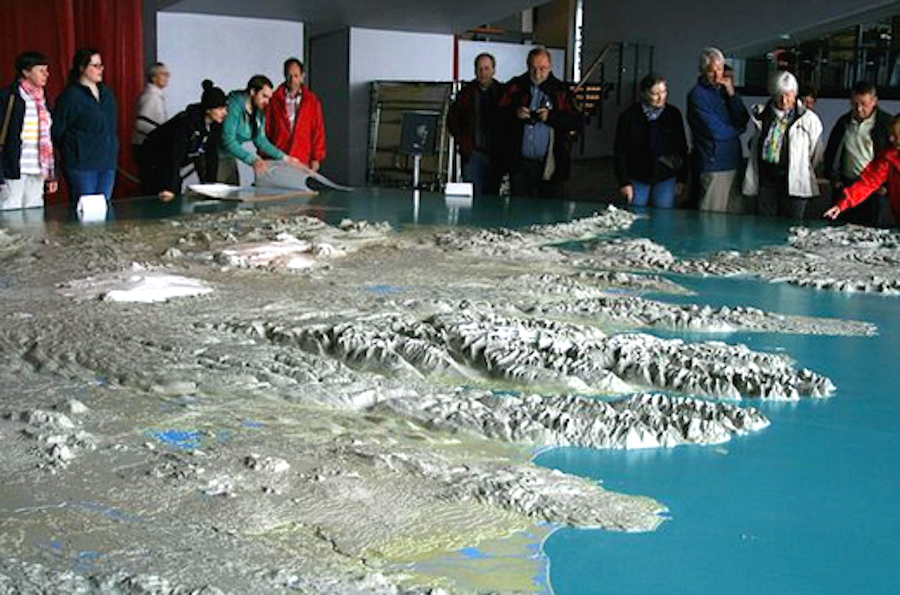 Inside there’s the topographical model seen by thousands of visitors a year. 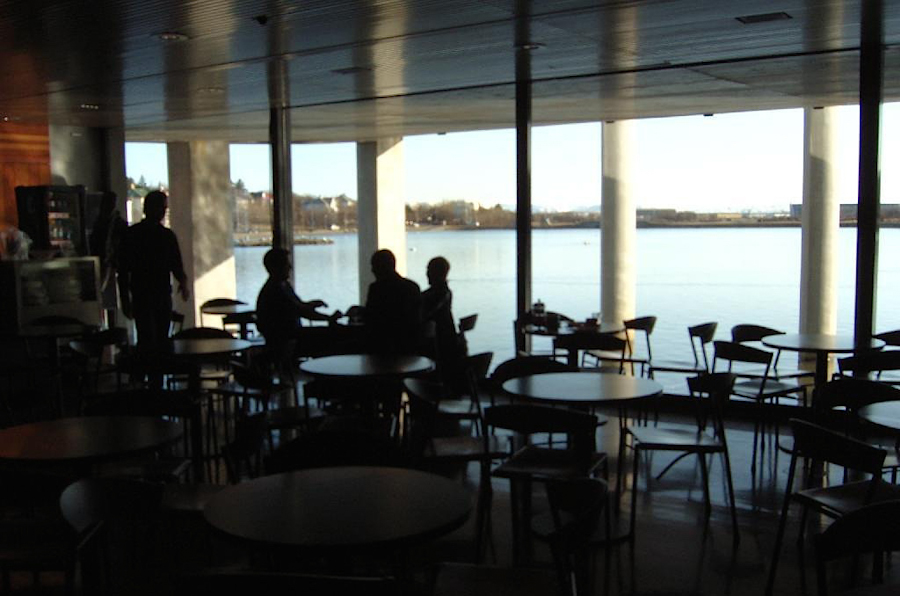 The Duck Cafe, where there is often a water bird on the window sill, mere inches from ones feet. 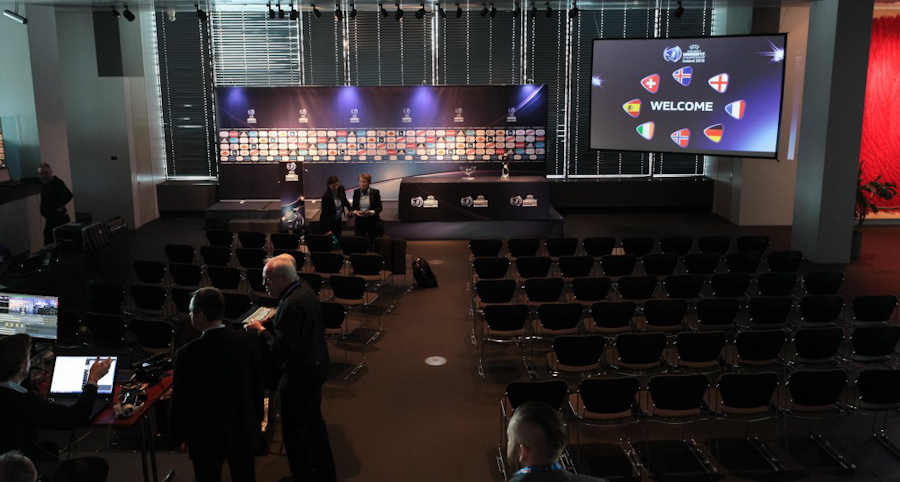 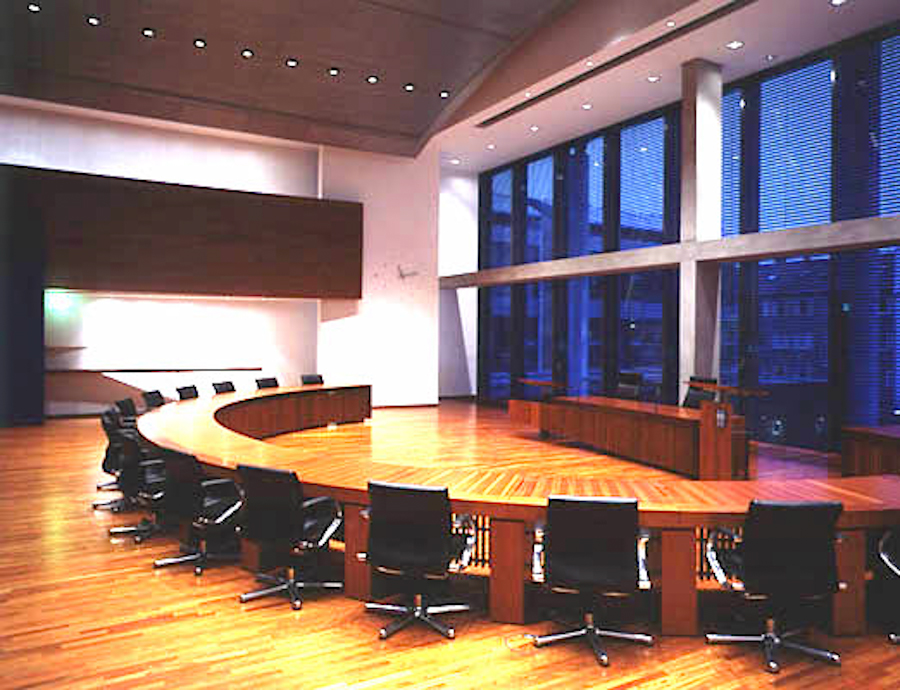 The Council Chamber. I haven’t been able to find any drawings for this building but the layout of its Council Chamber places the focus of attention exclusively on the mayor, which may be a Scandinavian tradition.

At the south end of City Hall is the pedestrian bridge to the Theatre Idno, and more flags. 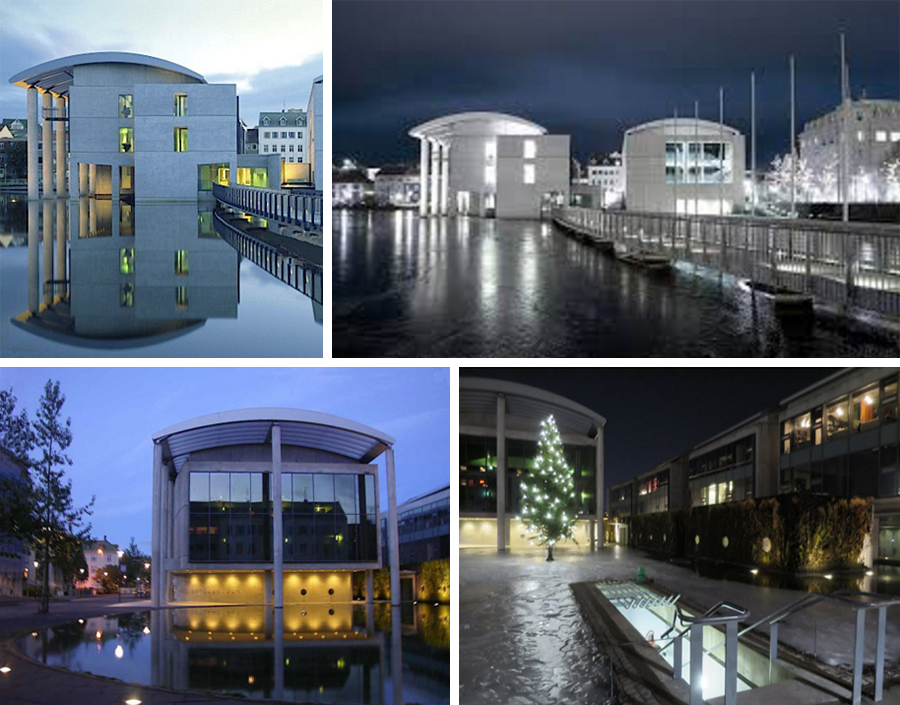 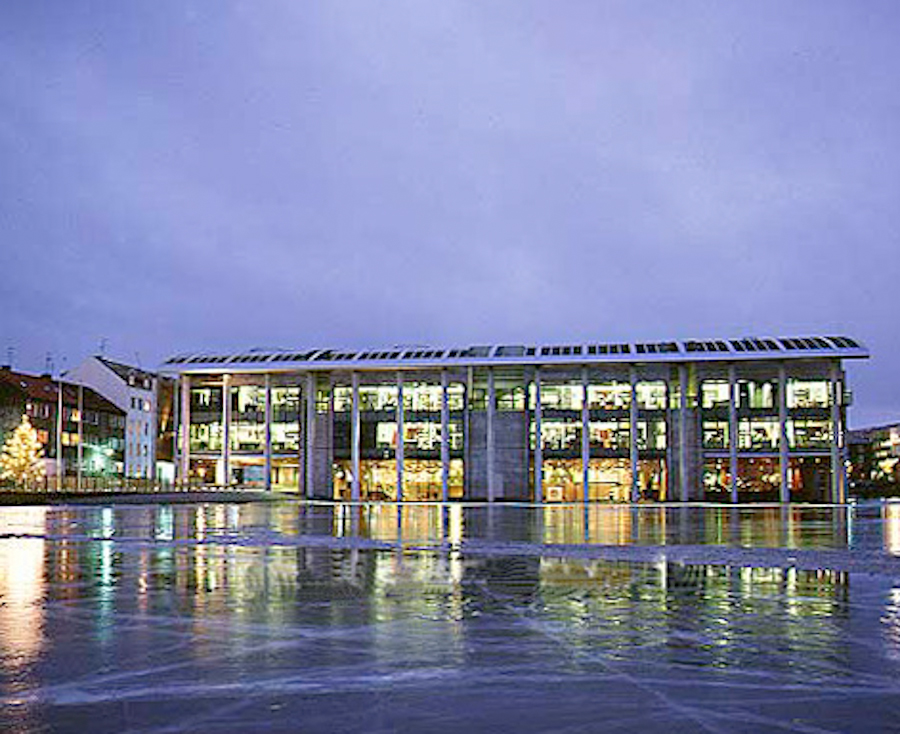 All the thoughtfully designed northern city halls of recent years have used the interior lighting necessitated by months of winter twilight and darkness to throw a little cheer into the immediate surroundings of the building. At Reykjavik, bounded by water and ice, the effect becomes magical.