The quintessential city hall with a splendid piazza, long seen as emblematic of a virtuous republic, it was immensely influential in the shaping of both city halls and federal buildings (courthouses and post offices etc.) in nineteenth century America, and is still producing distinct echoes in modern day Scandinavia and Canada, where several city halls have been built of late.

City halls have a pretty long history as a building type, and surely the quintessential city hall is Siena’s Palazzo Pubblico, begun in 1297 for the republican government of the city’s Podesta and Council of Nine, this at a time when the idea of operating one’s city as a republic required not merely the formidable natural defenses of a hill town but also some sustained conviction and fortitude. Within its walls, the splendid Council Chamber bears Ambrogio Lorenzetti’s allegorical frescoes on Good and Bad Government, while outside the walls the building is the focal point of the majestically simple shallow half saucer of the Piazza del Campo, the brick-paved open air living room of the city which is also the venue for Siena’s famous Palio horse races, which have been run in July and August each year since medieval times. 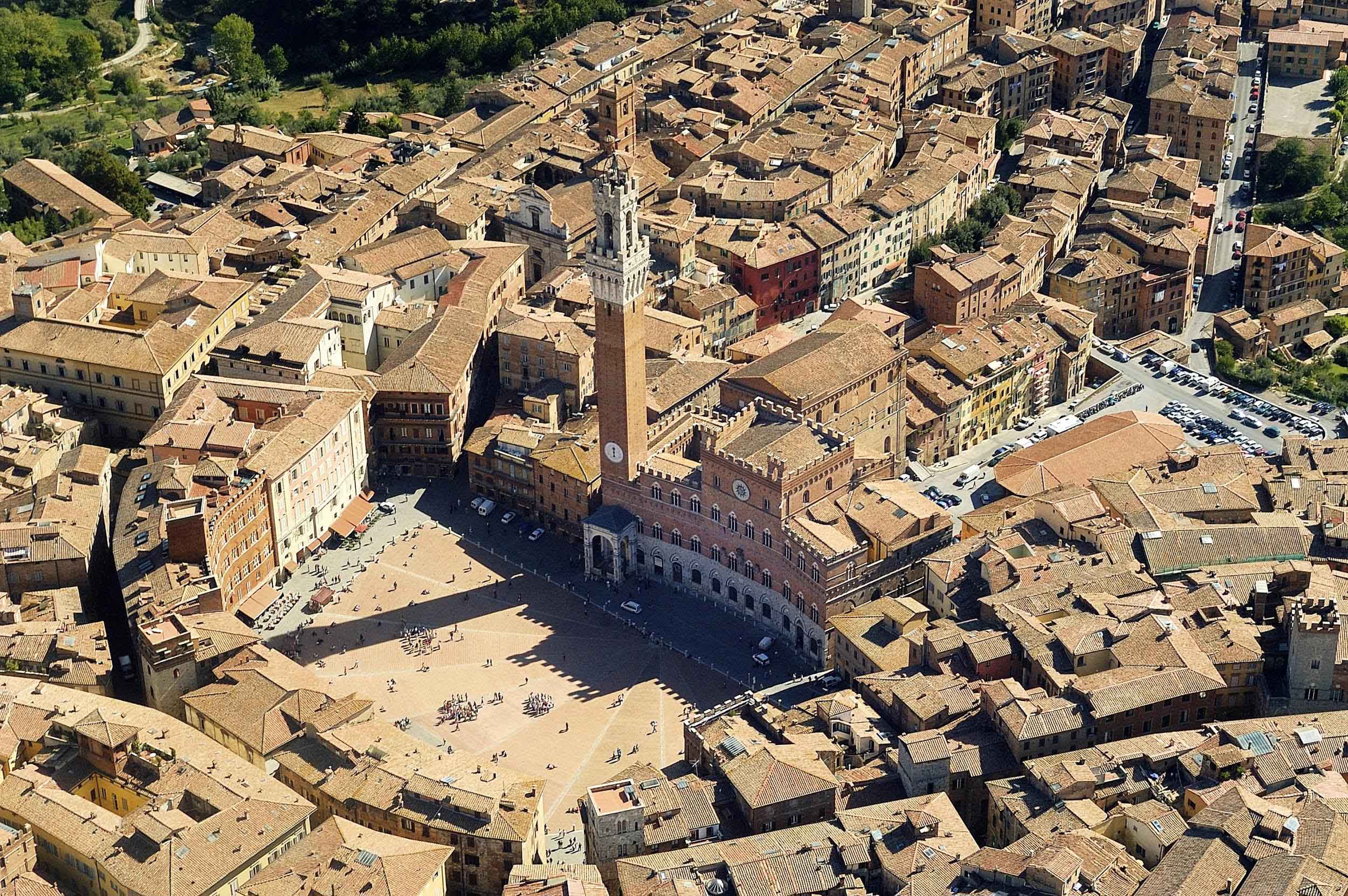 The Palazzo Pubblico and the Piazza del Campo seen from the northwest, the morning shadow of the palazzo’s Torre del Mangia sweeping like the gnomon of a sundial across the gores of brick paving sloping down toward the entry loggia at its base. 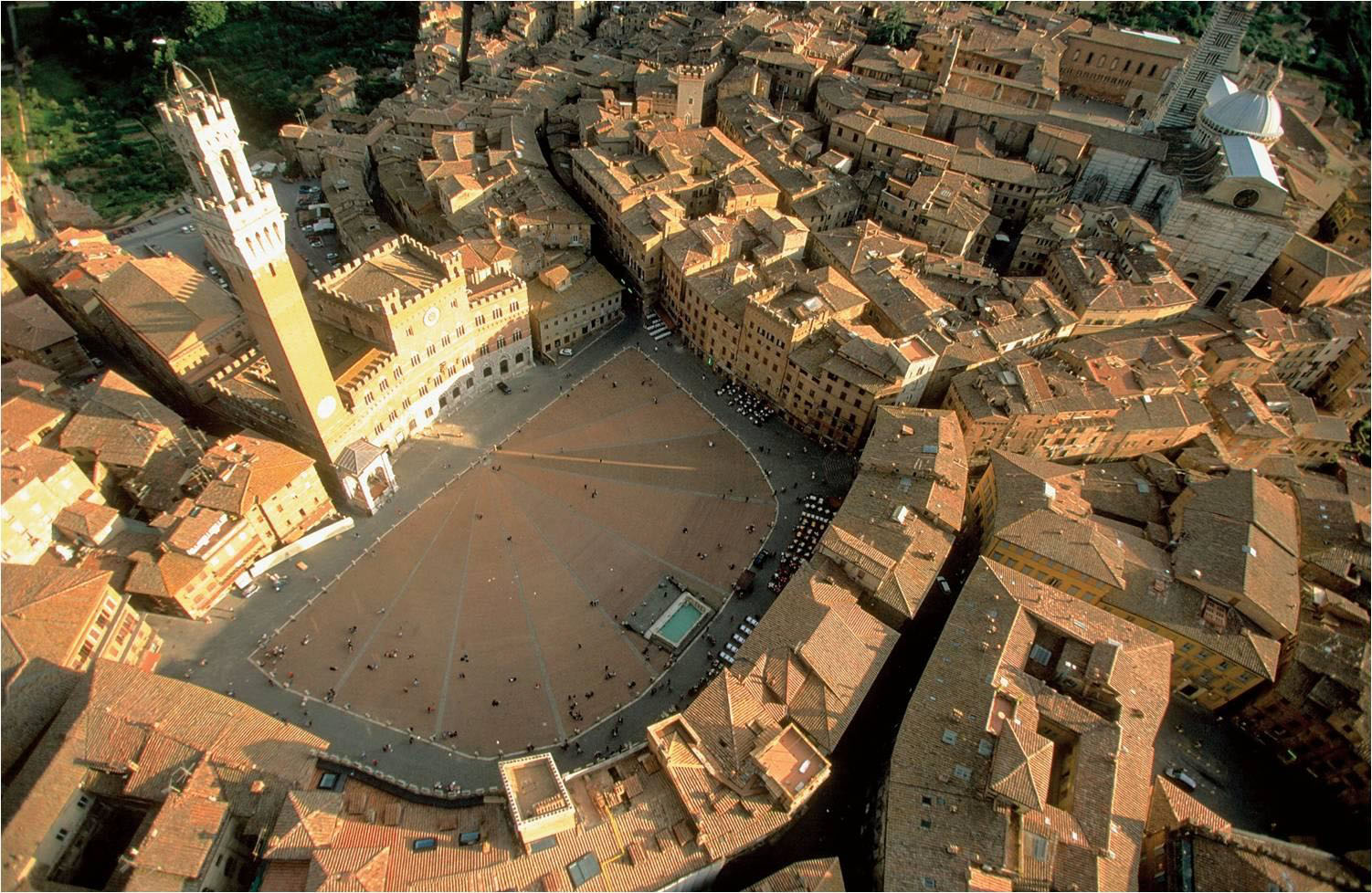 The Palazzo infusing the Campo with reflected light in the evening. 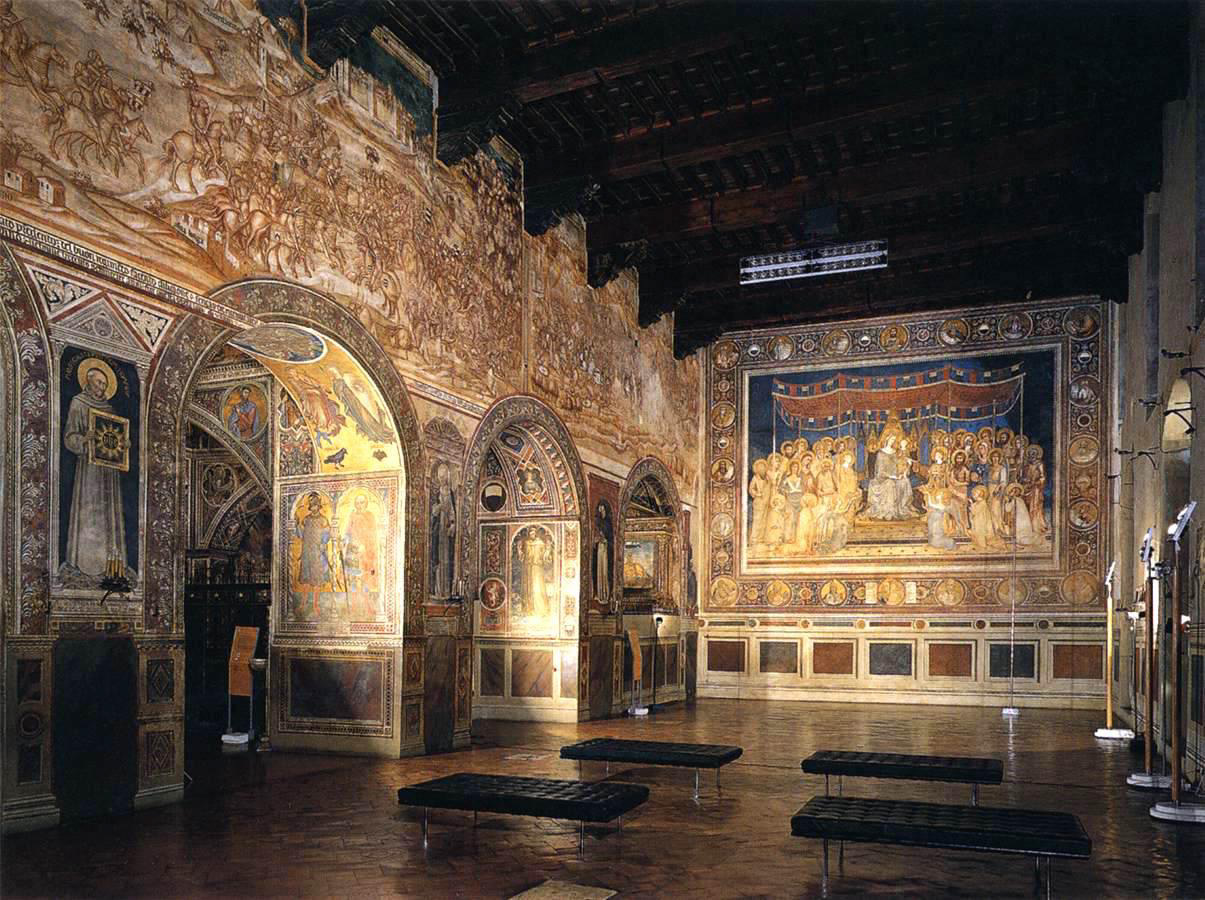 The Sala dei Nove (Hall of Nine or Council Room). 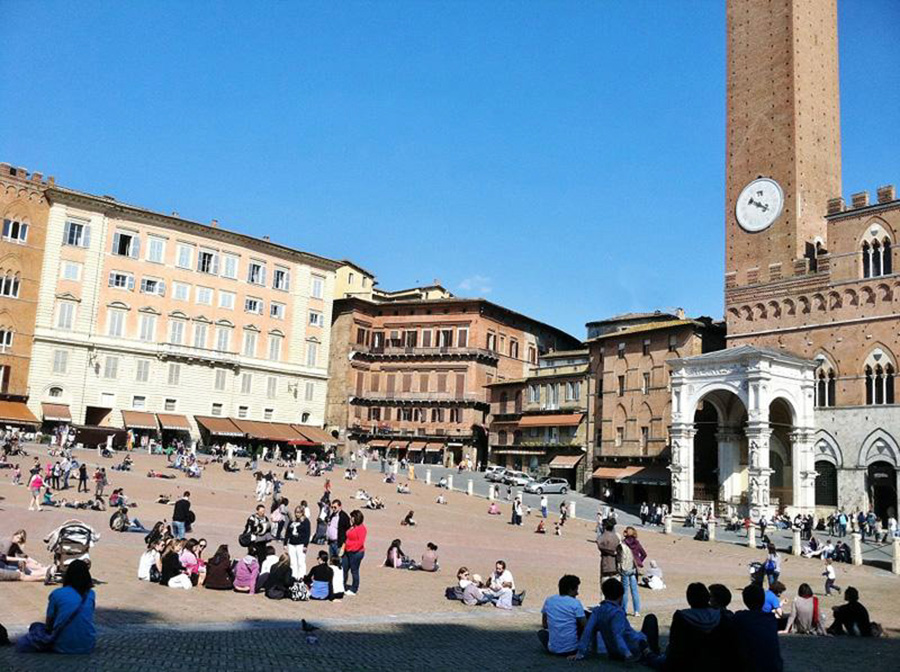 Siena receives 165,000 foreign tourists each year but, curiously, in this Campo all of these people are glad to be its citizens. 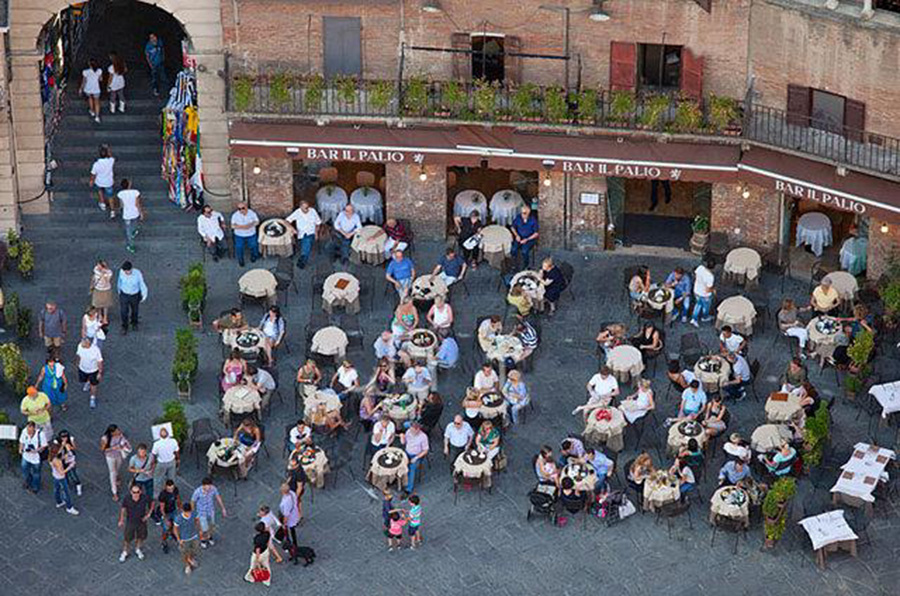 Dining out at the Bar il Palio, one of a string of such establishments on the upper perimeter of the Campo, which was a mixed use development centuries before the planners and zoners were obliged to to reinvent it. 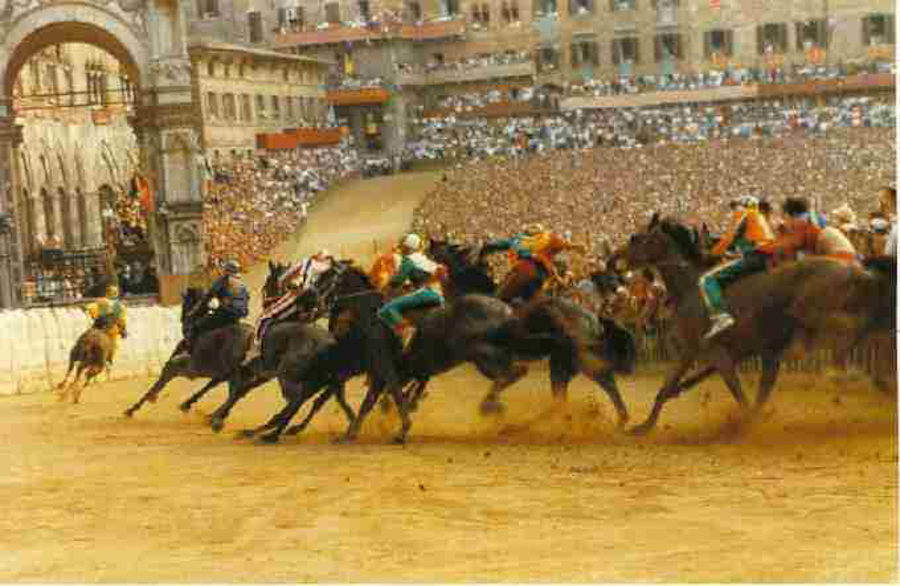 The Palio seen rounding the southeastern corner of the Piazza del Campo into the Palazzo Pubblico straight. The word, ‘campo’ carries the meanings of both ‘field’ and ‘course’, here denoting a centuries old prototype for Newmarket, Deauville and Keeneland. Why, I wonder, is not Siena a Lexington Sister City? 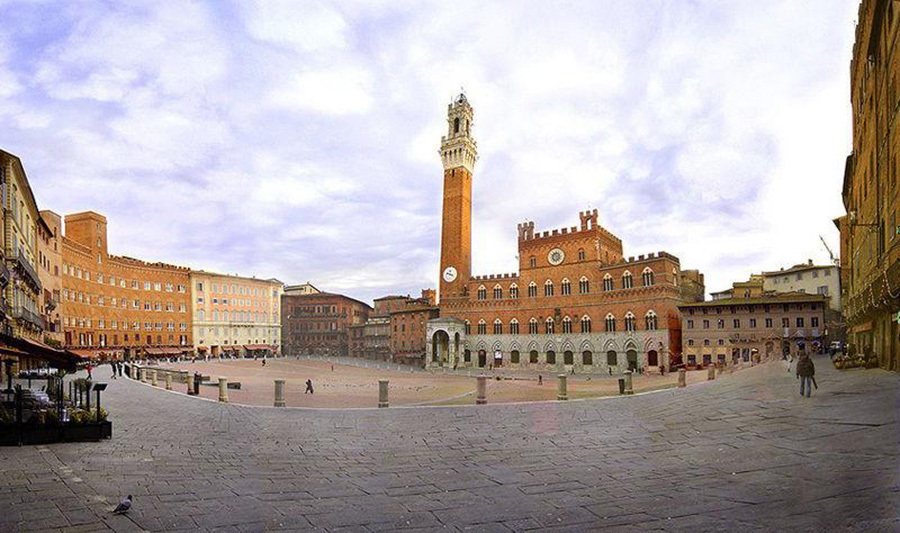 The Palazzo’s massing -- a subtle negotiation between symmetry and asymmetry -- has been echoed in many subsequent city halls, including those of neighboring Louisville and Cincinnati