An unpretentious building with a U-shaped plan embracing a glazed atrium on a sloping site, its lower streetside accommodating a cinema complex and its interior lighting offering wintertime cheer to the town green it shares with the original town hall.

Tromsø is a town of 72,000 hardy people located in the Norwegian fiords about twenty miles inland from the North Sea and 220 miles north of the Arctic Circle. 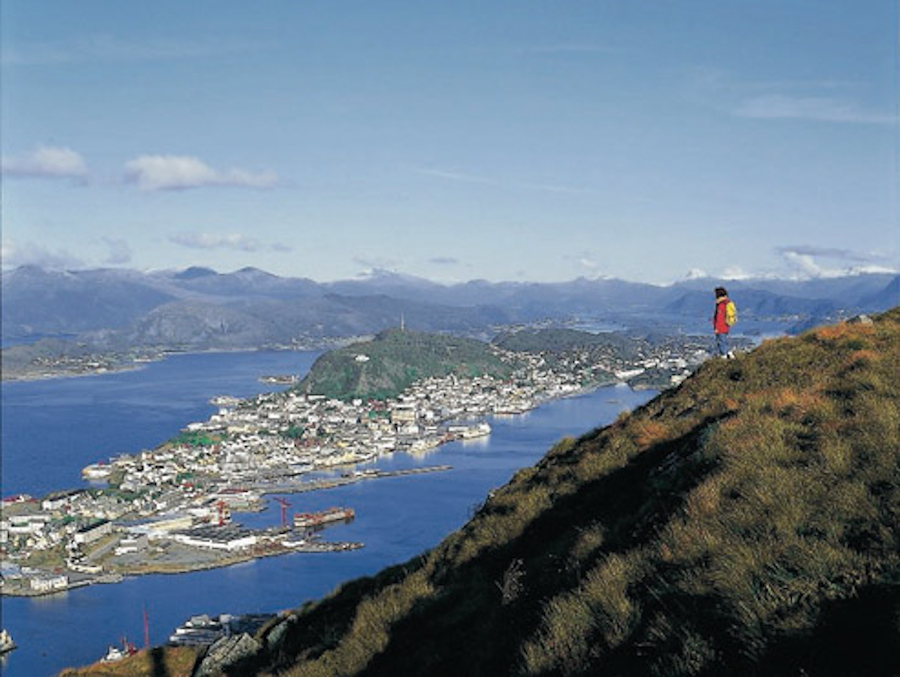 This is the civic center of Tromsø, climbing the slope from the harbor and the Market Square to the tilted Town Green with its statue of King Haakon VII, its bandstand and the former Town Hall at its head, looking back down to the water. Framing the south side of the green is the new Town Hall with its large glazed atrium. Behind it, with the shiny metallic roof is the new city library which appears to have been built as a coordinated project with the new town hall. 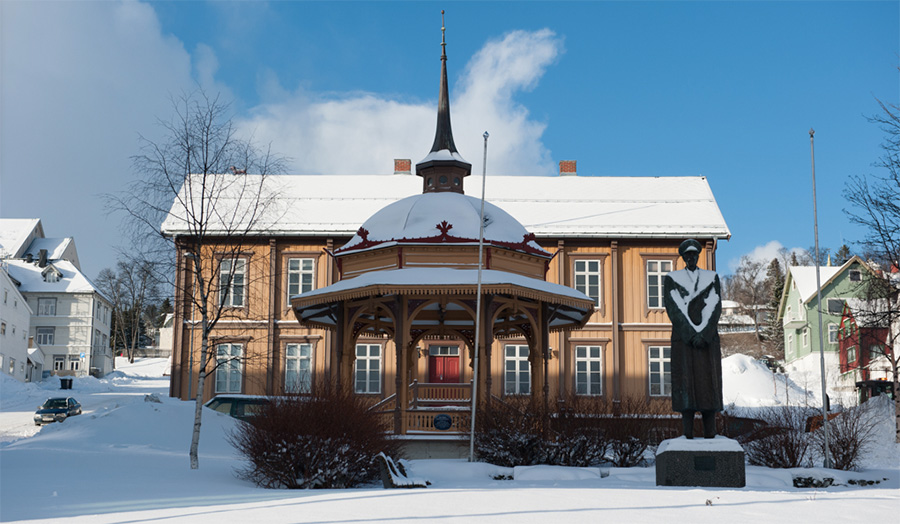 The former Town Hall seen through the bandstand on the Green, which is now shared with the new Town Hall, off to the left of the present photo King Haakon VII (1872-1957), whose monument is in the foreground, was much revered for his resistance to the German occupation of Norway during the Second World War.

Views of the new Town Hall on the Green. Note that the sloping grade produces a tall lower storey on the east side of the building, which happens to front on a commercial street.

Looking from the Town Green to the harbor.

The view from the harbor edge of the Market Square, with the former Town Hall closing the vista three blocks to the west and the new Town Hall just below it and to the left. 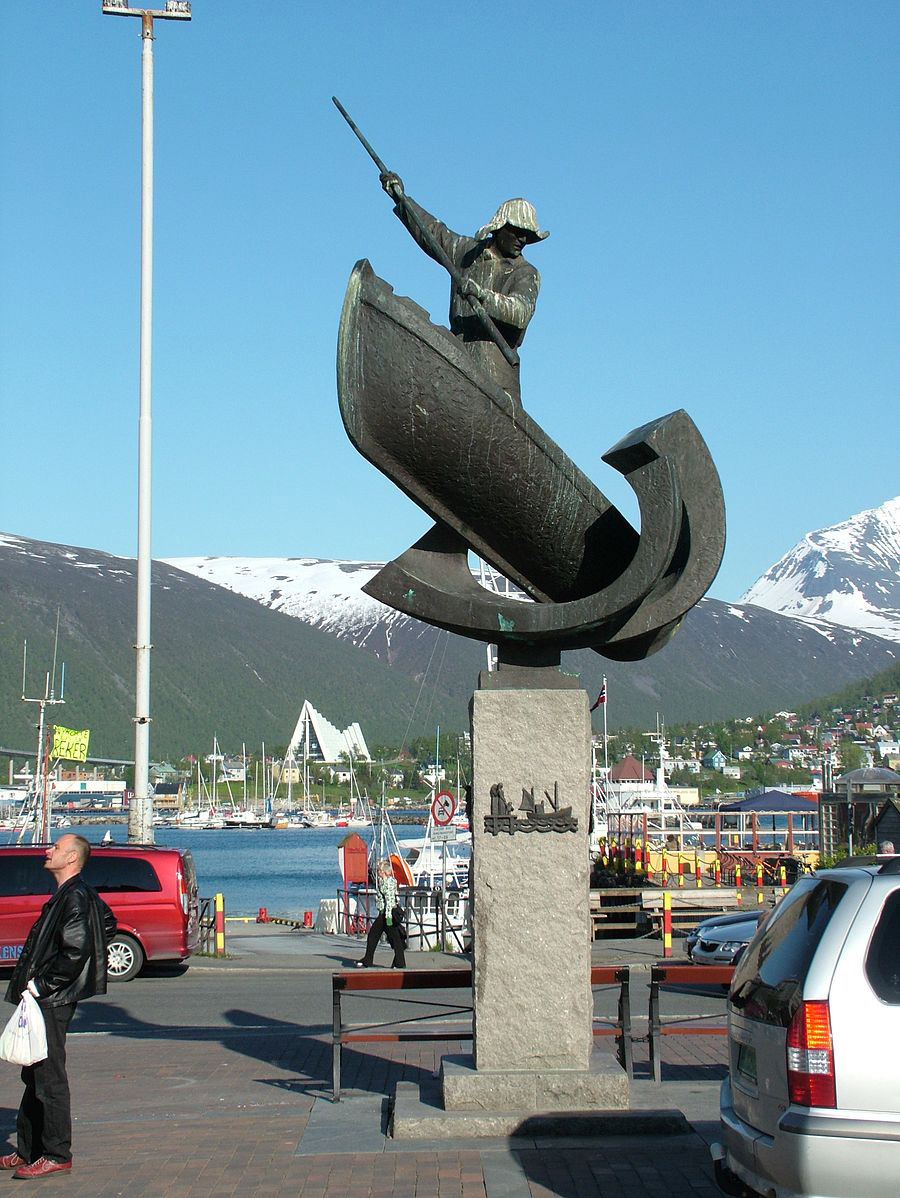 The harbor and the fiord beyond seen from the monument to the Arctic Hunter on the eastern edge of the Market Square. Norwegians have been hunting Minke whales off the shores of Tromsø for a thousand years. 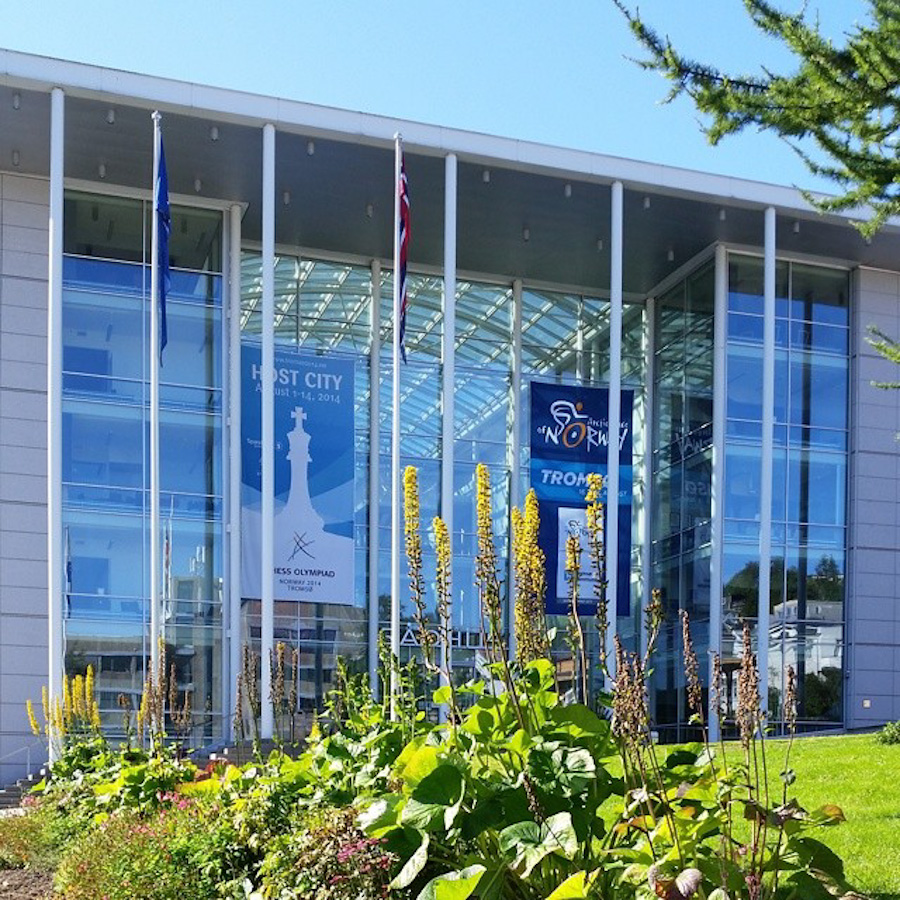 A closer view of the Town Hall front, which immediately reveals its plan: a five storey ‘U’ of municipal offices surrounding a generous glazed atrium that fills out the city block. It was clearly built on a modest budget but it conveys a sense of unpretentious accomplishment and well-being nevertheless. 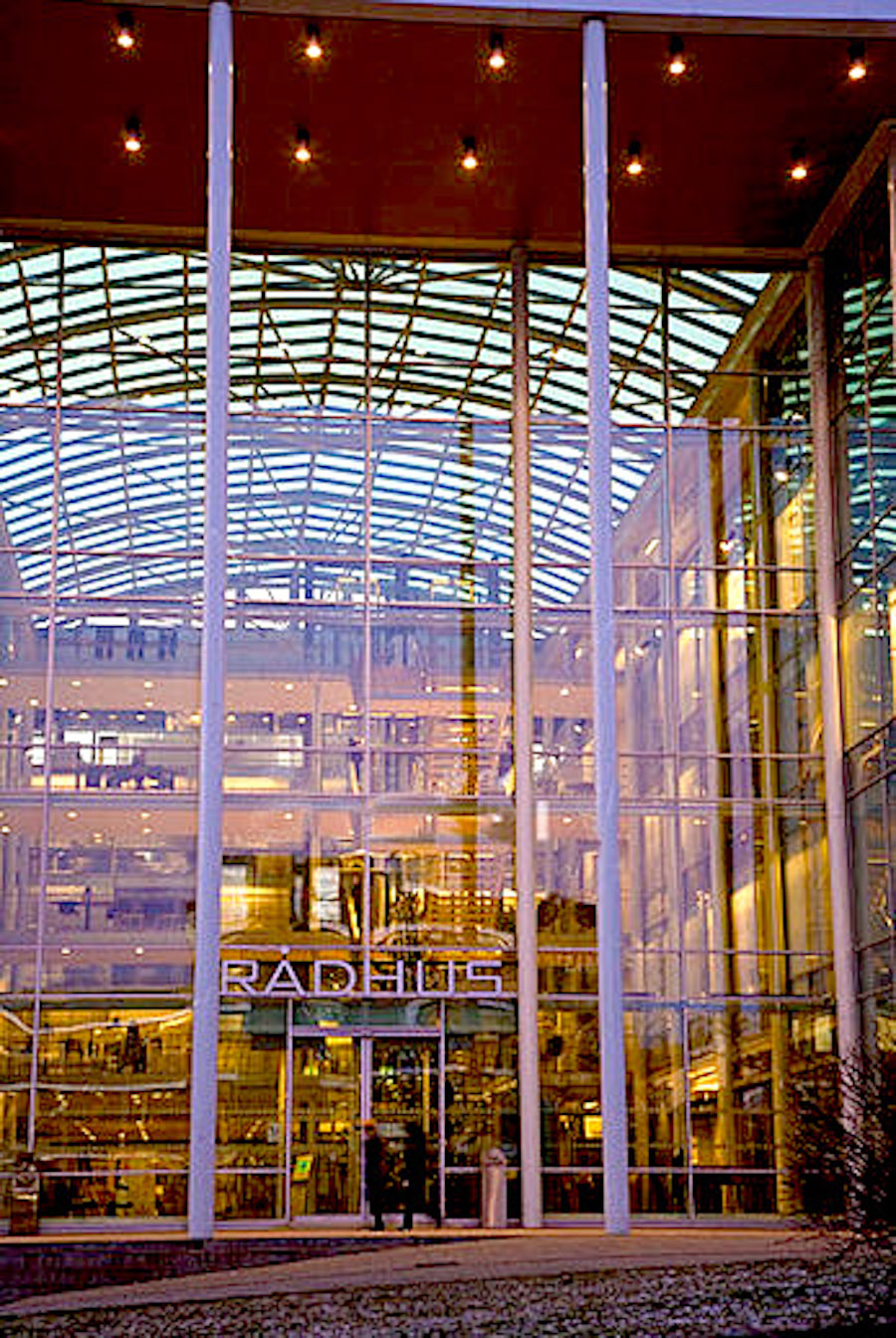 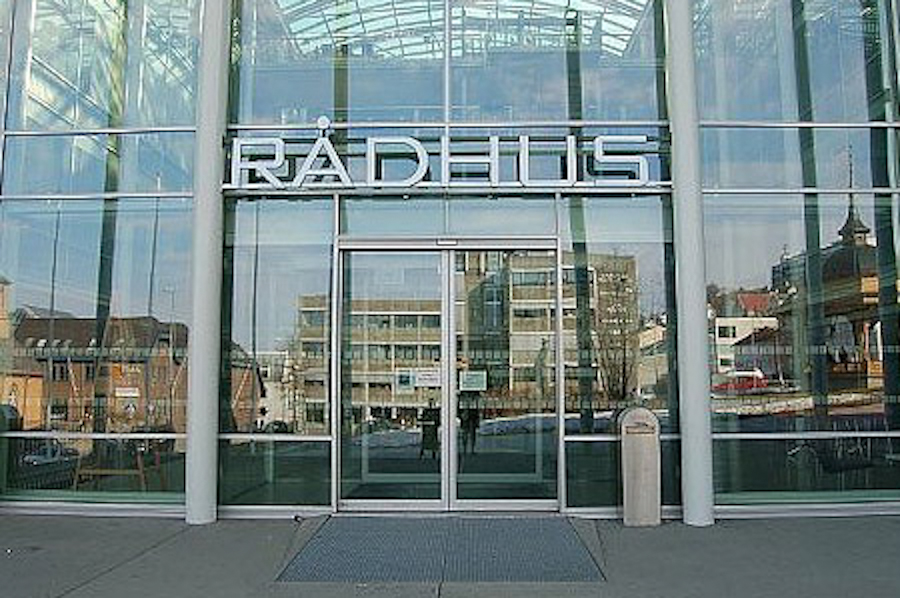 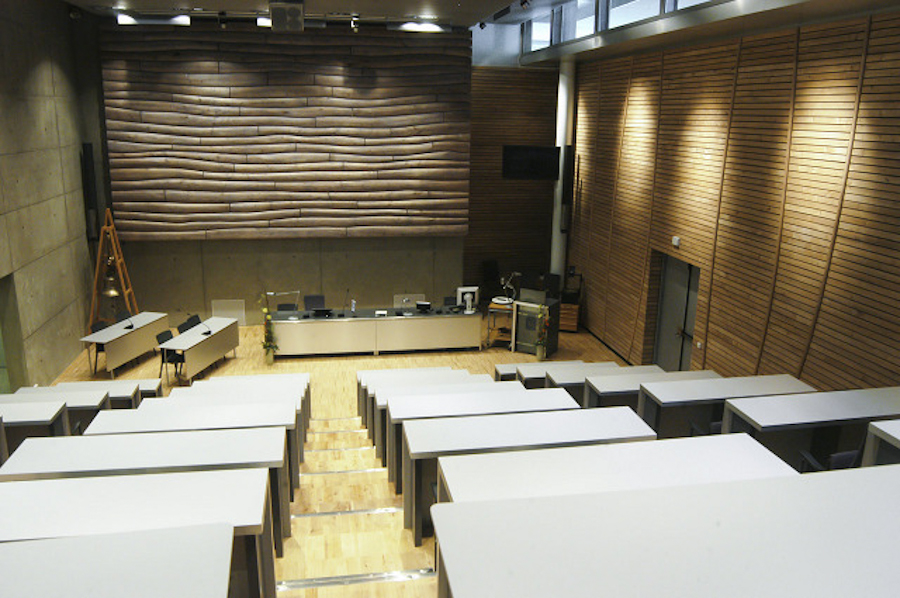 This is the only photograph I can find of what I take to be a largely subterranean Council Chamber, curiously rustic and ill-furnished and simultaneously chilly.

A University of Tromsø acapella group performing in the atrium. 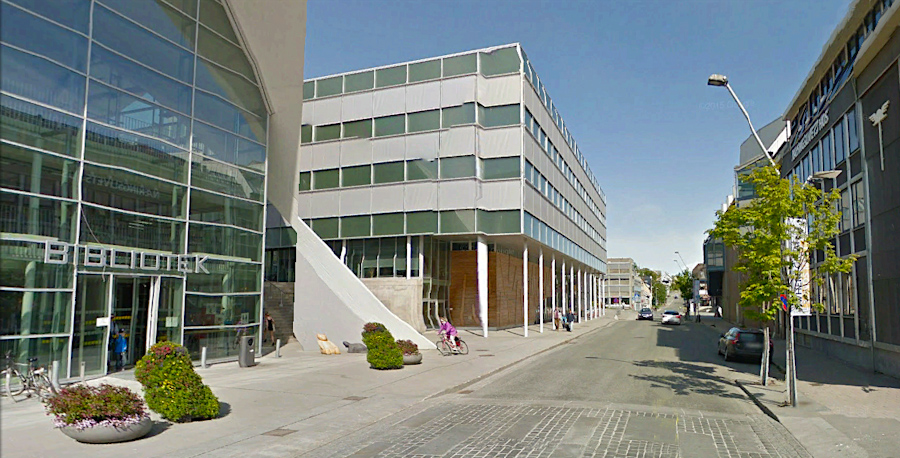 A view from the new city Library to the tall Grønnegata colonnade of the Town Hall and the Aurora kino Fokus cinemas that occupy its commercial frontage.

The Aurora cinema complex is the venue for Tromsø’s mid-winter International Film Festival, held every January. It contains six theaters with a total of 936 seats offering a degree of comfort that was clearly not contemplated in the Council Chamber. A luxury theatre has leather seats with, small tables and connection to a bar, while those on the street outside take cheer from the building’s illumination.