A large and carefully considered city hall, well suited to its sloping site and its multiple purposes.

While it took lessons from the recently completed Mississauga Civic Centre it is not a postmodern building, nor is it overtly eclectic, being more relaxed about such things as symmetry, axiality and so on. 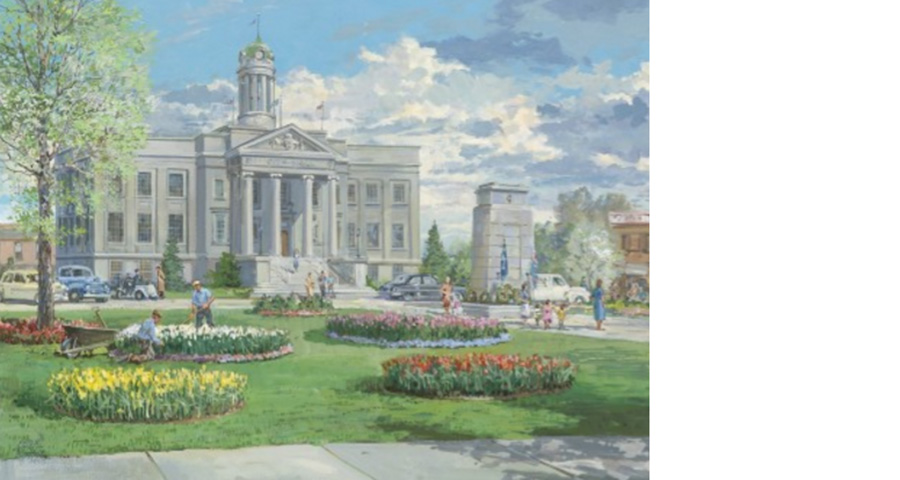 Kitchener is presently a city of 220,000 people. This is the last of its former city halls, built in 1924 and demolished in 1973. Municipal affairs were conducted in leased space for the next twenty years, but in the late 1980s, during the mayoral term of Dom Cardillo the city decided that it should operate from a dedicated, modern building again. It purchased a complete block in Kitcher’s downtown, bounded by King, College, Duke, and Young streets, and held a competition for the design of the building in 1989.

It was a two-stage invitational competition for a building of 212,000 square feet, with eleven participants in the first stage and five in the second. The initial project cost was $32 million CDN. 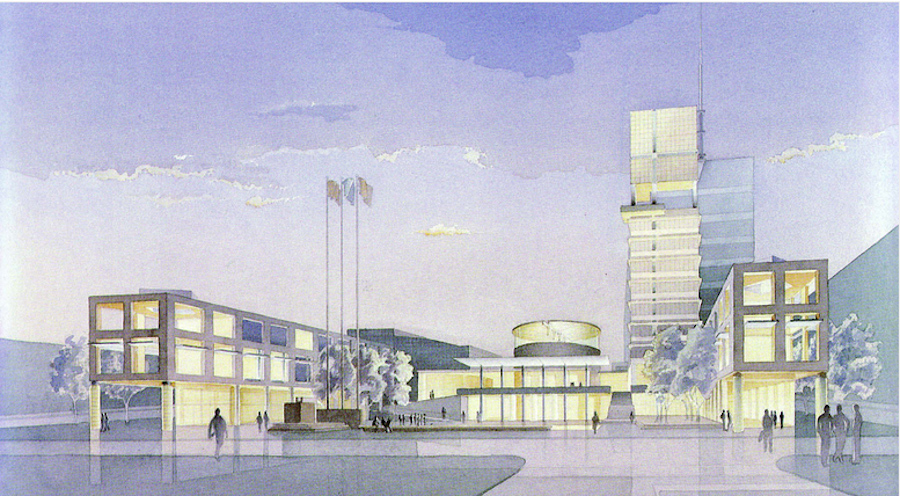 The competition was won by the Toronto firm of Kuwabara, Payne, McKenna, Blumberg, Architects, an exceptionally talented and intelligent partnership whose members have also been either long-serving members of the adjunct faculty or returning visiting critics in the School of Architecture at the University of Toronto.

Bruce Kuwabara was the partner in charge and found the purposes and aspirations of the project to be similar to that of those of his 1971-72 design thesis proposal. ‘The goals were to revitalize the city's main downtown street by providing a new focal point and heart for the community. In addition, this would reinforce the urban character of the downtown, its economy and public life, and help encourage the development of high quality design in the downtown.’ 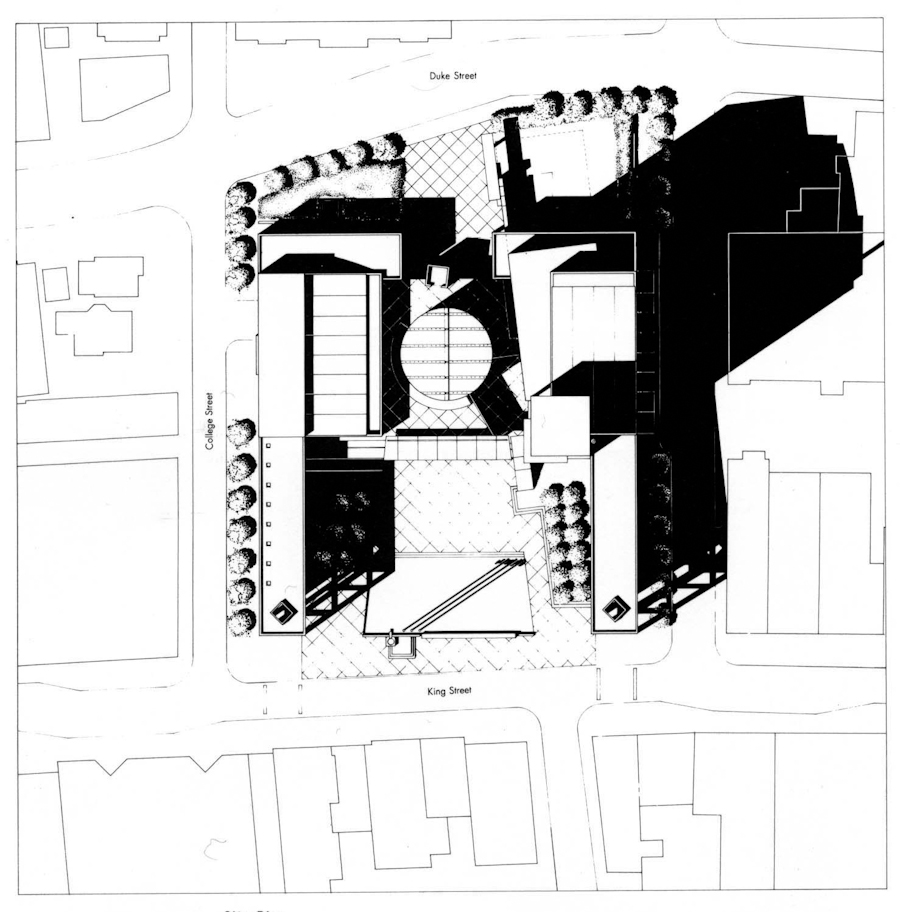 The site climbs the equivalent of one full floor level from King Street, the city’s main street on its southern boundary to Duke Street on the north. The principal formal element is the inverted U-shape, or more properly the paired inverted L-shapes, of the publicly accessible municipal offices – two storeys high at Duke Street and elevated to three storeys at King – which defines three street edges and embrace the City Hall and its Square. The major functions of the building are accommodated within three principal volumes: the Council Chamber in the rectangle to the upper left in the site plan; the Civic Rotunda in the center; and the Administrative Office Tower casting the long shadow on the right. The tower’s spire is an illuminated weather beacon visible to all parts of the downtown. Note the unlabeled Gaukel Street terminating at King from the south. 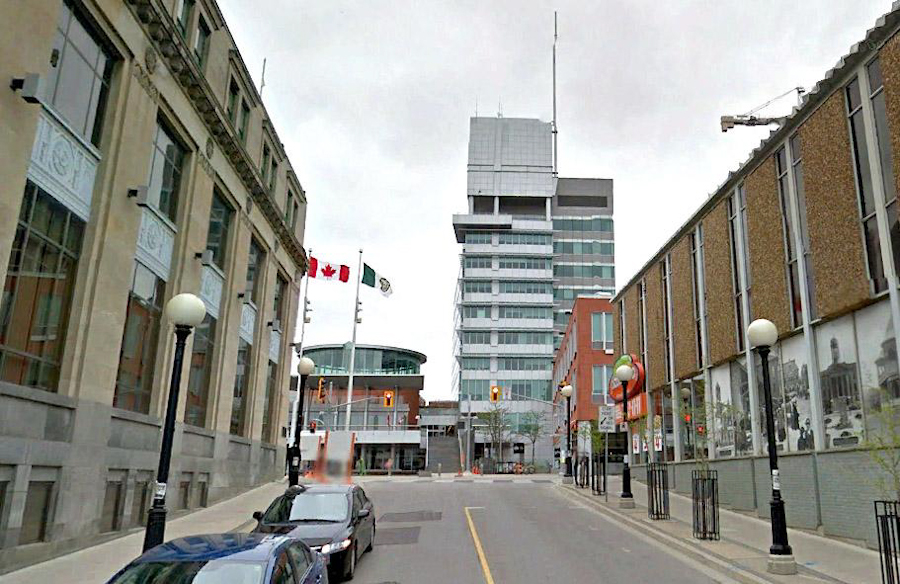 The Rotunda and administrative office tower and seen from Gaukel Street. 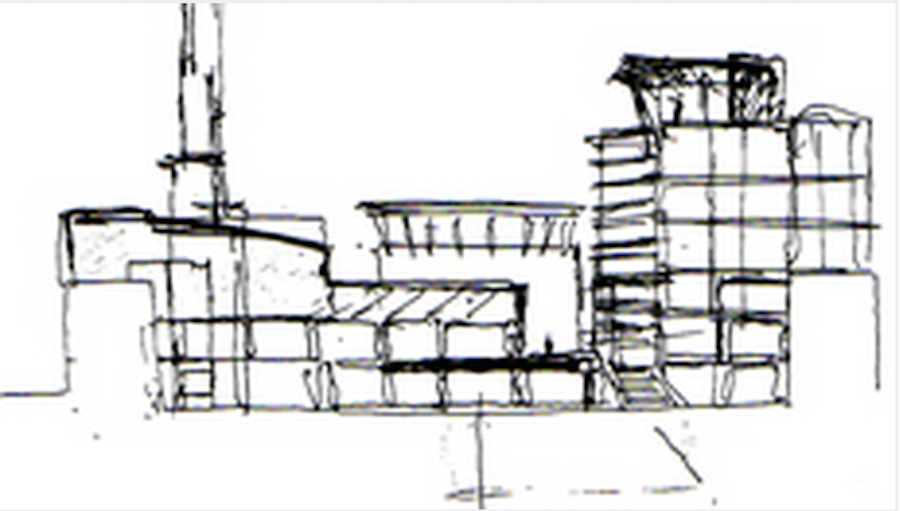 King Street is the primary level of public access and activity. Major components of the scheme, the Civic Square, and what are known as the Interior Square and Civic Rotunda are all accessible on the ground floor level. 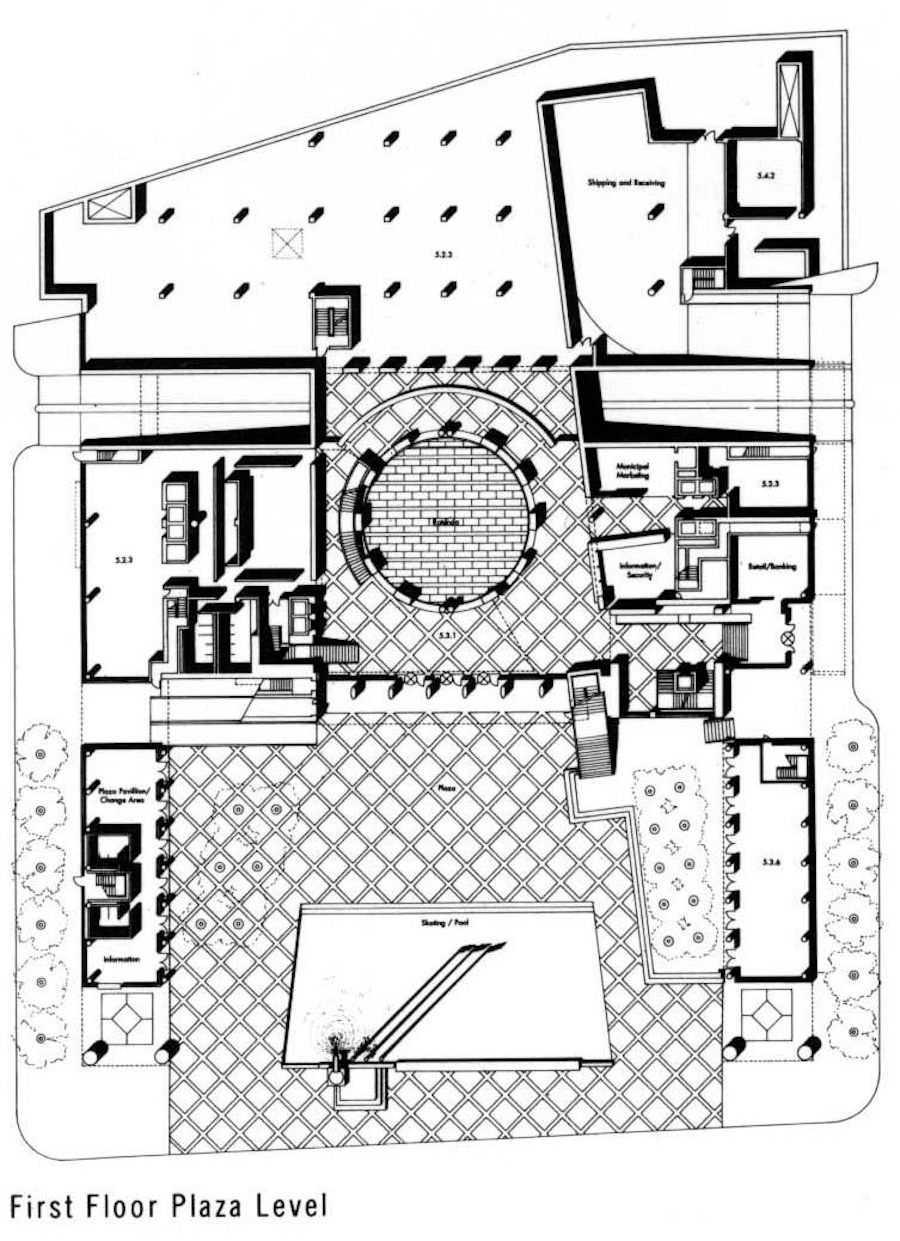 Access to below grade parking is from College and Young Streets. A protected drop off area is provided on Young. The Square is accessible at all four corners, inviting entry to the space and offering several choices on movement through the site. A pedestrian extension of Gaukel Street provides access up the steps and through the building to Duke Street. While the Civic Square accommodates outdoor public assembly the Rotunda is used for indoor assembly. These elements are transparent allowing those in one space to see activity in the other. The Interior Square containing the Rotunda is bordered on the left by a large committee room and those parts of the Clerk's Department requiring prompt public accessibility, and on the right by the information desk. 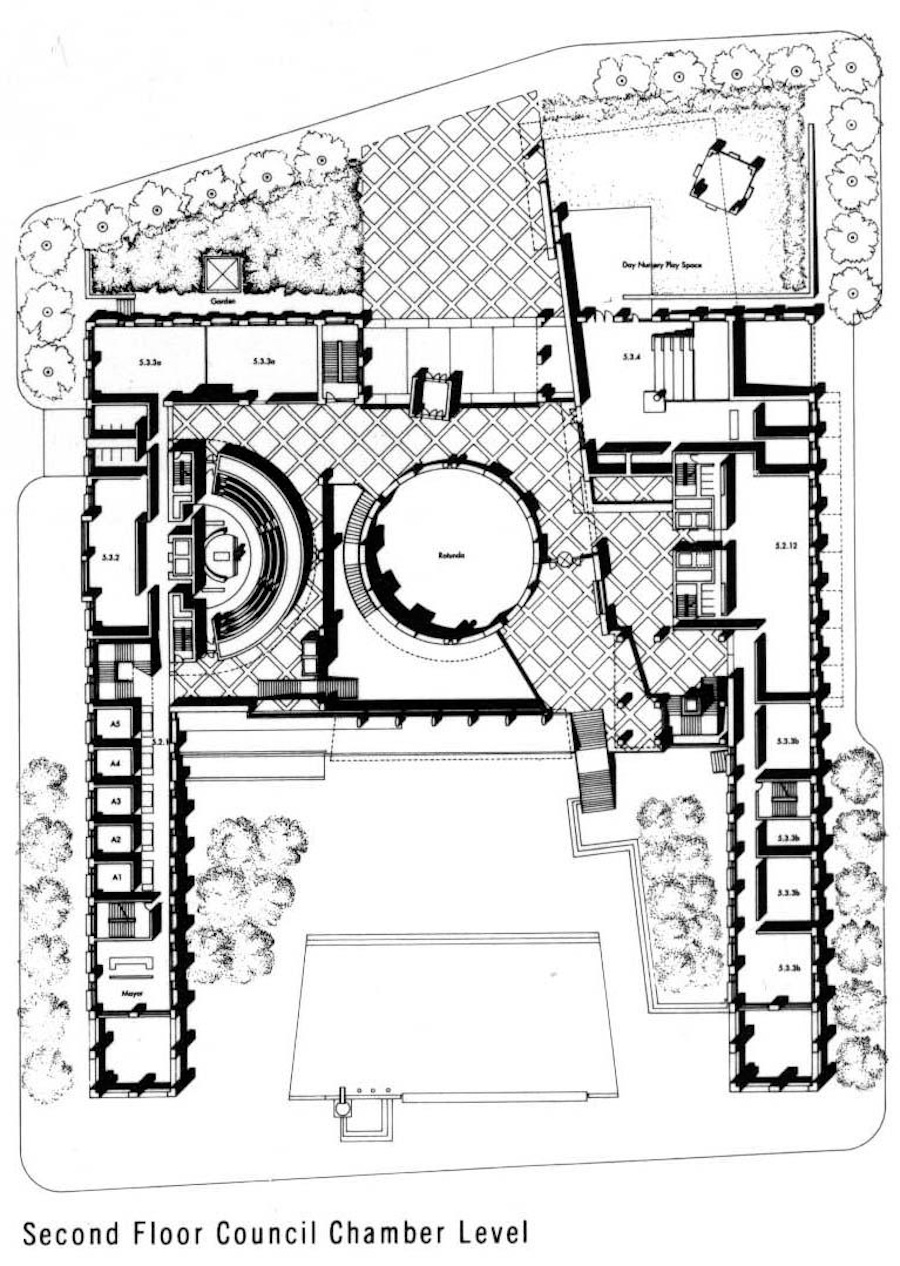 The second floor at the Duke street level overlooks the Interior Square and Civic Square. The Council of Chamber, the offices of the Mayor and Council members, the Council lounge, committee meeting rooms, a day care center and administrative meeting rooms are found on this floor, thus consolidating the building around the rotunda and providing convenient connections between the public, the Council and departmental staff.

The balcony overlooking the Civic Square toward King and Gaukel Streets. 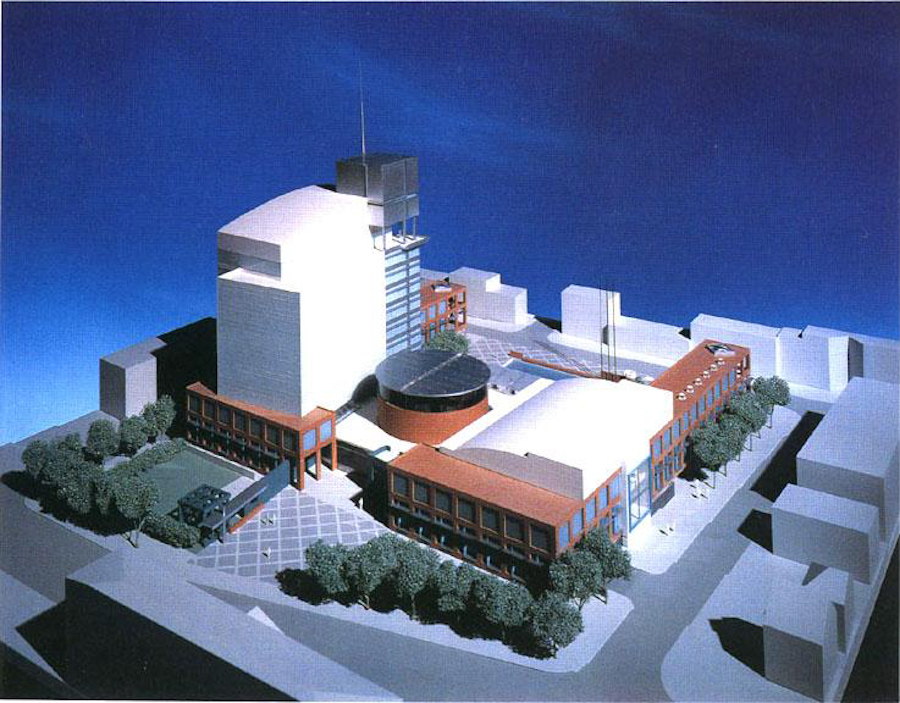 The model of the project viewed from the northwest corner and showing the small formal garden and the outdoor play area of the day-care facility forming a verdant edge to Duke Street.

An aerial view from the west of the completed project.

The Civic Square from King Street. 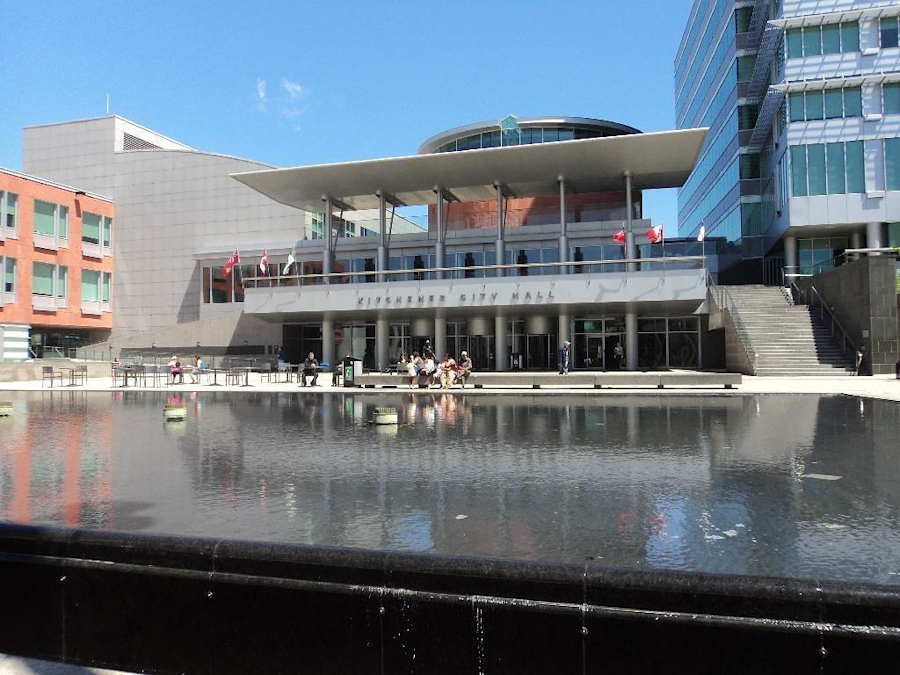 The reflecting pool, a year-round attraction to Canadians. 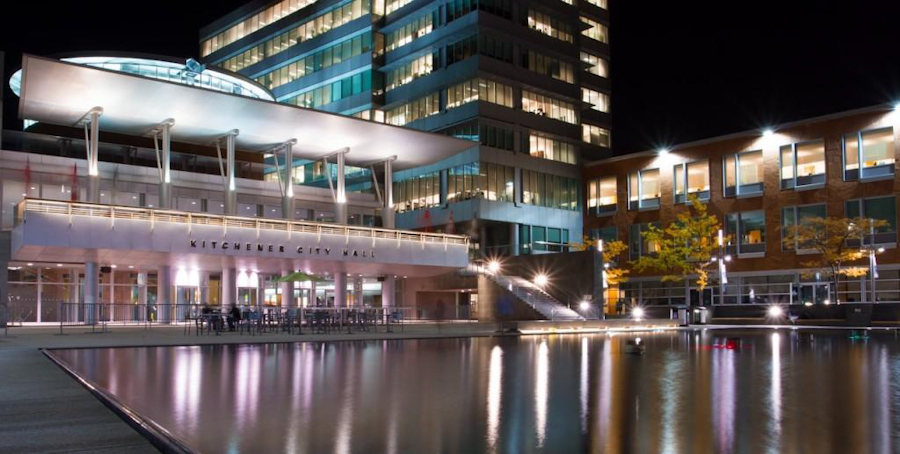 The Square at night. 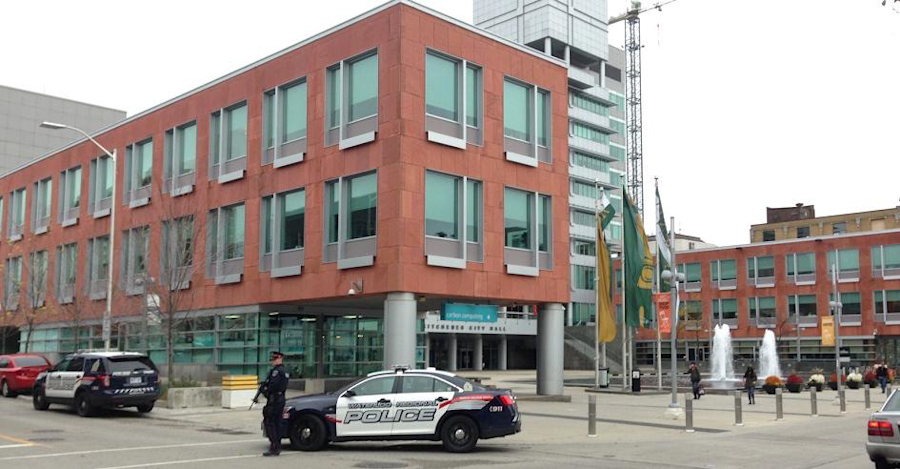 Civic Square from the corner of College and King.

The outdoor play space for the day-care facility.

The day-care garden from Young Street.

The building seen from Young Street, the upper end containing the entrances to the service area and the public parking.

The cladding of these publicly accessible offices and the Rotunda is a split face red sandstone imported from India. Domestic stone is used for the outdoor and indoor paving in the public areas of the building. 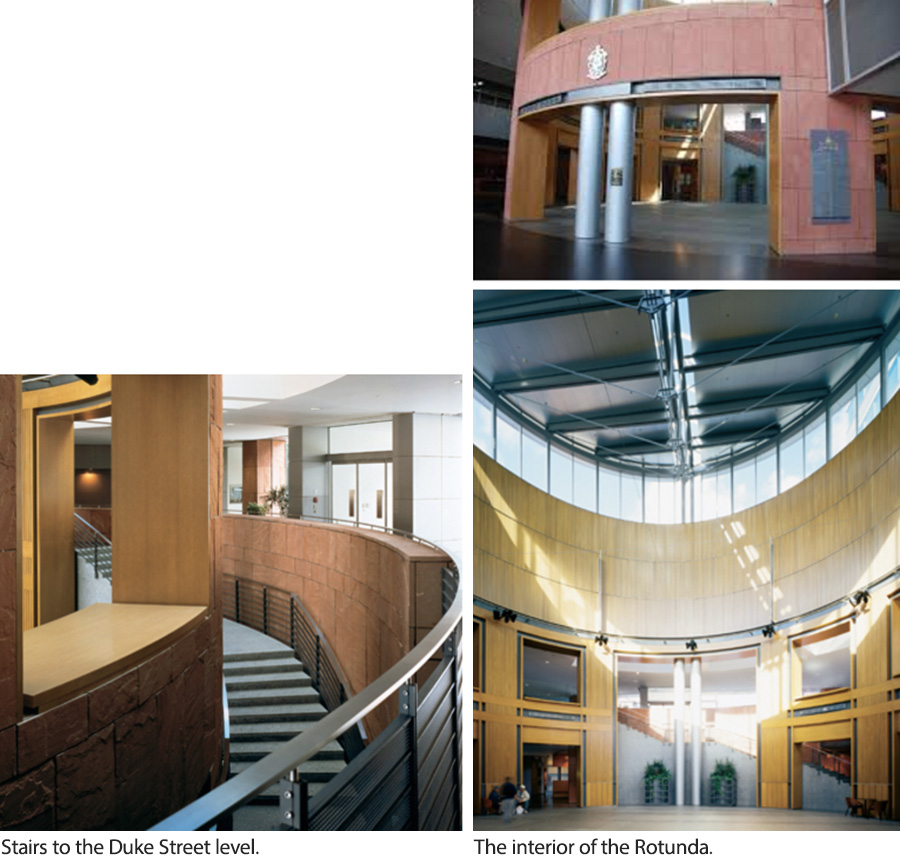 In the Council Chamber. 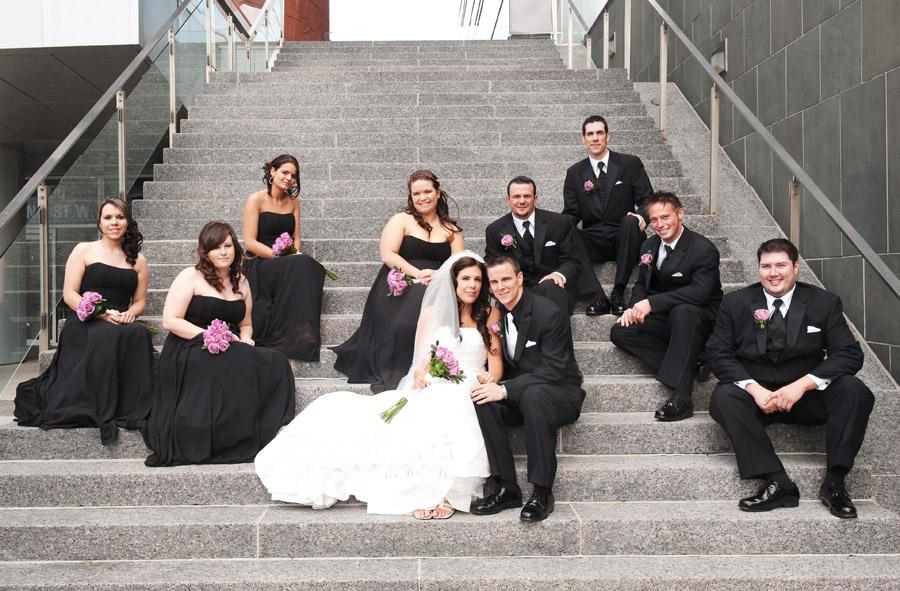 A wedding party on the steps. 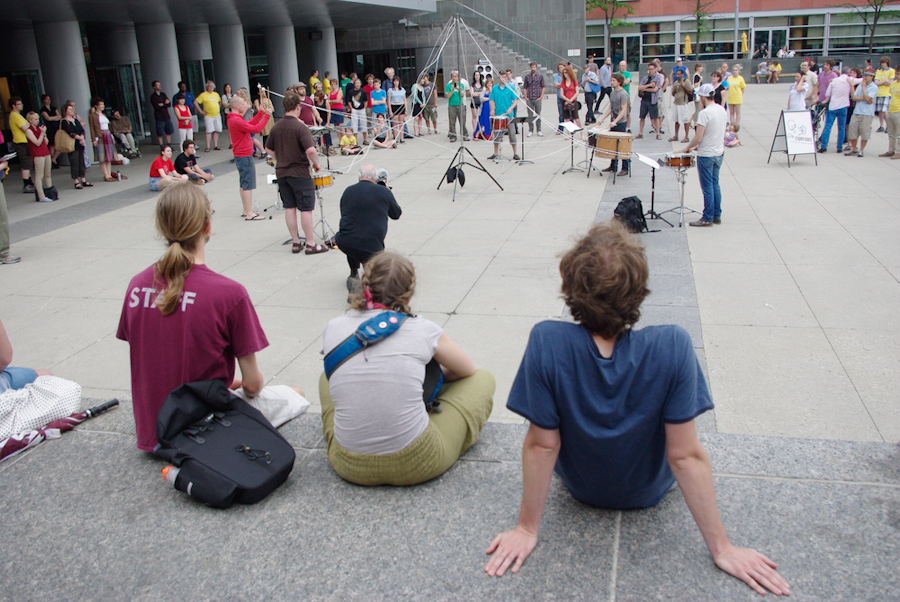 ‘Strings Attached’, one of the ’Between the Ears’ week-long music festival events in Civic Square. 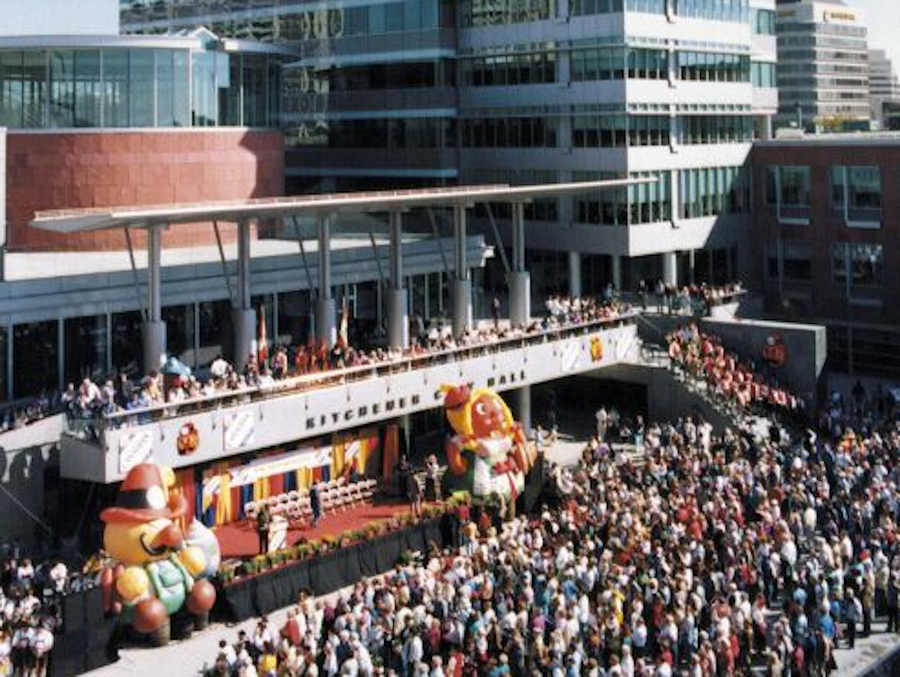 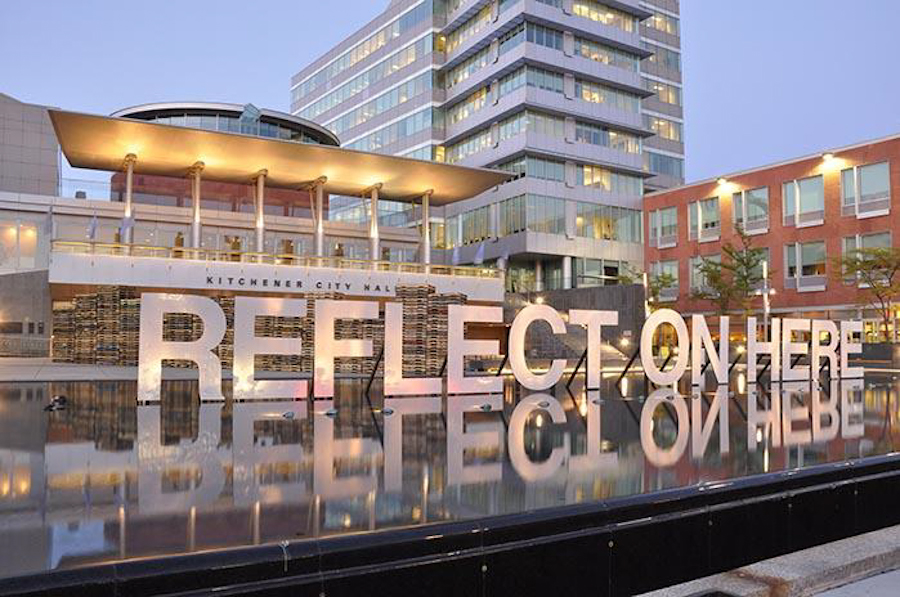 Project by a local sculptor.

The reflecting pool becomes a popular skating venue from November to March. 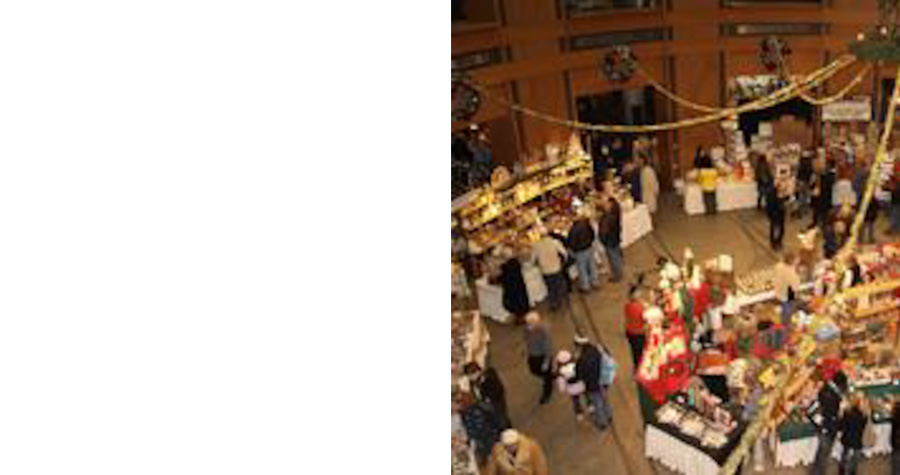 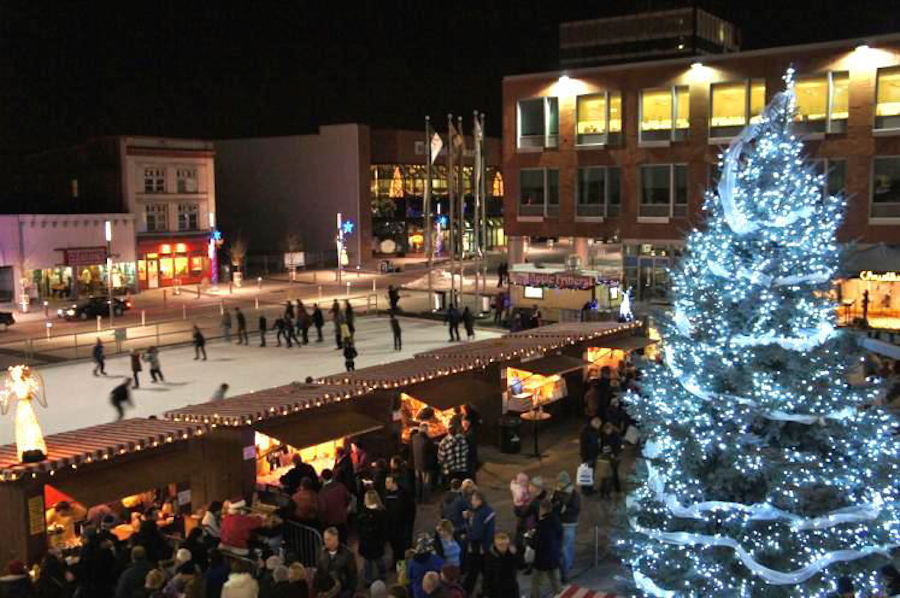 And in both the Square and the Rotunda the Chris Kringle market is a regular festival in December.