A shabby developer’s renovation of a large speculative office building which was mediocre when it was erected in the early ‘60s, presented to the supine residents of Anchorage with offensive ‘business management’ pretentiousness.

This is a horror story.

Anchorage is located just below the Arctic Circle, a latitude that is either discouraging or hostile to outdoor life for at least half the year.

But with close to 300,000 inhabitants, its mayor and councillors can no longer pretend that Anchorage is still a mere frontier town. 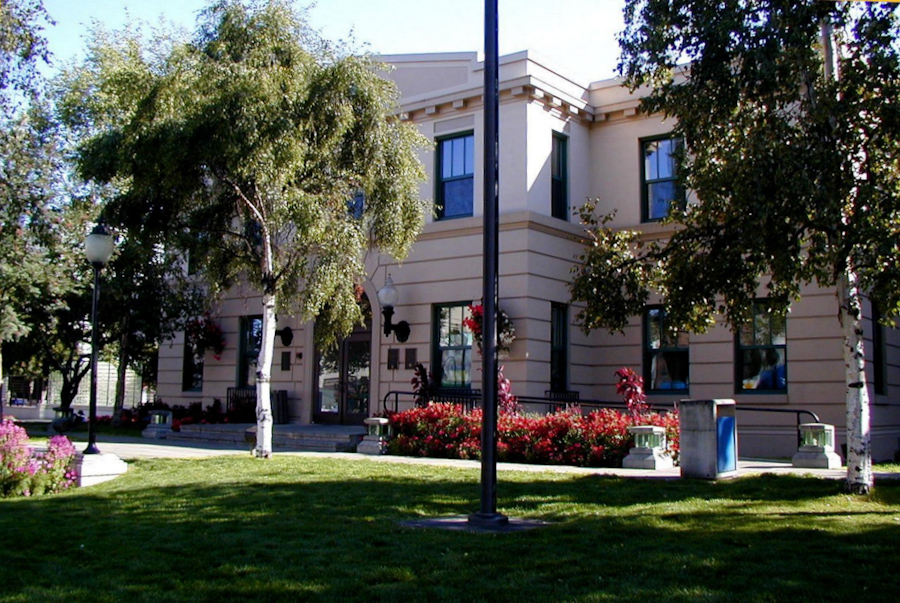 Indeed, its pretty little domestically scaled old City Hall of 1936 is now on the National Register of Historic Places, and as long ago as the early 1980s Anchorage boasted a founding chapter of the Liveable Winter Cities Association. But though it is one of the largest of several northern latitude and Arctic Circle cities with recently completed or designed city halls, one would never guess at such a history from its new City Hall.

As with Covington, Kentucky, and Marsden, Massachusetts, the new Anchorage city hall has been furnished by a developer, providing municipal administration space that may or may not include some indoor community facilities but exhibiting not the least concern for any outdoor interaction with its citizens, and only the most casual concern with establishing a civic identity. The Anchorage City Hall has been an office renovation project carried out by Pfeffer Development. “Our team”, they say on their web site, “provided a complete solution for the Municipality of Anchorage City Hall, including interim space to ensure seamless operations during transitions. We used a design-build process to renovate the Hill Building, which MOA [the Municipality of Anchorage] leases from a PD-managed [Pfeffer Development managed] entity.” 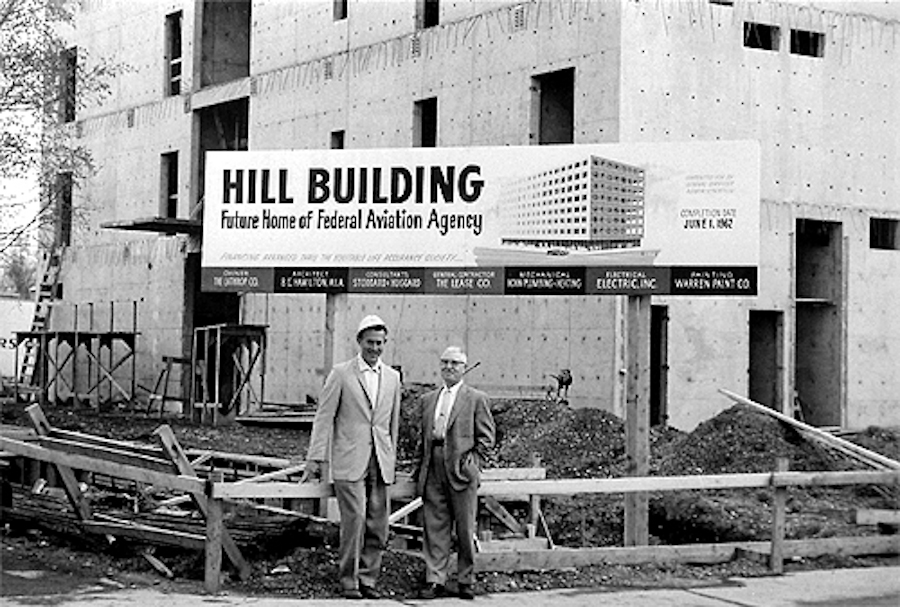 Don and Harry Hill in front of the Hill Building construction project, circa 1961.

The former Hill Building is on the corner of West 6th Avenue and G Street in downtown Anchorage, besieged by armies of automobiles arrayed in rank upon rank on the surrounding surface parking lots, and it must be the unchallenged ubiquity of this American urban condition that permitted the Pfeffer design-build team to do everything back to front, to assume that effort expended on establishing some civic identity for the new City Hall on the sidewalks outside its walls was largely a waste of time and that the place to make a show was on the service alley behind the building and the parking lot across from it. But they haven’t been candid about it. Their preferred views of the renovation, those they show on their web site, are taken chiefly from this service alley, but are cropped in such a way as to disguise its nature. 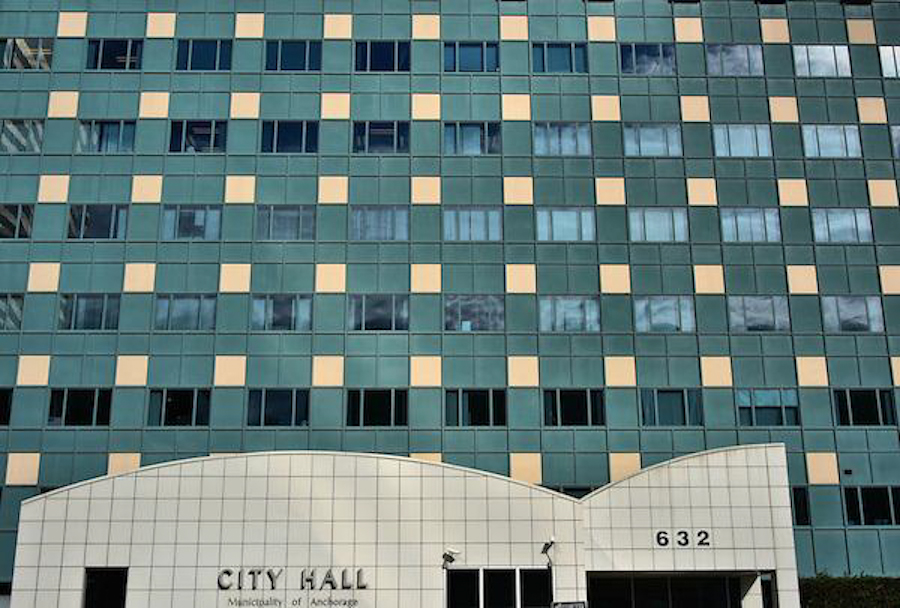 So here on the service alley the first of a couple of swoopy white-tiled protuberances adjoined to the rear facade displays a bold ‘CITY HALL’, while the second half-swoop carries an equally prominent street number over a generous opening, making the clearest possible declaration that this is the building’s front door. The fact that it receives its visitors from the parking lot beyond the flag poles across the alley is not disclosed on the web site. 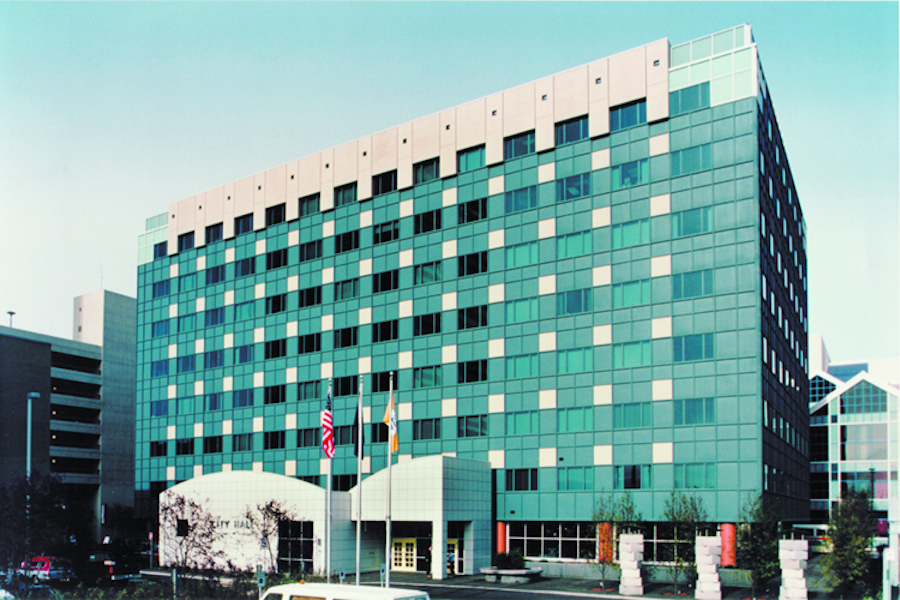 Never does Pfeffer Development offer us views like these, this one being taken across the parking lot from McGinley’s Pub at the G Street end of West 7th Avenue.

This one from the mid point of the parking lot, framing the entry to City Hall (which now shows no trace of the once prominent street number) with a row of young trees that already obscure the flagpoles at their far end.

And this one, at where Alaska’s Gourmet Subs abuts the other end of the parking lot.

Approaching the building on G Street one discovers that the large protuberance adjoining the entry canopy and bearing the announcement of ‘CITY HALL’ is actually a service bay for city vehicles, a somewhat promiscuous collision of the mundane with the honorific which must be seen as inevitable if ‘back of house’ is allowed to become ‘front’ and ‘front’ to become ‘back.'

Around the corner on West 6th Avenue the building gets its new name impressed in a couple of concrete planter boxes. 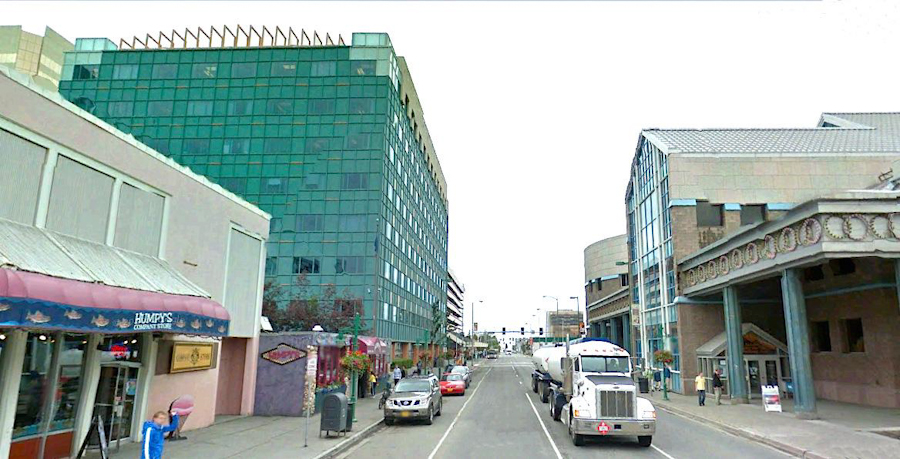 Coming to the building from the other direction one finds a tree lined pedestrian path leading down the side of City Hall to the new entrance around the back. 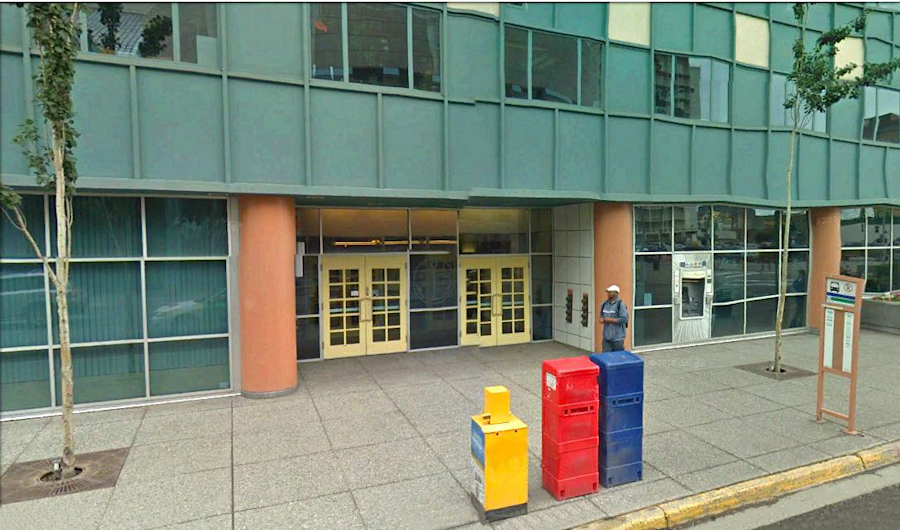 But if you miss that there is always the former front door to admit you if you must, its drab recessed entry gaining no more attention than the neighboring fire plugs, the shiny automated teller machine installed in the sidewalk glazing and miscellaneous items of alarmingly cheerful, Lego-like street furniture. Note also the pair of ignominiously neglected and attenuated trees that clearly have no place here. 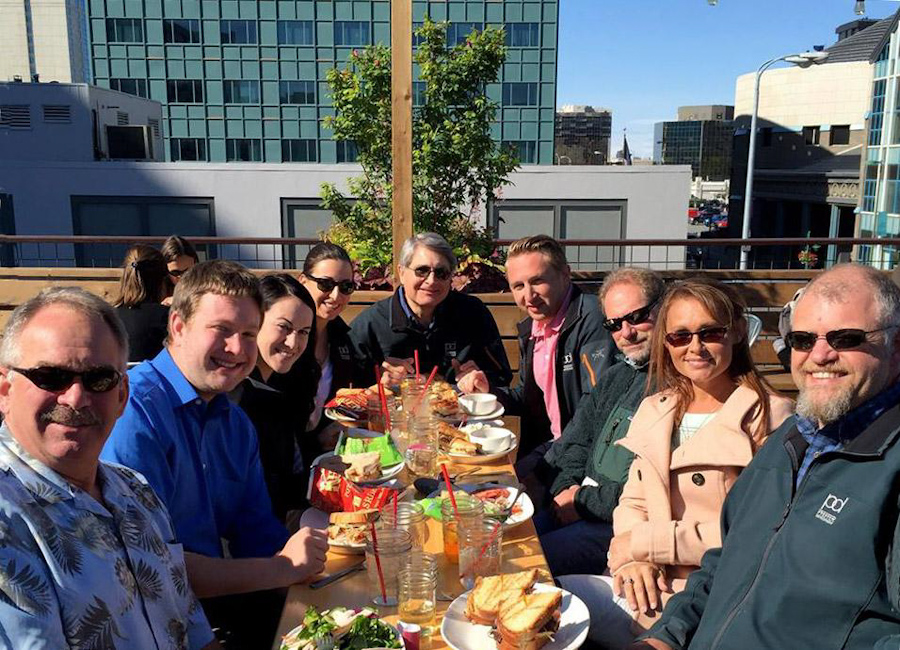 So the Anchorage City Hall has been delivered back to front but this has not been broadcast by those involved and appears not to have caused demur among an indifferent public, glad only of uninterrupted municipal services and a cheap deal that may not raise their taxes. But one cannot help thinking that the chief beneficiaries of the deal have been the folks at Pfeffer Development. Here is a gathering of their number just a few doors away from City Hall, taking lunch together in cheerful celebration of something or other, and draining their sober iced tea in the bright Alaskan sun.