An extremely modest compound of town hall, public library and a few small shops and apartments, both robustly down-to-earth and exquisitely playful in the exacting climate of the Arctic Circle.

Here is another gem. This charming little town hall was a salutary post-war affirmation by Alvar Aalto, Finland’s internationally prominent architect, of a reassessed, craft based modernism which, like Le Corbusier’s Maisons Jaoul of the same period, exerted a powerful influence on many thoughtful members of the profession, an influence that extended to those in my generation.

Säynätsalo is a municipality of three rugged islands in Lake Paijanne, about 170 miles north of Helsinki and, at 62 degrees north latitude, not so far from the Arctic Circle. 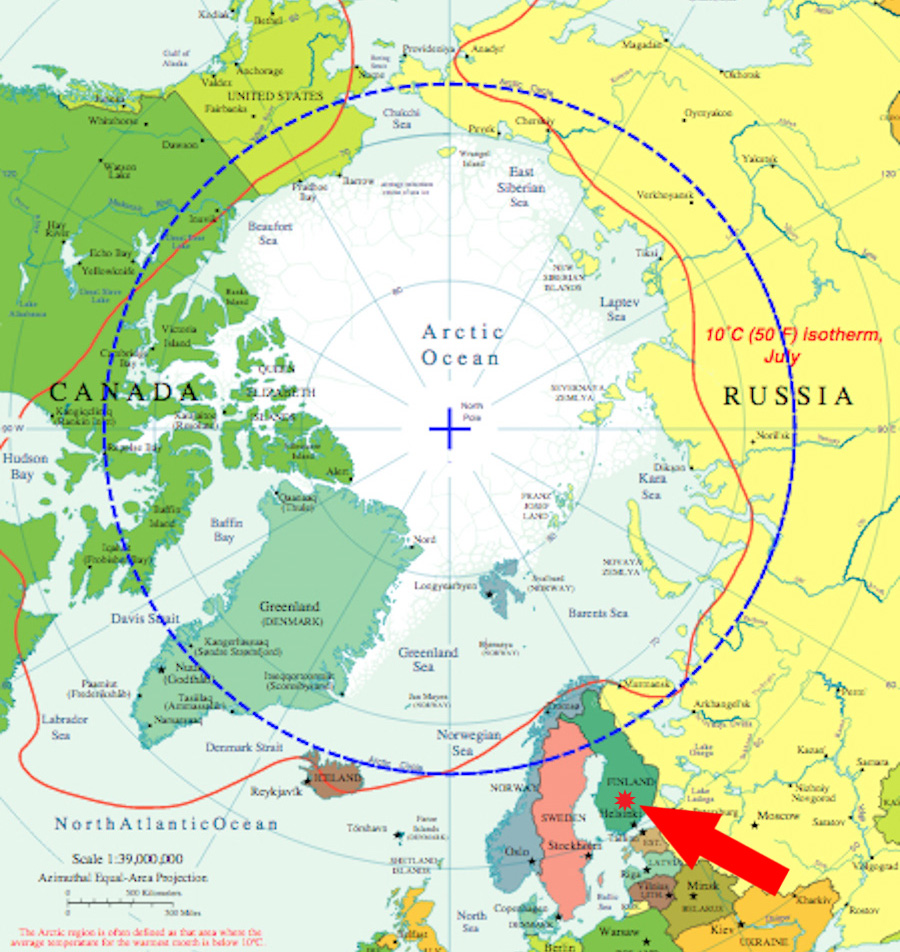 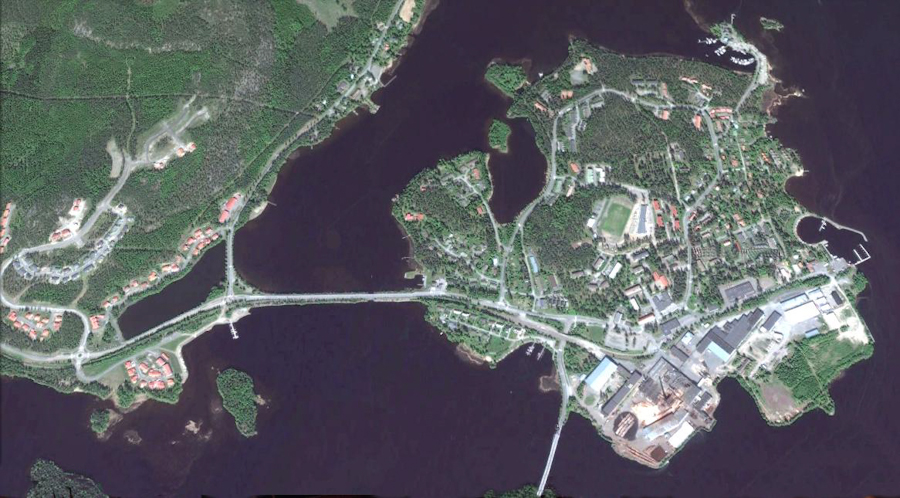 It began as an industrial community in 1897, when Johannes Parviainen bought the main island and set up a saw mill. In 1914, a plywood mill was started and in 1940, a factory prefabricating houses. By the time the town hall was built, some 3,000 people lived on the island, half of them employed in the factory. 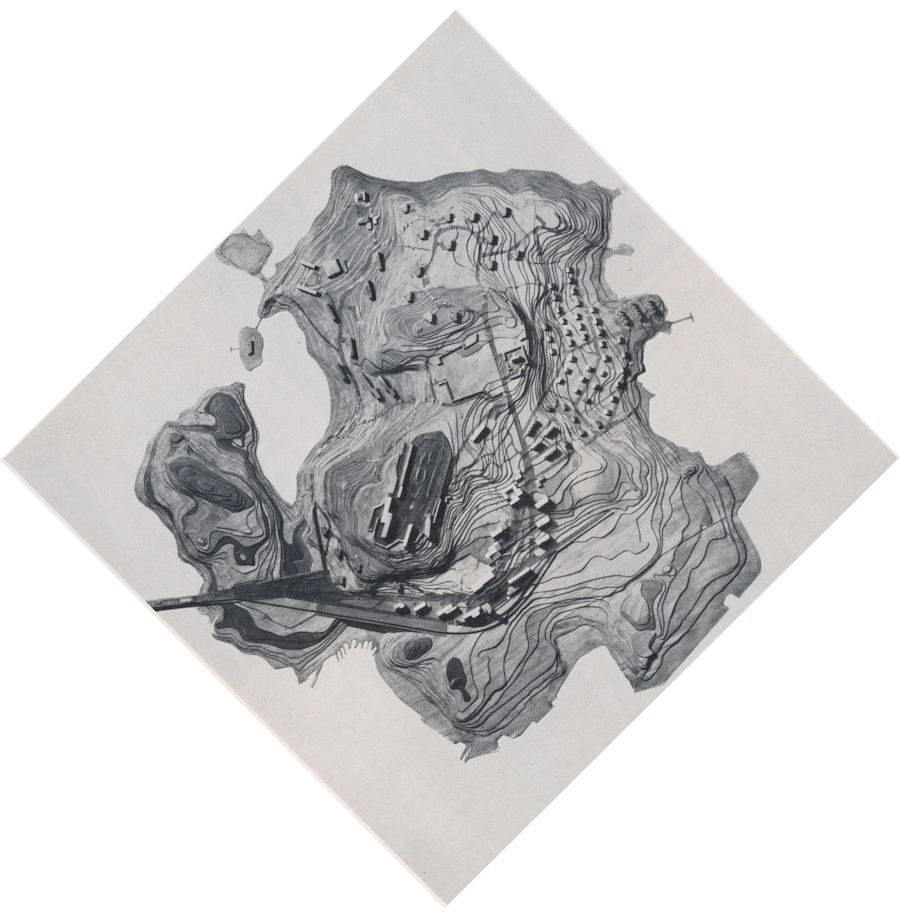 The plan for the permanent settlement, locating the site for its town hall and library, had been designed by Aalto in the mid 1940s. The town hall is the courtyard building, the last significant structure on the inside of the bend in the road rising up through the island,

and while the entire town seems to be scattered among the trees it is anything but a frontier camp.

Second and Third Floor Plans. The south-facing Town Library is separated from the inverted U of the Municipal Offices by the granite eastern steps giving access to the elevated courtyard (raised by saving the spoil from foundations dug deep to find stable support below the frost line) and the broad, grass-covered western steps offering the librarian a quiet place for a summer afternoon children’s story. The Council Chamber is in the third floor tower. At grade beneath the Library are small shops and beneath the east and west sides of the Offices are apartments, providing a reserve of space for any future expansion of municipal services.

A section through the building looking east to the Council Chamber tower, with the Library and shops below it on the right.

West elevation showing the entry to two ground floor apartments and the grass steps. Note the multiple rhythms established in this facade, first, by the recession of the wall, retreating in shallow increments from the chimney stack at the north end toward the steps in the south, then by the varied window openings, and finally by the vertical lines incised in the upper brickwork with the same repetitive dimensional regularity as the ticking of a metronome. The explanation for their existence is that this brickwork encloses the unheated attic space of the building and in the winter the grooves prevent the formation of a frost line. But if strung together like the perforated sheets of an electrocardiograph, these elevations may be read as a musical score: quite literally, architecture as frozen music.
This deliberate musical property of the design was suggested one day in 1964 by a student in my First Year Studio at the Architectural Association School in London, who had been assigned Saynatsalo as part of a formal analysis exercise. "Indeed you’re quite right," exclaimed David Heal, an architect and musician who was participating in the review, "it’s a fugue and I shall play it for you." Which, one memorable evening a week or so later he did, together with a pianist colleague, in a splendid performance at paired pianos in the A.A. Member’s Room. The piece played more powerfully with two pianos so we were fortunate that David Heal was a scion of Hael’s, the renowned contemporary furniture and lighting company, for whom moving a second grand piano in and out of Bedford Square was all in a day’s work. 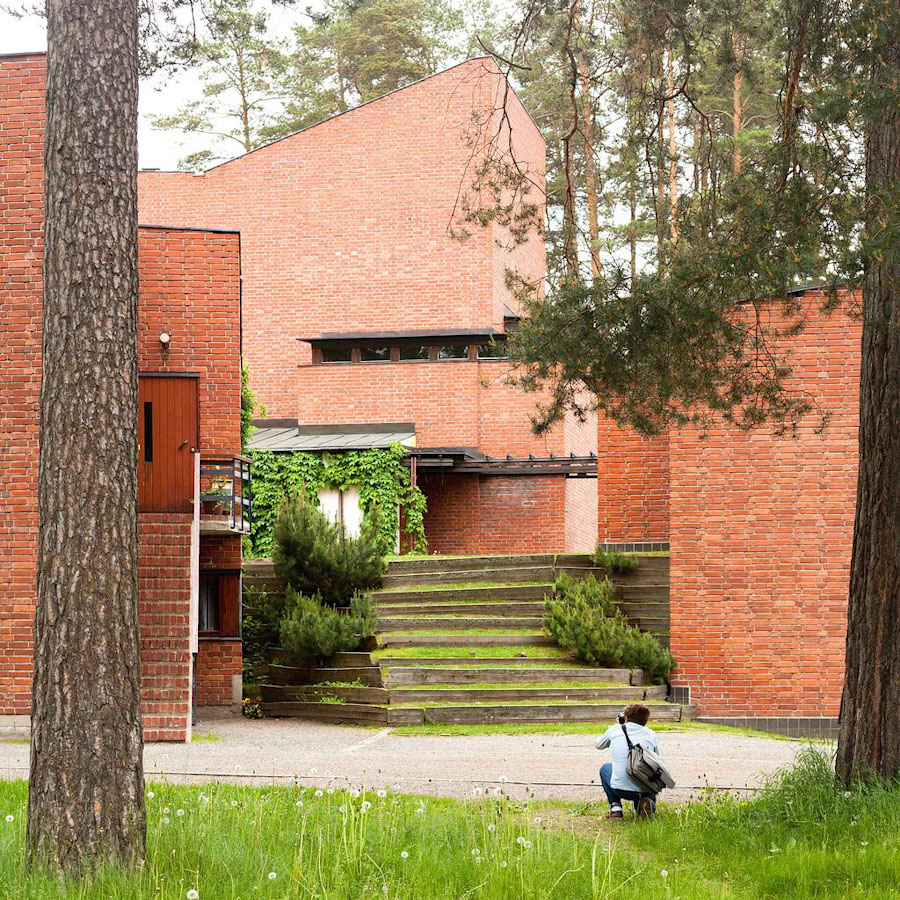 The grass steps. Note, on the left, the brick paved stair to the municipal offices, originally a small upper level apartment. The entry to a third ground floor apartment is tucked in beneath this stair.

South elevation showing the shops with the Library above 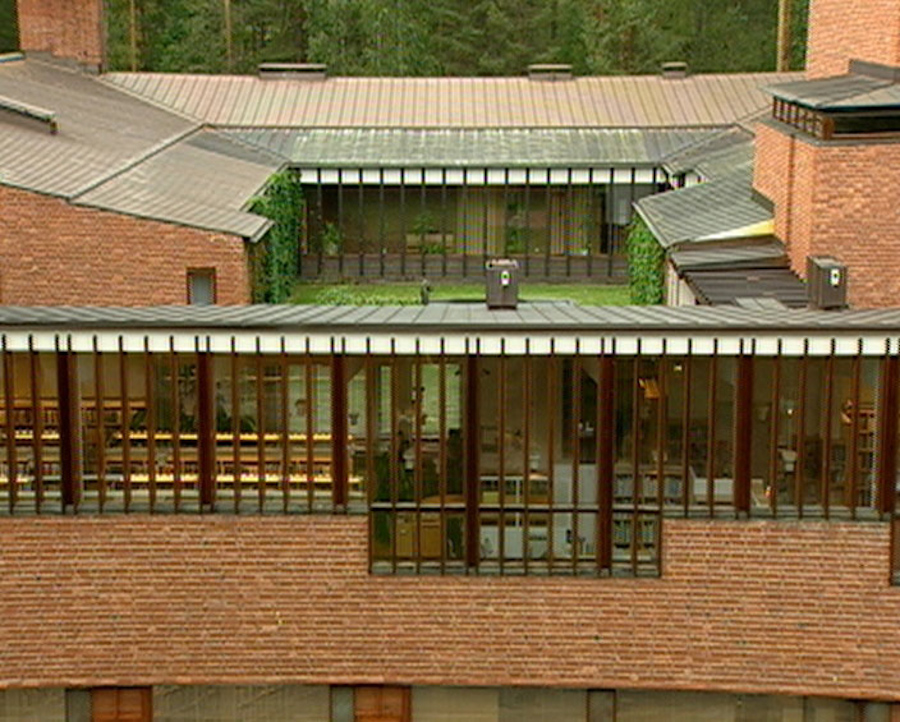 View across and through the Library to the courtyard and the north corridor of the Municipal Offices. 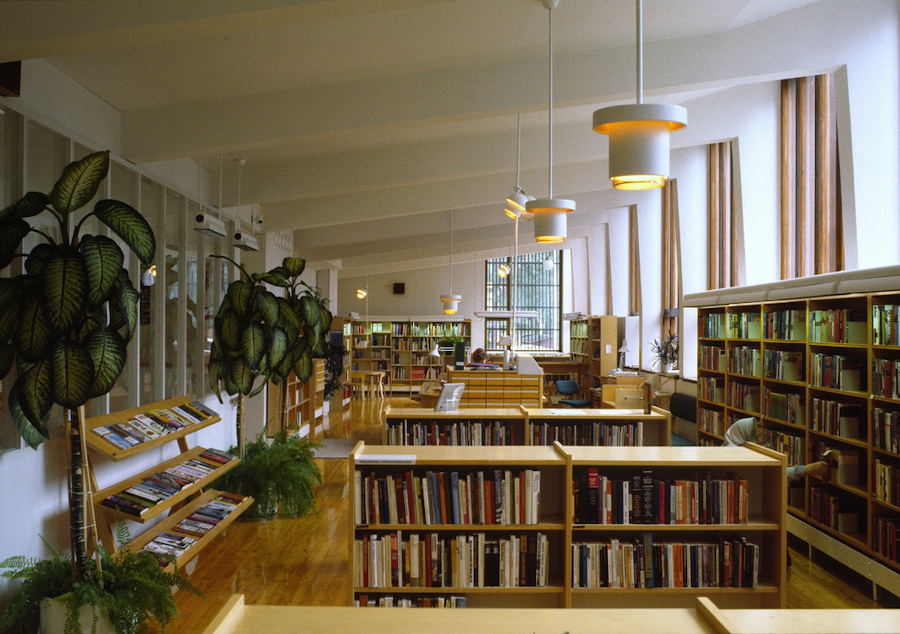 The Library embraces as much sunshine as its 62 degrees of latitude will afford. 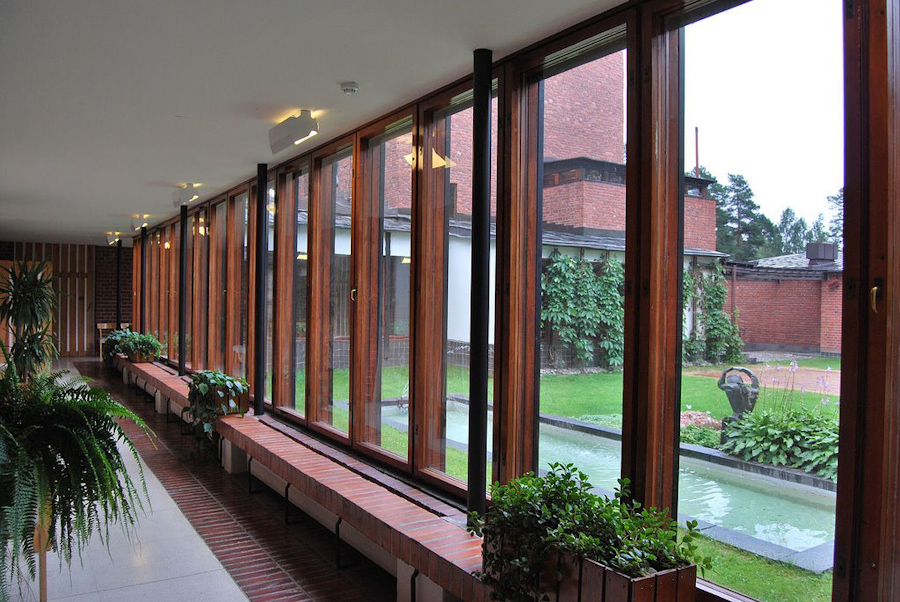 The north corridor in the municipal offices.

The granite steps of the main entry at the east end of the Library, adjoining the Council Chamber tower.

Views of the entry to the Municipal offices and the vestibule with the stairs to the Council Chamber.

Views showing the two levels of entry to the Council Chamber, the lower for both councillors and members of the public, the upper to additional public seating. 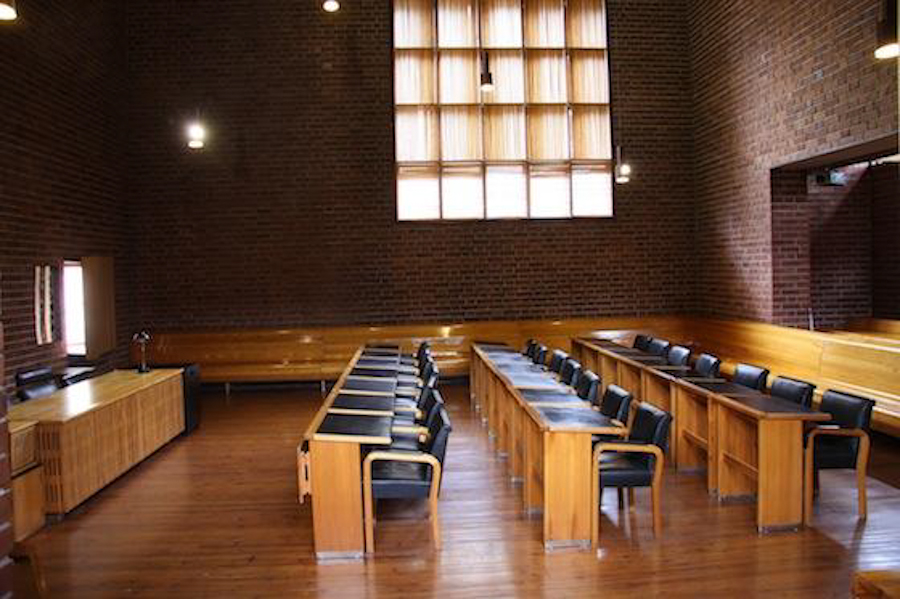 The chamber, showing the councillor’s benches framed by public seating and illuminated by the large, shadowless window in the north wall. 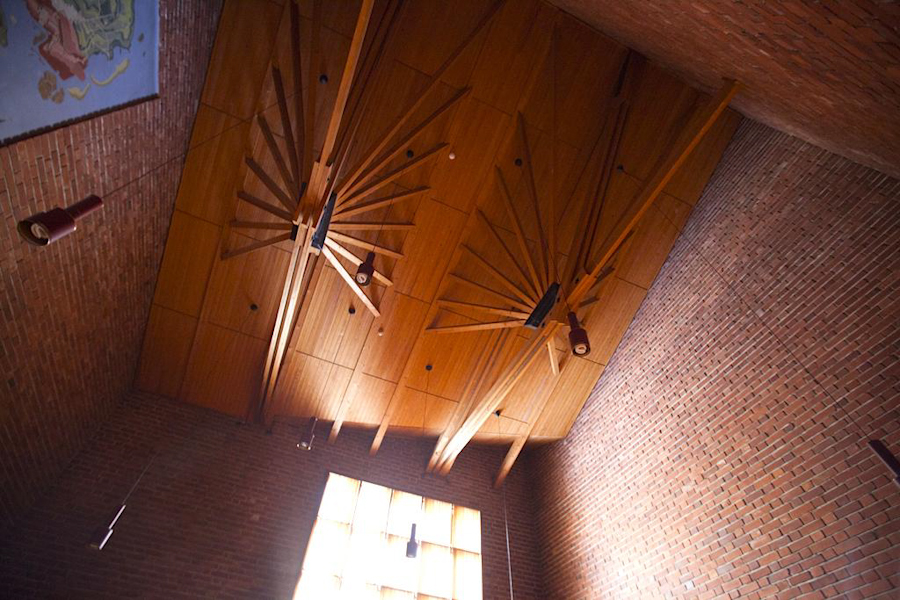 The timber roof and its two elaborate trusses crowning the the soaring volume of the tower. When asked about the great height of the tower, over 55 feet, Aalto is reported to have said,

‘Gentlemen! The world's most beautiful and famous town hall, that of Siena, has a council chamber 16 meters high. I propose we build one that is 17 meters.’